Wondering what it takes to make the PERFECT Iced Tea? Wonder no more. This guide on how to brew iced tea covers the history of iced tea and tea brewing methods for the perfect pitcher of tea. We’ll share how to make sun tea. How to cold brew tea. The ideal way to make the Southern Staple, Sweet Tea, and even make iced tea.

You Choose the Best Method and type of tea, and let’s get started.

What is Iced Tea?

In America, there is traditional Iced Tea and Sweet Tea.

The only difference is the sugar.

When done correctly, iced tea might be more complicated than it first appears, but it’s worth the effort.

While some may think making iced tea is simply placing hot tea in the refrigerator and letting it cool, there are a few more basics to making a refreshing glass of iced tea.

So? Read along, get your tall glass and ice cubes and let’s make the perfect glass of iced tea.

Did you know? The only state to ever produce tea commercially, and the first place in the United States that tea was grown in South Carolina.

The tea was planted in modern-day Middleton Place Gardens, near Charleston.

Historians seem to concur that French explorer and botanist Andre Michaux imported tea and other beautiful plants such as gardenias, azaleas, and camellias.

In 1995, South Carolina’s grown tea was officially adopted as the Official Hospitality Beverage of the state.

The oldest tea recipes date back to the early 1800s.

These recipes were made with great tea rather than black tea and were called punches (they were also spiked heavily spiked with liquor).

Ice Tea’s popularity gained with the introduction of the ice house.

Tea imports were mostly exclusive to the United States from India, a producer of black tea. 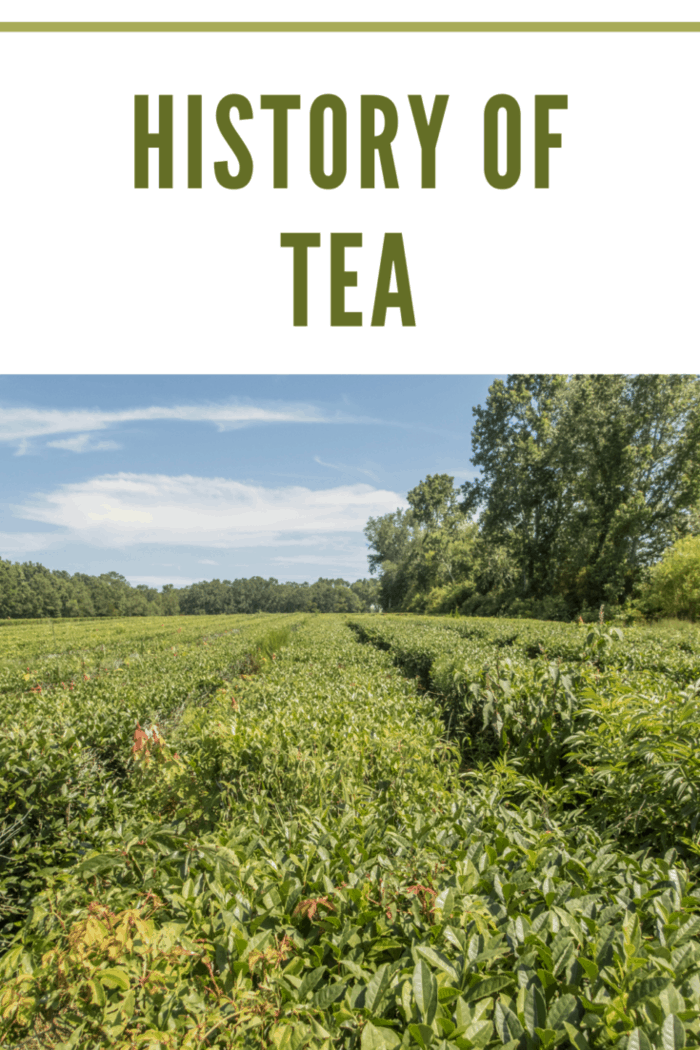 Credit for popularizing iced tea goes to Richard Blechynden, Director of the East Indian Pavilion and India Tea Commissioner of the 1904 World’s Fair in St. Louis, Missouri. He was giving complimentary hot tea to fair-goers.

The heat was intense, and Blechynden realized this kept folks from drinking his hot tea.

In a move that commercialized iced tea, he and his crew filled several large bottles with their brewed India tea, placed the bottles on stands upside down, and fed the tea through ice-cold pipes.

A thirsty crowd loved the tea so much that Blechnynden headed to New York City, demonstrating iced tea as a refreshing drink on a hot summer day to shoppers at Bloomingdale Brothers Dept. Store.

Turn the calendar back to 1879, and open the pages of Housekeeping in Old Virginia, a community cookbook by Marion Cabell Tyree.

I’m sharing here in case you want to give this sweet tea recipe a try:

“Ice Tea. – After scalding the teapot, put into it one quart of boiling water and two teaspoonfuls green tea. If wanted for supper, do this at breakfast. At dinner time, strain, without stirring, through a tea strainer into a pitcher. Let it stand till tea time and pour into decanters, leaving the sediment in the bottom of the pitcher. Fill the goblets with ice, put two teaspoonfuls of granulated sugar in each, and pour the tea over the ice and sugar. A squeeze of lemon will make this delicious and healthful, as it will correct the astringent tendency.”

Black tea, which is the choice of Southerners today, shows up in print sometime in 1884 on page 112 of Mrs. Lincoln’s Boston Cook Book: What to Do and What Not to Do in Cooking.

“Ice Tea or Russian Tea – Make the tea by the first receipt, strain it from the grounds, and keep it cool. When ready to serve, put two cubes of block sugar in a glass, half fill with broken ice, add a slice of lemon, and fill the glass with cold tea.”

Due to the combination of sugar, tea, and ice, sweet tea–all of which were expensive and had to be shipped) was seen as a luxury. 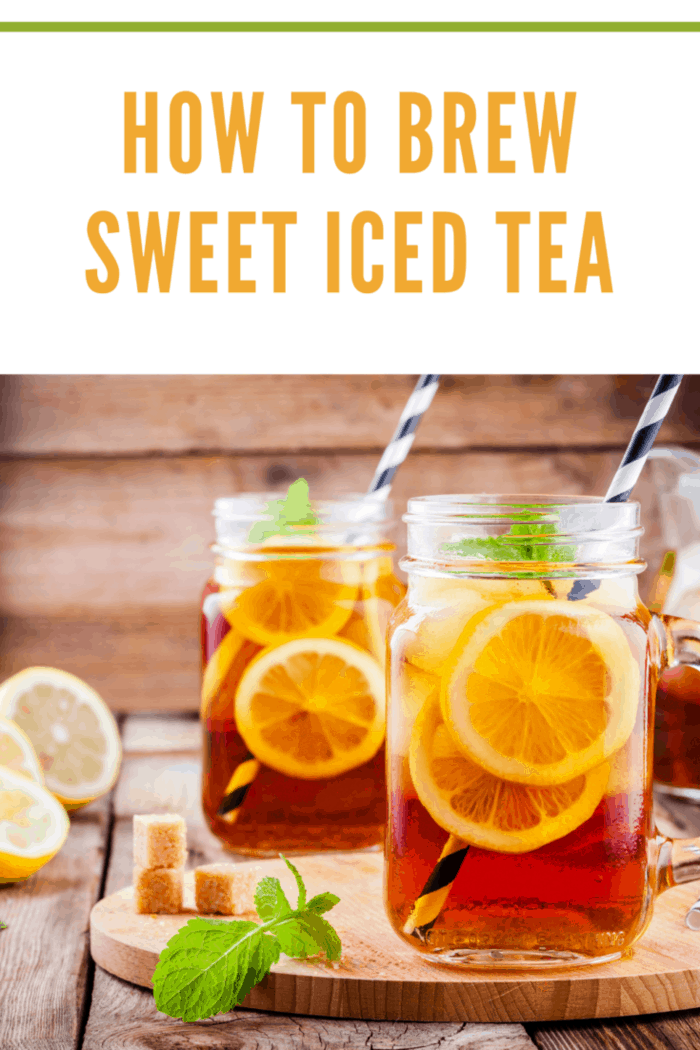 There are so many ways to brew delicious iced tea beyond the hot water method.

There’s no best way–whether you love hot brew or cold brew tea, you’re sure to find one of these methods that makes the best iced tea.

Each of these brewing iced tea approaches is worth trying as they offer a subtle difference in taste.

Once you’ve tried these brewing methods, you’ll find preparing iced tea is simple, and the rewards are delicious.

All of these techniques can be used for the health benefits of tea, like healing or just for enjoying how refreshing tea tastes.

We will start with the hot tea brewing. It’s most common. Brew hot tea as you normally would, usually 1-2 tea bags per cup, add ice to the glass and pour tea over ice cubes.

To prevent dilution of the tea flavor, it’s recommended to chill the tea before pouring over the ice.

Sun tea uses the sun’s heat as the heat source for brewing the tea.

Since this brewing method uses boiling water, it needs to be refrigerated and consumed within a day or two of making.

Put four or more tea bags in a 2-quart pitcher to 8 tea bags for a gallon container (use glass containers, rather than plastic containers for best results) with a lid.

Fill with water and cover.

Place outside for 3 to 5 hours, sunlight reaching the container.

Remove container from the sun and place in the refrigerator–you can remove the tea bags if you like, but it isn’t necessary. 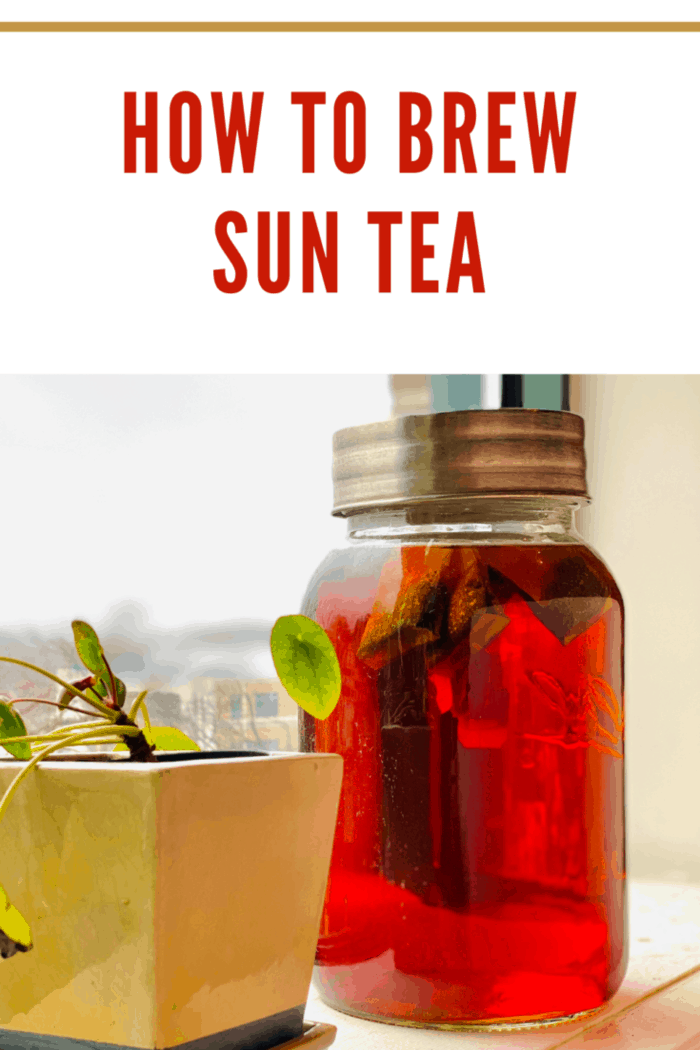 The cold brew method for tea is similar to sun tea, but instead of placing in the sun, and the cold brewing uses the refrigerator.

The heat brings out the tannic, bitter flavor in tea.

This also applies to coffee.

This method may be the most simple.

Place loose-leaf tea or tea bags in a pitcher with cold water (or at room temperature).

Place the pitcher with tea in the refrigerator.

White tea or green tea should steep for six to eight hours.

Oolong tea or black tea is best steeped for eight to 12 hours.

Note: if using loose tea leaves without tea sachets, you’ll need to strain the tea using a cheesecloth or a fine-mesh strainer before drinking.

Keep covered and refrigerated cold brew iced tea for a fridge-life of three to five days. 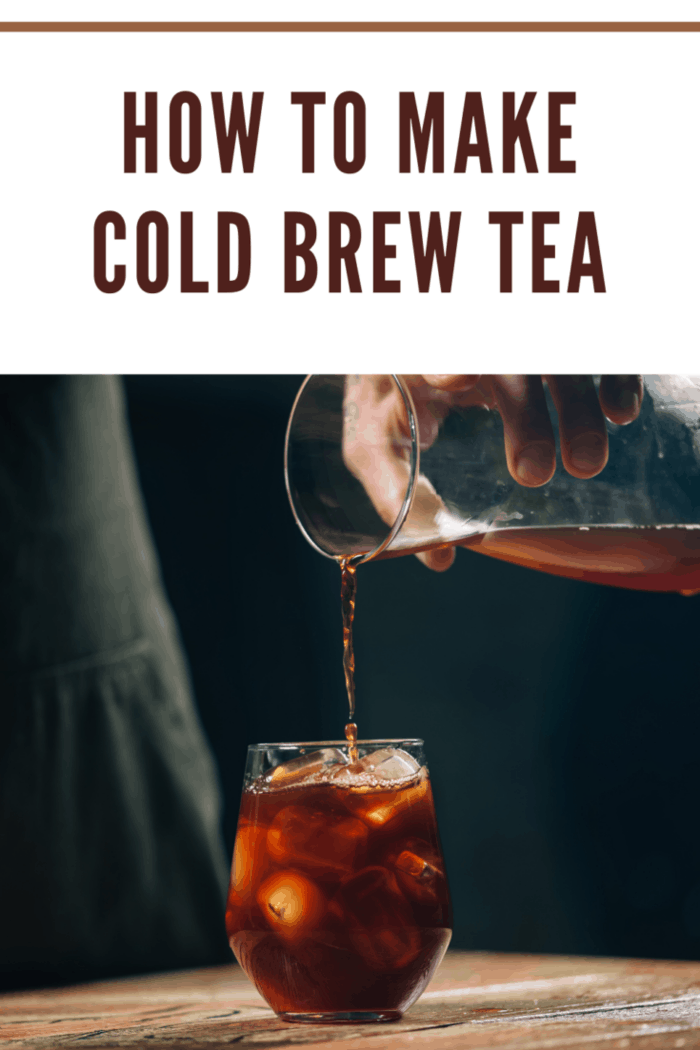 You’ll use a higher tea ratio to water than average for this brewing method.

To concentrate, each gallon of water should use 15-20 teabags.

Add the tea concentrate to iced water, increasing the amount for stronger tea.

Boil 2 cups of water and prepare a pitcher of tea as you normally would.

We like to use about eight whole tea bags for a pitcher (2 quarts), adjusting depending on how strong you like your tea.

If you don’t like strong tea, use six tea bags; use ten teabags if you want your tea stronger.

We find 8 to be a suitable medium.

While brewing your tea, make a simple syrup by boiling one cup of water and 3/4 cup of sugar, stirring and mixing this combination as it heats.

Refined white sugar is the most common way of sweetening iced tea due to its clean flavor.

If you are making iced tea strong or with spicy black tea, try using brown sugar such as Demerara or Turbinado) for a rich molasses flavor.

Suppose you are using a sugar alternative, such as Splenda. If that will dissolve easily in water, skip this step and add 1/2 cup (or more depending on taste) of Splenda or another sugar alternative directly to the water.

This Southern Iced Tea with Fruit Recipe uses a sugar alternative, but you can switch to traditional cane sugar if you like.

After steeping the tea bags, add the sugar mixture, then mix well.

Add 3 cups of cool water and one pinch of baking soda to a pitcher and then mix in the sweetened tea concentrate.

Chill in the refrigerator or enjoy poured over a handful of ice.

Try all these brewing techniques.

No matter which one you choose, pour your homemade iced tea over a glass of ice and garnish with lemon, fresh mint, fresh fruit, etc.

And of course, there’s nothing wrong with a cup of hot tea–but that can wait until the weather cools down.

5 Herbs Perfect For Your Everyday Tea

How To Make Traditional Chinese Tea