Auli’I Cravalho and Her Mom Talk #Moana and The Rock

As August was just heating up, we took a seat at a long conference table, in a room somewhere on Disney’s Burbank lot. To be honest, the room was bland. There were windows that let in light, but it seemed dull and hollow.

There are people who seem to light up any room they walk into. There’s just something so magical about them. Auli’i Cravalho is such a person. 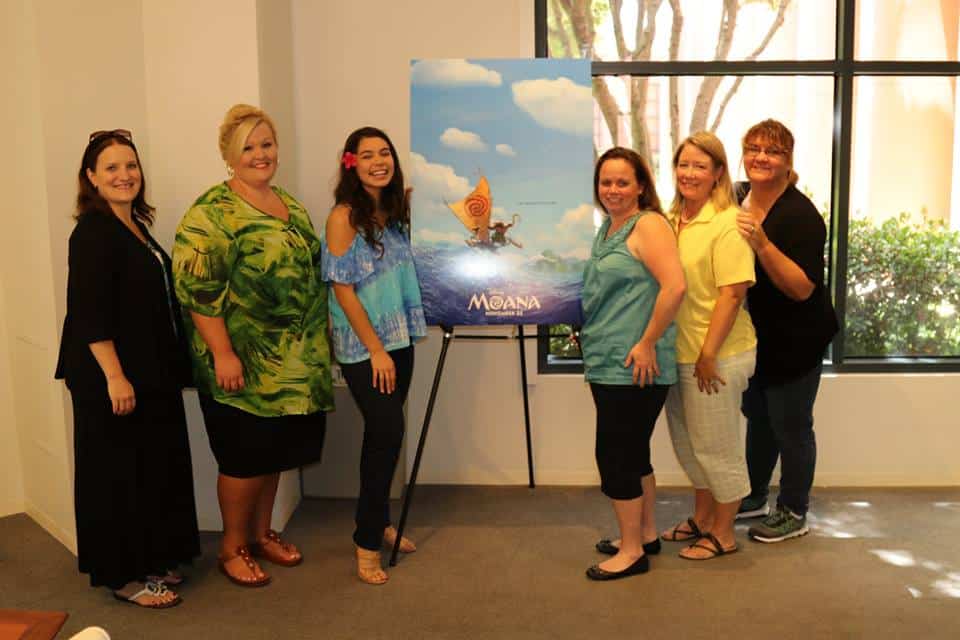 She walked into the bland room and suddenly it seemed brighter. Her smile seemed to span the universe and send all the beauty back into the room. With her is a woman who radiates the same beauty, her mother.

I had seen the video where Auli’i Cravalho is told she is Disney’s newest princess, Moana.

It’s a moment that sort of places a lump in the back of your throat. The joy, the gratitude.

The first person Auli’i shared the news with was her mother.

Her mother, sitting next to her, filled with pride and love cuts in.

“No. You couldn’t We were sworn to secrecy.” 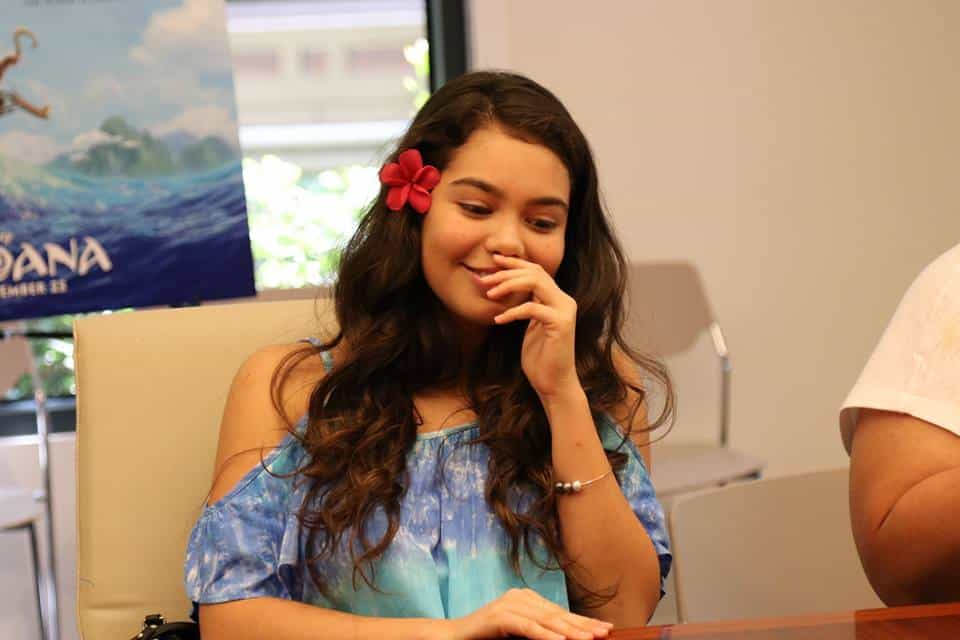 Her mother seems to carry the burden for her daughter, “She’d come home at night and we’d be hugging and she’s like, ‘Mommy. I’m Moana.'” Her laugh seems to place all the stars of the universe into her eyes. She continues, “Yes. You sure are, Sweetie.”

And then, the reality of this mother-daughter relationship is explained in one amazing sentence. “The truth is I told my mom. We would literally have these conversations at night about how there was no one that I could tell. There was one one else that I felt like I had to tell. It’s just been my mom and I for like three years or so. I love being able to not have to feel like I have to share the whole everything with the world, which is why I’m not very good at the Snap Chat, and I need help with my social media. Because I…I kind of just like having just us.” 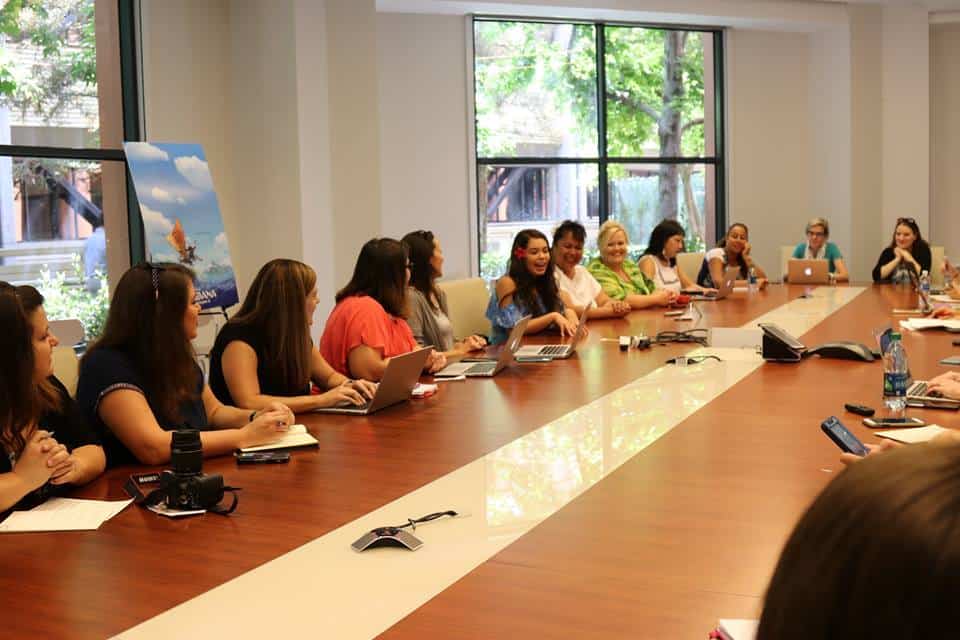 So Auli’i has been in the studio, doing the voice of Moana. She has not met any of the other characters. “Just the day before yesterday, I met Dwayne and then a few weeks ago, I met Rachel House who is the voice of Gramma Tala. It was interesting because I’ve gotten so used to the voices, but to see their faces with it and to match the personality. For instance, the person who plays Gramma Tala, Rachel House, that isn’t her actual voice. She totally commits to the character, otherwise she’s just a really sweet, kind woman who doesn’t sound like Gramma Tala.

Auli’i Cravalho and her mother Puanani are Hawai’ian.

Moana is a Polynesian Princess. 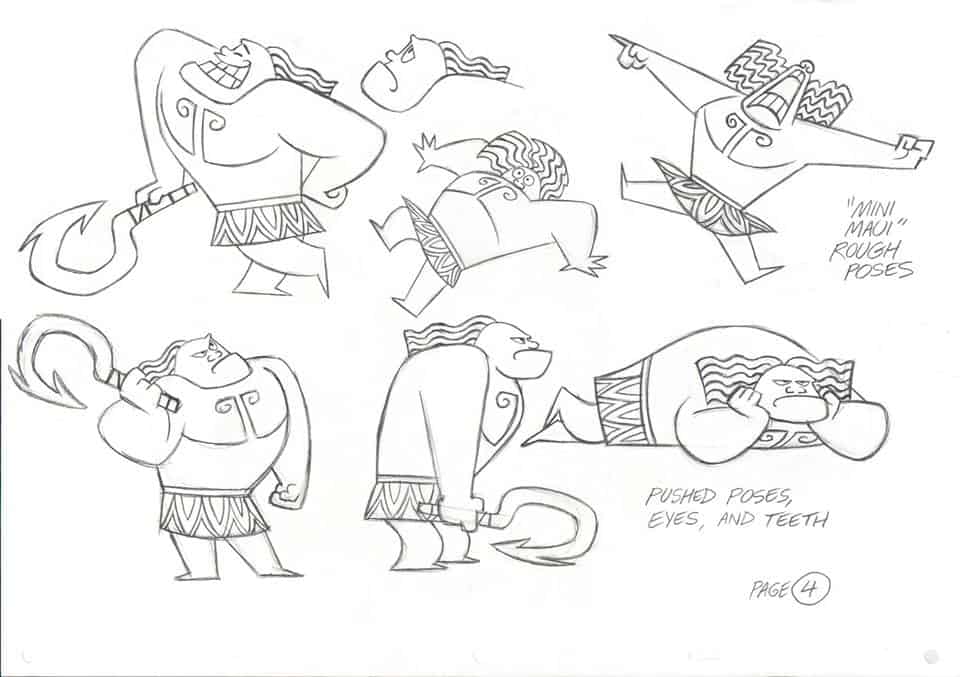 Dwayne “The Rock” Johnson, is Polynesian and he plays Maui, a demigod with a body full of tattoos that act sort of as his conscience.

So what’s it like when you meet “The Rock”?

Puanani wastes absolutely no time is telling us, “I did some “Rock” climbing for all of us. I’m just saying, you know, I took one for the team, sweat and everything.” 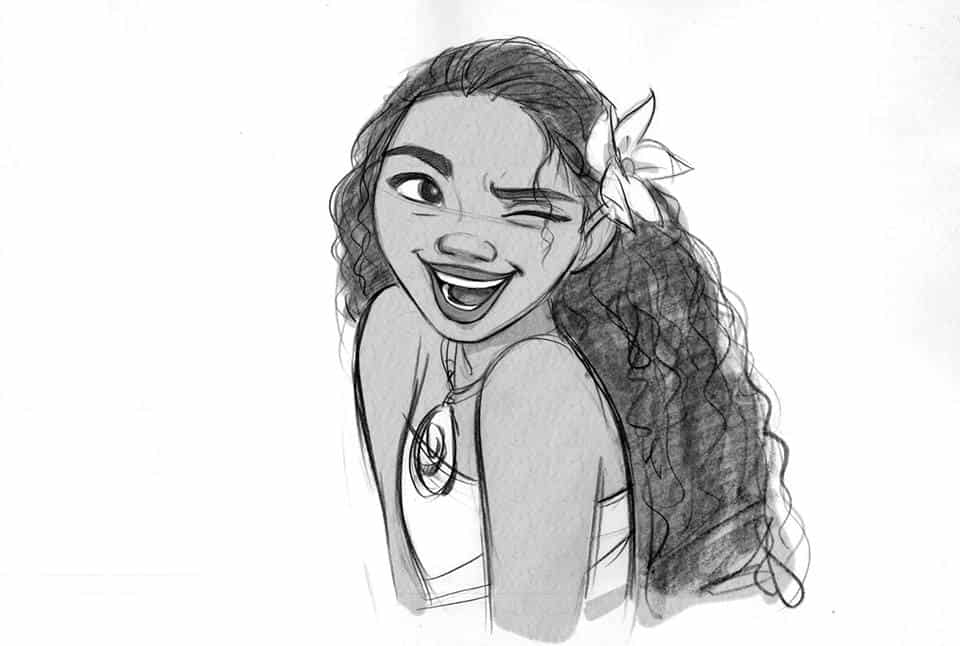 Auli’i takes the more professional approach, “He was very nice. Very professional. This whole process of recording without meeting someone was something that I was not prepared to do. I assumed we would be in the same booth. Dwayne is very focused, which is interesting because he has so many different jobs just throughout the day that while we were on the content shoot, he was of course, talking to other people, trying to work out flights and a lot of other stuff. It brought to mind how dedicated he can be to one thing and then convert his attention to another.”

My first trip to Hawaii was September 10th, 2001. The next morning was 9-1-1. My two-day trip, turned into 16 days on an island. I learned there are amazing people. Proud people of their culture, their traditions, their heritage. I hadn’t given it too much thought since landing back on the mainland, but in this room, Auli’i reminded me.

“Dwayne loves the character Maui so much.He is Polynesian just like I am. To see that he is so committed to the character just made it almost overwhelming. Just the amount of emotion that I know I put into my character, I know that he puts in the same amount.”

And then we learn more about what it means to be Hawaiian. To be the next Disney Princess. 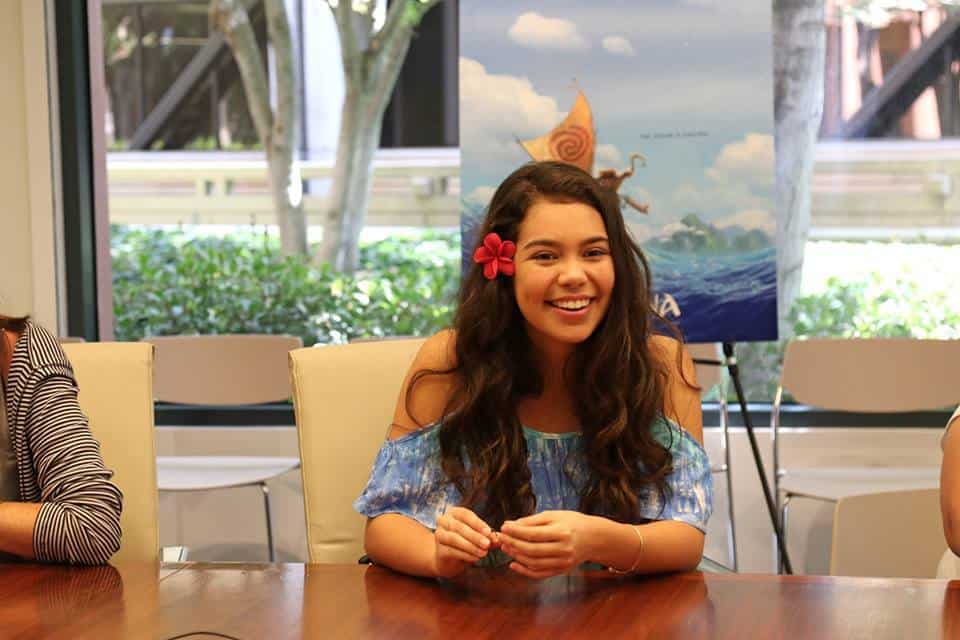 ““Moana is definitely a Disney character which is something that I totally love. She’s totally bad butt, really awesome. I think she really embodies it because i, as someone who has grown up, been born and raised on the island of Hawaii, so the Big Island, I love my culture. I go to an all Hawaiian school where you have to be Hawaiian to be admitted. I speak the language as well.”

“To have such a beautiful young teen, who shows that it’s okay to go on a journey to find yourself, it’s wonderful, because that message is universal to everyone.”

“Also wayfinding isn’t something they made up for animation purposes. It was truly almost lost in the Polynesian culture, which is something that not a lot of people know. The fact that it’s being shine in such a positive light and the fact that there is now a resurgence of navigation and wayfinding in real day-to-day life, it’s so important.”

Auli’i says she shares with Moana the love of family. She loves her people.

“I think when you go to Hawaii you’ll notice the ambience and you’ll notice everyone is friendly because we all kind of think for each other. That’s something that I had to get use to here (on the mainland), because it’s not like that. I don’t mean that in a negative way, but I’m not sure it can be taken any other way. It’s interesting. Everyone is for themselves here, which is great. If you succeed. Good for you. But for everyone that I’ve ever met in Hawaii, it’s like you made it and you made it for us. I just feel so proud of that. I think when everyone found out I was Moana, we got banana bread practically every night of the week. Aside from that, it’s been really normal!”

I looked at Auli’i, a girl the same age as my daughter. A girl living an amazing fairy tale, who owns the title of “Disney Princess” with such power and grace, and as I sit in awe listening to how well-balanced, well-spoken and positive she is, she ups the ante with, “I would love to pursue this but at the same time, I’m super glad that I know of thought of the future and what might or may not happen. I study no matter what. As of now, I love this so much, but at the same time I started pursuing, or started looking into either a law career or I’m really into science, like cellular molecular biology.”

Puanani brings the reality of what every mother feels, “This is an amazing journey. We’re with Disney; we’re in good hands, but this is outside of my knowledge. I’m doing my mommy part and I’m staying close with her, because I need to on this journey with her. Auli’i is happy and she’s thriving. This canoe is sailing and we’re sailing well. We really are. 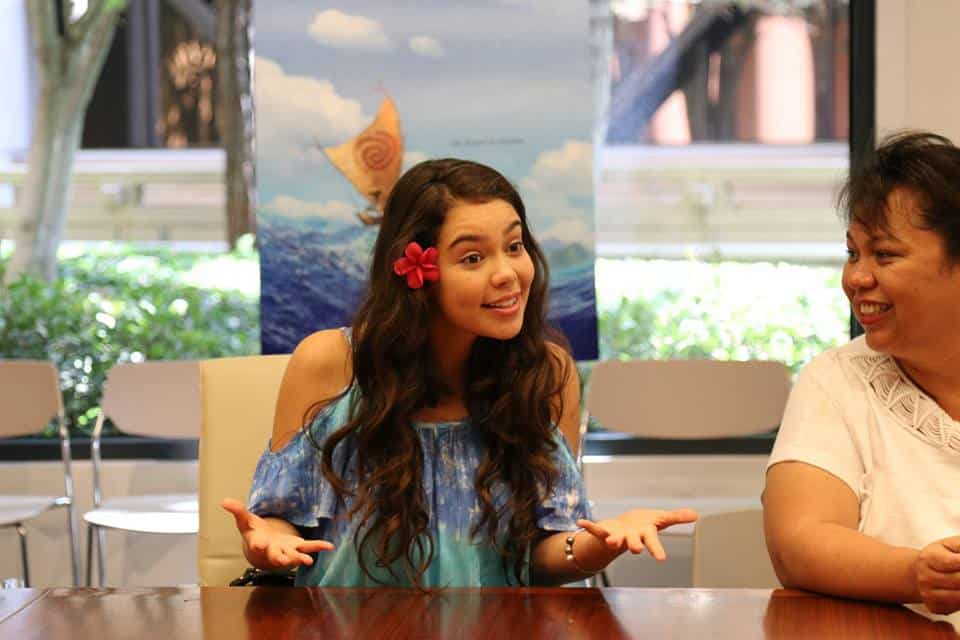 And the interview ends with Disney’s princess saying, perhaps for the first time, “I have a really amazing Mom; right?!” 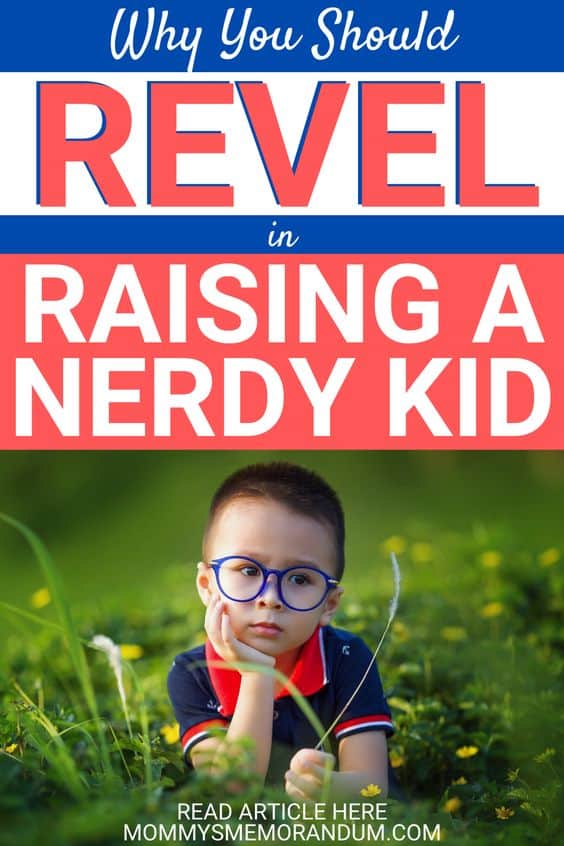 Raising A Nerdy Kid? Revel In It!
← Read Last Post 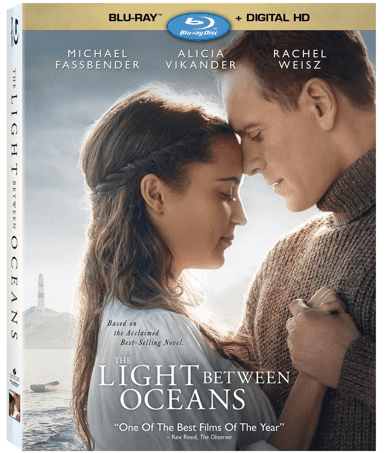 The Light Between Oceans Arrives on Blu-Ray January 24, 2017
Read Next Post →