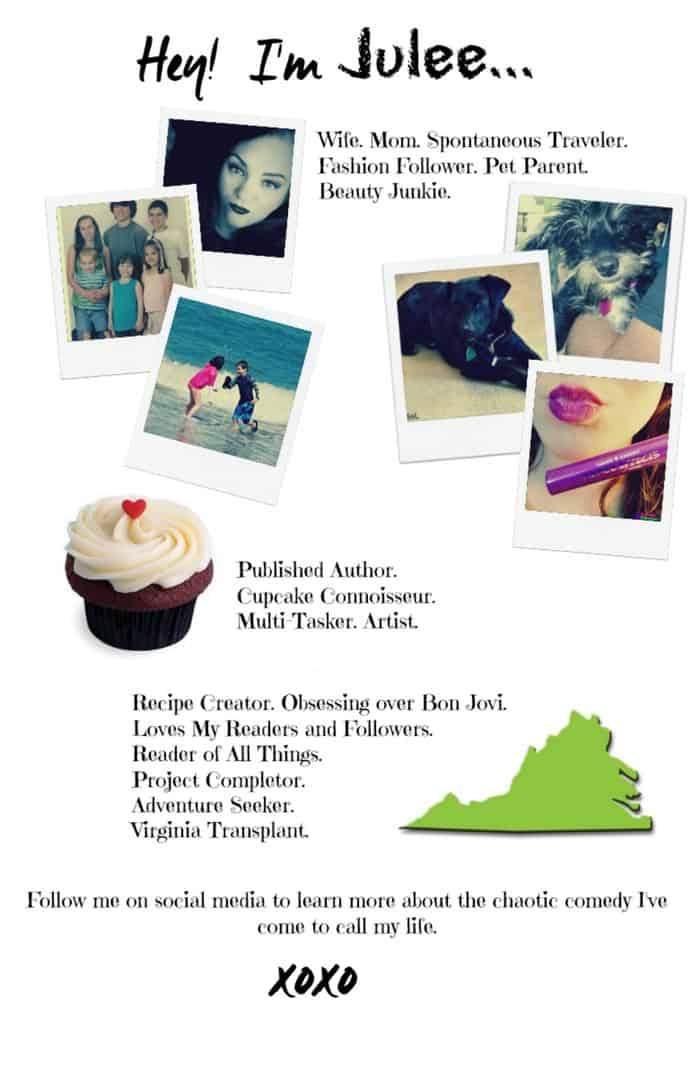 Julee has been blogging since May of 2008. It started when her then teenagers were talking widgets and one afternoon she set out to know more. By evening, Julee had discovered blogging was an outlet for her passion–writing, and the rest are recorded through the posts of Mommy’s Memorandum.

Julee or her writing has appeared in The LA Times (Bon Jovi Obsession Goes Global) Disney’s Family Fun Magazine (August 2010, July 2009, September 2008) My Family Gave Up Television (page 92, Disney Family Fun August 2010),My Great Idea landed in Disney’s Family Fun (Page 80, September 2008) Write for Charity book  From the Heart (May 2010). , see my author bio. Weight Watchers Magazine,  All You Magazine (Jan. 2011, February 2011, June 2013), End the Dinner Dilemma and Engage Your Family (Summer 2013 Issue), All You Magazine as Forgiveness Healed Me, “Snow Airbrushing” (January 2011, Page 51), Making Homework a Priority, Scholastic Parent and Child Magazine (Oct. 2011), Red River Family Magazine (Jan. 2011), BonAppetit.com, Parents Involvement Accountability or just unfair?  She Knows, Why teach kids some old-fashioned, decorum? She Knows, my toddler Stood on Elvis’ Grave and Scaled Over Boulders to Get to a Dinosaur and it made AP News, The Sly Way I Cured My Child’s Lying Habit and it landed on PopSugar. Heard On the Playground. Author, of the books: The Instant Pot College Cookbook, The How-To Cookbook for Teens, The Complete Cookbook for Teens.

The Website uses Mediavine to manage all third-party advertising on the Website. Mediavine serves content and advertisements when you visit the Website, which may use cookies. Mediavine may collect IP addresses and location to serve personalized ads.  If you would like more information about this practice and to know your choices to opt-in or opt-out of this data collection, please visit http://www.networkadvertising.org/managing/opt_out.asp.
Necessary Always Enabled
Necessary cookies are absolutely essential for the website to function properly. This category only includes cookies that ensures basic functionalities and security features of the website. These cookies do not store any personal information.
Non-necessary
Any cookies that may not be particularly necessary for the website to function and is used specifically to collect user personal data via analytics, ads, other embedded contents are termed as non-necessary cookies. It is mandatory to procure user consent prior to running these cookies on your website.
SAVE & ACCEPT
error: Content is protected !!