Is Stork or Butter Better for Cakes?

Home » Feature » Is Stork or Butter Better for Cakes?

If you’re new to the baking scene, you might be a stranger to the butter vs. Stork dilemma. Most traditionalists tend to favor Stork margarine over butter, while a lot of new-age bakers are butter loyalists through and through. Still, no matter which side you’re on, it’s critical to know when to choose which ingredient and why. After all, neither butter nor Stork is best for all cakes.

If the butter is the ingredient of choice in your particular baking scenario, feel free to check out some of these great options from Bread and Buzz. However, if you aren’t even close to making a decision regarding the matter, let us enlighten you further.

Today, we’ll be giving you a brief history lesson on Stork and what’s made it butter’s number one competitor in the cake baking department. We’ll also be discussing an alternative ingredient that can work as well as or even better than Stork and butter for baking moist cakes. 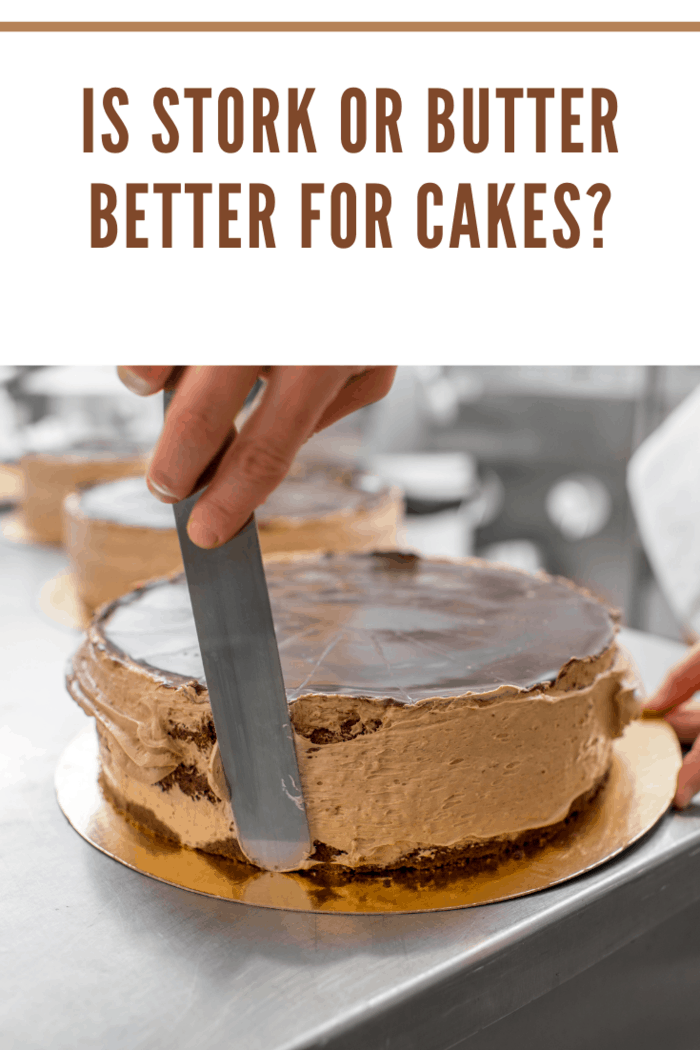 Stork is a brand of margarine that has been gracing kitchens since the beginning of time. Well, maybe not quite that long, but definitely long enough for most traditional bakers to be hesitant about replacing it. Arguments have been going around about this classic ingredient being better than butter for baking, but how true are they?

Where the Stork vs. butter squabble is concerned, many British homeowners will certainly be on Stork’s defense. They grew up eating pastries baked with this type of margarine, which generally retails close to half the price of butter.

The general reasoning is that butter triumphs over Stork taste-wise, but it doesn’t have Stork’s ability to moisten. When baking a sponge cake, for example, it is said that you would have a better chance of maintaining a soft texture and level rise using Stork margarine.

The Battle of the Fats

In the context of sponge cake baking, when you pit butter, Stork, and dairy-free spread against each other, you’ll likely get the following results.

This actually isn’t surprising, given that dairy is something sponge recipes rely on. What you’ll get with the dairy-free spread is a light-colored cake that’s relatively tasty and has a light, fluffy texture to it.

While falling within the range of “acceptable,” the dairy-free sponge cake still doesn’t come close to its butter-made counterpart (though it comes pretty close to the Stork-made sponge cake). That might have a lot to do with its duller flavor and artificial aftertaste, both of which are especially apparent when you’ve had a taste of the butter sponge.

Nevertheless, when done correctly, a sponge cake created with dairy-free spread isn’t considered a failure by any means. In fact, all things considered, its light color and texture still make it a perfectly good dessert.

Sponge cake made with Stork margarine isn’t actually that much better than a dairy-free sponge. In fact, assuming that both were baked under ideal conditions, a Stork sponge cake would probably only rate one or two points higher than the dairy-free version in a 1-10 rating scale.

Still, the improvement in texture, consistency, and color is noticeable. Aside from being more appealing to the eyes, a Stork sponge cake is also tastier and creamier than the dairy-free alternative.

Of course, it’s not without its downsides, especially in comparison to the butter sponge cake. You’ll notice immediately that it won’t be as creamy and has a little bit of dry texture. However, its top will be the softest, and it’s bound to stay fresher for longer than the other two.

As they say, “everything tastes better with butter.” It really isn’t a surprise that butter wins this battle convincingly. Of the contenders, butter is also considered the most natural fat, so it might not matter to you that it can also be the most difficult to soften (although these hacks should help with that considerably).

Butter can help you nail that ideal sponge cake look from color to texture, achieving just the right darkness with the perfect crusting on top. If you’ve been a long-time sponge cake fan, you’ll definitely notice that this version is more of an ode to the classic sponge cake than the other two. It just has sweetness, creaminess, and crispness all going for it.

Though, a slight drawback to the butter-made sponge cake is its heaviness. It can literally make some people feel full with just a few bites. This is not a good thing if you’re looking to savor more of the experience but excellent if you’re on a diet.

While many love cake, not all are looking to finish an entire layer in a single day. If you’re planning to keep the rest of your cake for a few days, or even a week, it would be a good idea to use oil when baking it. Oil is the magic that keeps your cakes from drying out.

If oil is your baking fat of choice, consider adding it to a couple of eggs and sugar that have been whipped together. When you do it this way using really good-quality oil, you can get some of your cakes to stay fresh for up to an entire week. Of course, this will also depend on the cake since cheaper oils might work well enough for certain recipes.

One good vegan option is coconut oil, but it does have the ability to mess the flavor up. Nevertheless, if you don’t mind its strong taste, feel free to add it to your list of ingredients.

Choosing the Best Fat for Your Cake

Ultimately, choosing the best fat for your cake recipe comes down to taste and personal preferences. While most will favor butter over Stork and other fat alternatives due to its superior texture and flavor, others might have some reservations about using it for their particular baking scenario because of its drawbacks.

On the other hand, most of these other options are perfectly capable of creating mouthwatering cakes in certain scenarios. Baking is a journey that comes with its fair share of trials and errors. Although you can always learn from the experiences of experts, it’s your own experiences and experimentations that help you grow the most.