If you’re getting snow, your bowl should be outside collecting it! Collecting it to make snow ice cream or snow cream.

Snow fast-moving system, so we have to collect snow while we can.

I’ve had requests for my homemade snow ice cream–it’s similar to homemade ice cream, but it’s the sweet treat made with snow.

It is an easy recipe.

Add it to your winter bucket list and start a family tradition.

It’s a fun winter activity that will create fond memories.

Get ready for the best snow ice cream recipe!

Remember you can make flavors like chocolate with hot chocolate packets or instant pudding mix.

The pudding mix opens you up to a variety of flavors.

The recipe is not exact.

You have to taste and adjust as you mix.

It is so easy; it’s all my kiddos want now.

Unfortunately, Winston-Salem doesn’t get much snow….or, that’s what they told me all summer.

It doesn’t snow much in North Carolina–sometimes there is the occasional snowflake and when that happens, it’s mayhem!

Here’s what day two of the blizzard looks like: 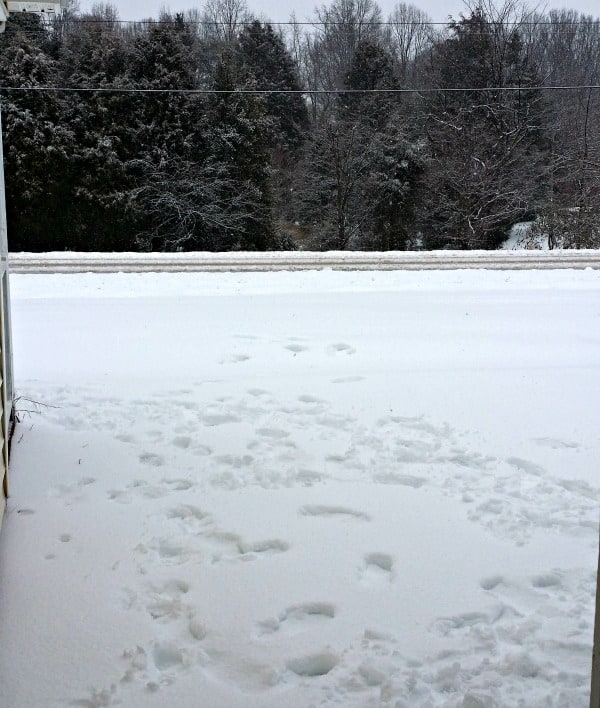 So now that we’ve cleared up that it really does snow in Winston-Salem, and I should not have given up those snow boots, we’ve settled in and are indulging in SNOW CREAM!

This recipe is so easy, and my kiddos will even go out foraging for the snow to make this delicious treat.

The only rule is “clean snow.”

AND you have to mix it fast–before the snow melts!

You can set a large mixing bowl out during the snow to collect the main ingredient. (cleanest snow option)

Trust me, parents, a big bowl of fresh snow is great, or eating the foraged snow at your own risk.

You can add various flavors, but we like the pure stuff best.

Any snow will do, but for the best results, you’ll want soft, freshly fallen snow.

You can indulge in snow cream too! 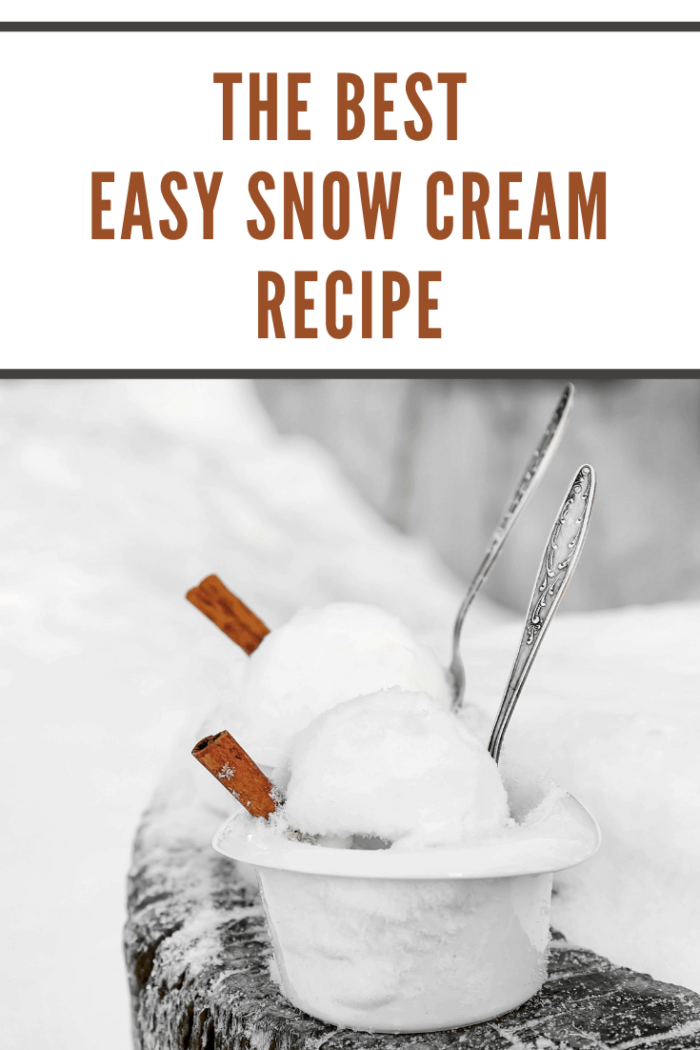 For those pondering this and wondering, Will Snow Ice Cream Kill You?

There are some risks when it comes to making ice cream out of snow. I mean, there’s more than just water in snow. With the snow that’s made it to the ground, anything that was on the ground could be included in the mix, including the salt and chemicals used to melt snow off the roads and sidewalks, according to AccuWeather.

An article on education site ThoughtCo warns of eating colored snow — be it yellow snow, brown snow, green snow, or anything else. It also warns of eating snow gathered from near roads because of the exhaust fumes from vehicles driving by.

Al Coombs at CJBK radio in London, Ontario discusses this.

Her recipe appears to be the first ice cream version of Snow Cream.

Earlier recipes using that title were the froth from whipping cream and egg whites.

She speaks of going out to the porch, collecting freshly fallen snow in a dishpan, and bringing it back in to be mixed with three beaten eggs, vanilla flavoring, and sugar, in her cookbook, You’re Cookin’ It Country.

This recipe is easier than that!

Things to Keep in Mind:

You don’t want to have to go scooping too close to the ground or surface (especially if you have dogs and lots of wildlife around your yard).

Set out a large bowl when you’re expecting a snowstorm to collect the snow as it falls.

You don’t need a lot of snow.

You can also set out two large sheet pans on your porch or deck. This works great when there isn’t much snow.

Adult option: swap half of the milk for Bailey’s Irish Cream and/or use Kahlúa in place of the vanilla extract.

Extra light option: use Splenda instead of real sugar. 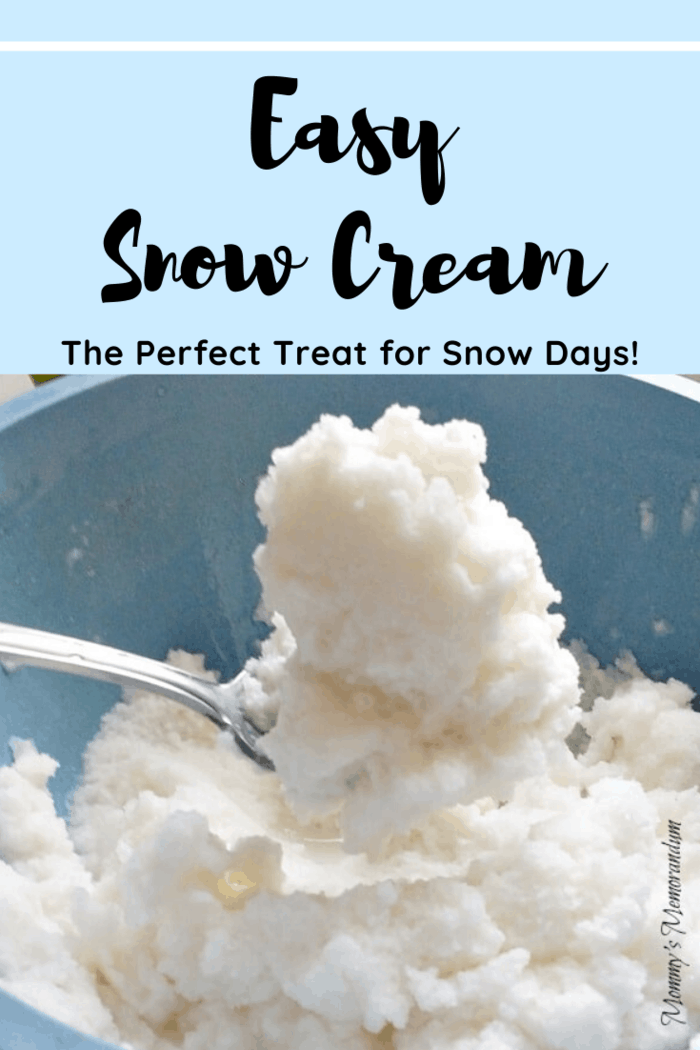 In a large bowl mix milk, vanilla extract, and sugar.

Stir until sugar is dissolved, about 3 minutes.

Stir in the snow, a cup at a time, until it reaches the preferred consistency

Don’t forget to use your favorite ice cream toppings. 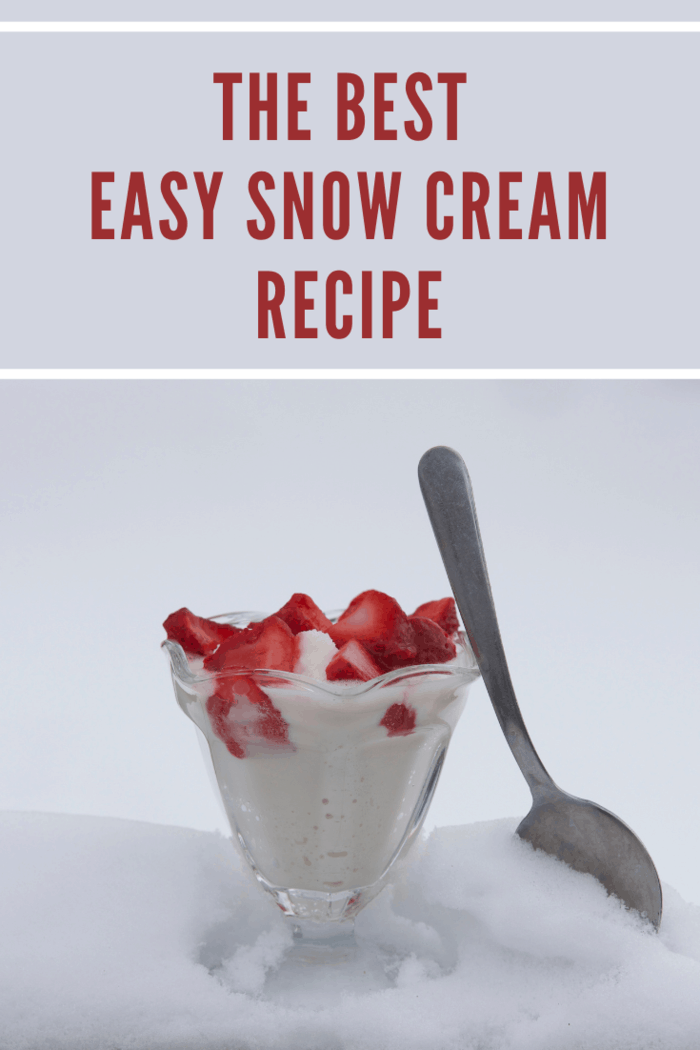 If you’re looking for a dairy-free Snow Cream Recipe 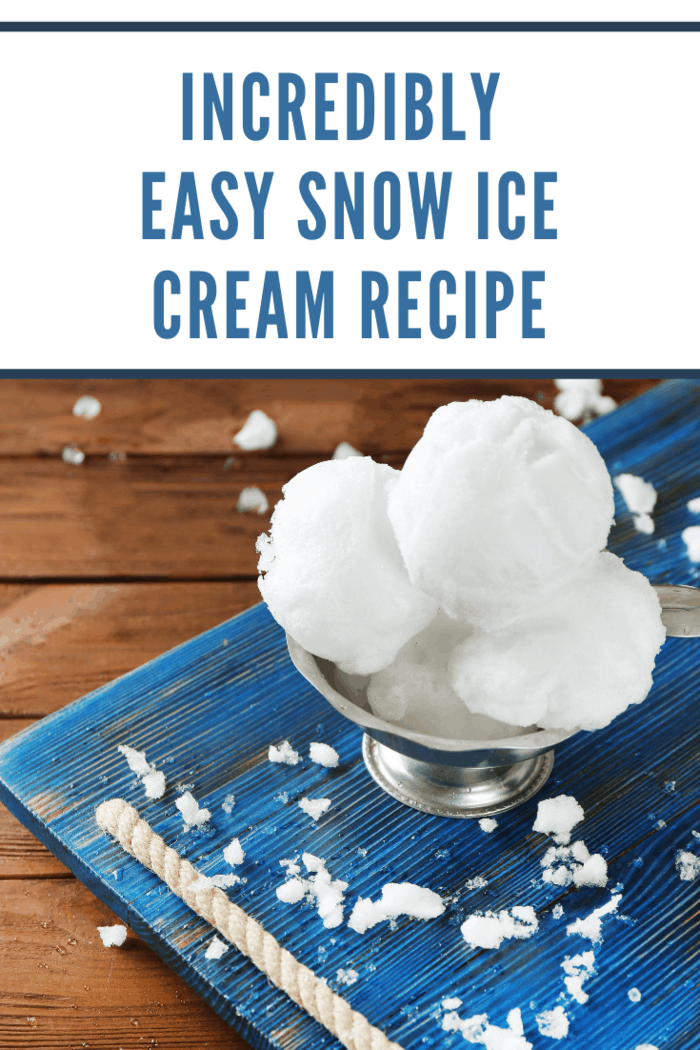 4 cups freshly fallen snow (it needs to be powdery consistency)

1 (14 ounces) can of sweetened condensed milk

Add another 4 cups of snow. 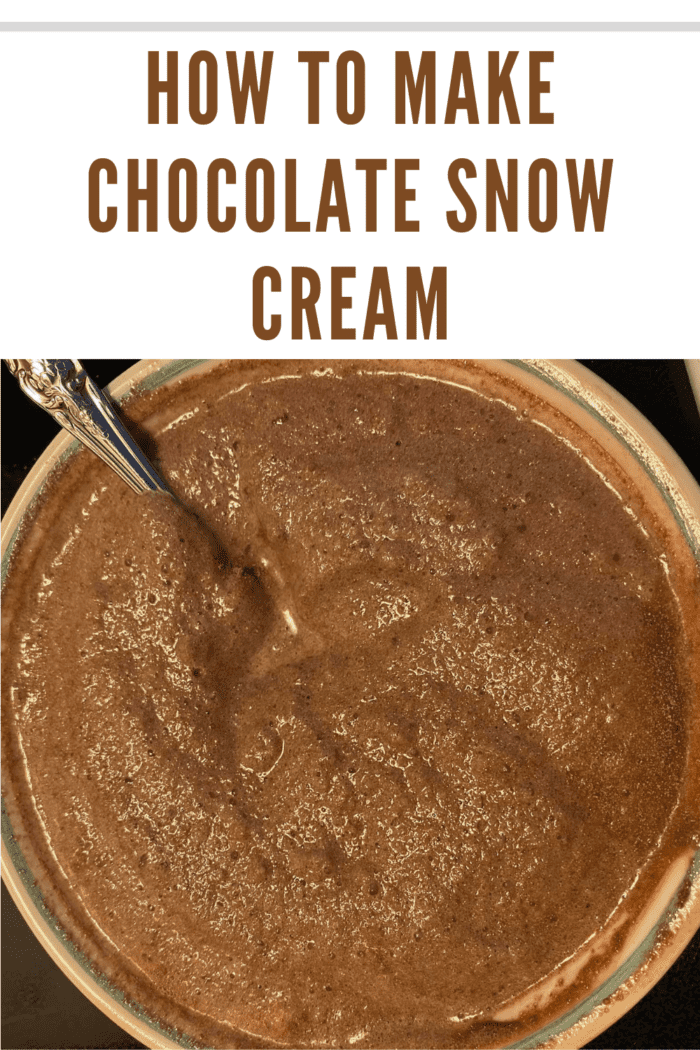 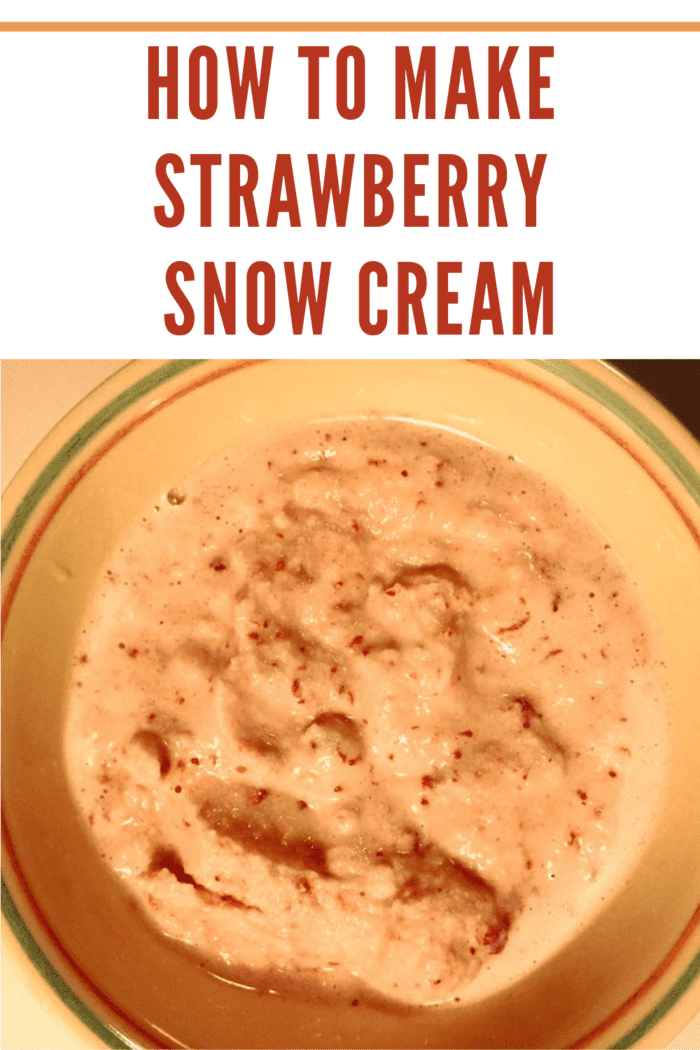 How to make Mocha Snow Cream

Add a drop or two of food coloring to brighten up dreary days.

Putting your bowl on a level surface will help collect the snow earlier. A metal bowl on a deck rail or outside table works well.

3-Flavors of snow cream can be made! Chocolate can be made by adding hot chocolate packets. Instant pudding packets can help you make many different flavors.

Snow cream must be eaten immediately.

It will lose its consistency if kept in the freezer. 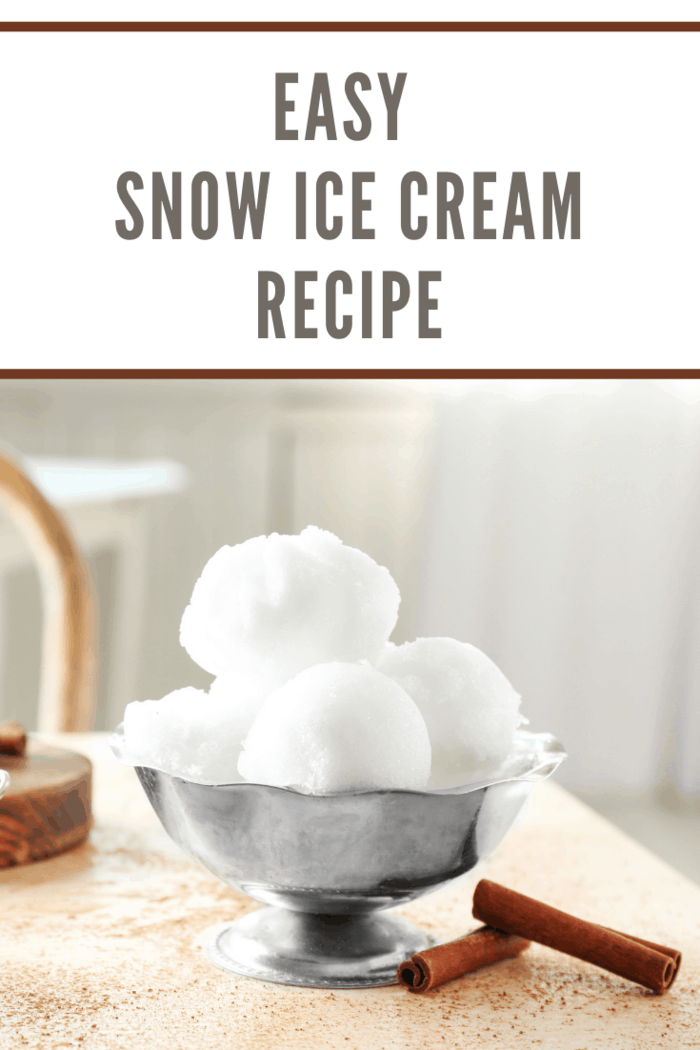 FRIENDLY REMINDER- I am willing to accept ALL DONATIONS of snow! Please do not complain about such a beautiful thing! If you have snow and don’t know how to enjoy it, I can gladly take it! We have just had the time of year when people like to donate to the needy. I am SNOW NEEDY! PLEASE help me get some snow since Mother Nature enjoys taunting me! Thank you in advance for your generous donations! 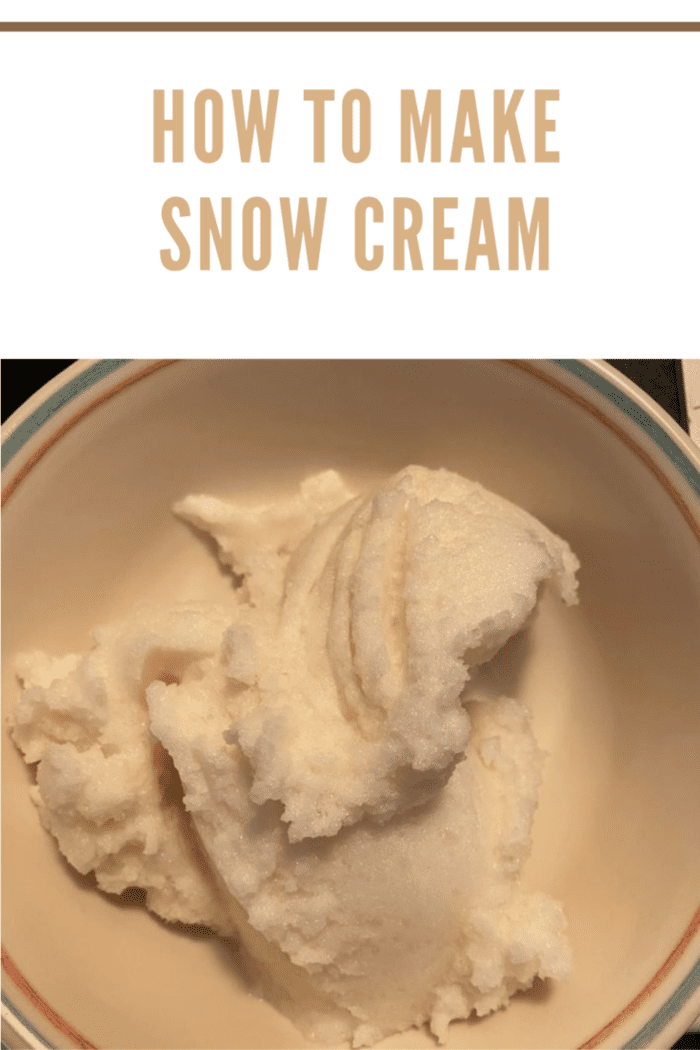 Looking for more ice cream recipes? You’ll love these too:

Nutritional Information may not be accurate

The Website uses Mediavine to manage all third-party advertising on the Website. Mediavine serves content and advertisements when you visit the Website, which may use cookies. Mediavine may collect IP addresses and location to serve personalized ads.  If you would like more information about this practice and to know your choices to opt-in or opt-out of this data collection, please visit http://www.networkadvertising.org/managing/opt_out.asp.
Necessary Always Enabled
Necessary cookies are absolutely essential for the website to function properly. This category only includes cookies that ensures basic functionalities and security features of the website. These cookies do not store any personal information.
Non-necessary
Any cookies that may not be particularly necessary for the website to function and is used specifically to collect user personal data via analytics, ads, other embedded contents are termed as non-necessary cookies. It is mandatory to procure user consent prior to running these cookies on your website.
SAVE & ACCEPT
Skip to Recipe
266 shares
error: Content is protected !!