This morning, I did something I seldom do. I woke up at 4 am. I was not alone, but one of 2 billion viewers. It was for no other reason than to watch the Royal Wedding where Prince William marries Catherine Middleton. They are college sweethearts who, through the years have had a turbulent relationship of break-ups. In the end, they saw it through and now carry the title of Duke and Duchess of Cambridge, as declared by Queen Elizabeth II.

In 1981 I watched Diana Spencer walk down a similar red carpet at  St Paul’s Cathedral, to marry her Prince, Charles. It was a fairy tale wedding in every aspect.

Today’s wedding was far less elaborate though none less beautiful.

I was disappointed when I turned on the TV only in time to see Kate in the entrance of West Minster Abbey, ready to take her walk as a commoner. I wanted to see the parade. I wanted to see her arrive in the Rolls Royce Limousine. I wanted to be a part of it all.

She stood there impeccably beautiful in her gown created by Sarah Burton, and Alexander McQueen. It’s style simplistic and portrayed Kate’s classic style. The details of the dress have been a well-kept secret. It is no more. We’ve seen the stunning ivory dress with its lace appliquéd bodice and skirt, handmade by the Royal School of Needlework, adorned with lace flowers on ivory silk tulle. It is traditional and symbolism of royalty with the rose of England, Scotland’s thistle, Wales daffodil and the shamrock of Ireland.

Then, on her father’s arm, she walked through the 1,900 strong congregations of guests to her prince, dressed in red military uniform. 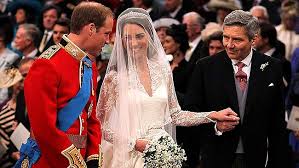 As the couple united at the altar, Prince William said to Kate, “It was to be an intimate family affair”, which brought a smile to the faces of his bride and her father. 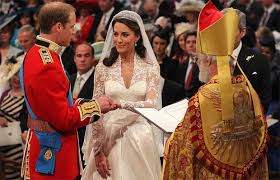 There was a small hiccup in the choreographed ceremony when Prince William gave his bride a gold ring made from a piece of gold from his Grandmother, Queen Elizabeth II after the announcement was announced. The ring was created by London-based jeweler, Wartski. The media had released previously that Prince William will not wear a ring.

The couple exited West Minster Abbey as husband and wife in the 1902 open landau carriage and were the guests of honor in the parade leading Buckingham Palace. The carriage is the same that was used by Prince William’s parents, Prince Charles and the late Lady Diana in their 1981 nuptials.

Then at 8:25am (MST), on the balcony of Buckingham Palace, with their family and before a cheering and chanting crowd, it was all sealed with a kiss.

It truly was a beautiful wedding and one that represents a common girl growing up to become a princess.

Here’s to their Happily Ever After!