Seventy-five miles south of San Francisco there’s a quintessential California beach town that stirs nostalgic memories of summer. Santa Cruz. A town with low-key charm, where there always seems to be sunshine and surf.

It’s the town where surfing in America started, back in 1833 when three Hawaiian Princes visiting the mainland had surfboards carved from local redwood and introduced surfing to the locals.

126 years later, a man, who would become the most famous local surfer of all time, Jack O’Neill, would move to Santa Cruz and change surfing forever. It’s the heart of what this ocean town is about–surfing.

O’Neill wasn’t always acquainted with the ocean. He was born in Denver, Colorado. As a small child, his family moved to Long Beach, California and his love affair with the ocean was born.

In the early 1950s, O’Neill married Marjorie Bennett and moved to Ocean Beach in San Francisco. Their newlywed years found O’Neill conducting experiments on the kitchen table with the goal to find something to protect the human body from the frigid ocean, so he could “surf longer.”

Jack O’Neill, surfer, ocean lover, and wetsuit pioneer, became the founder of the iconic worldwide surf company, O’Neill. From a garage in San Francisco “Surf Shop” was born, the business grew, and O’Neill moved shop to surf central Santa Cruz, a plaque now marks this historic spot, as part of the Dream Inn. 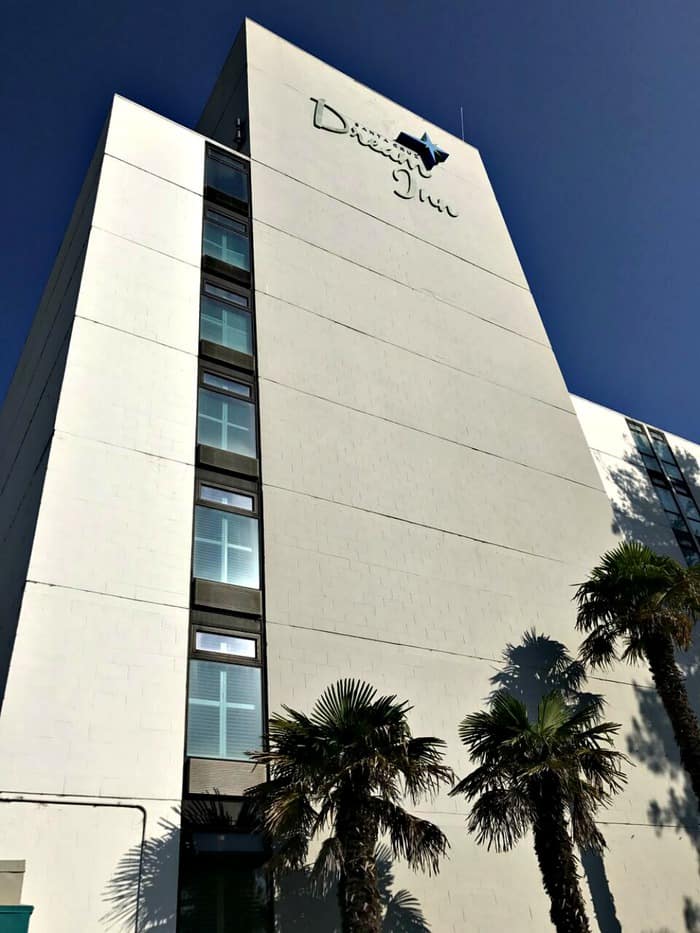 The Dream Inn has a central place in Santa Cruz, right in the middle of the action. It’s just a short walk to the beach town’s center.

The views from the rooms are breathtaking, highlighting the Monterey Bay. 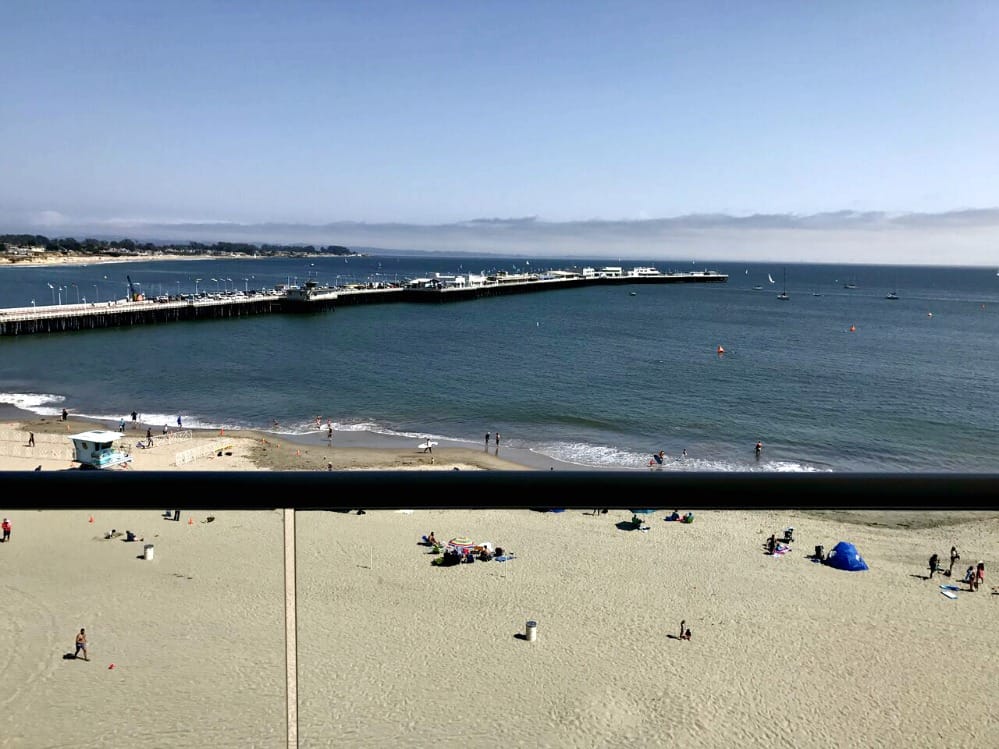 There are also views of the historic Santa Cruz Wharf, the longest wooden pier at one-half mile, in the United States. There are restaurants and shops along the wharf with a cacophony of sea lions at the end.

Walking into the lobby of the Dream Inn homage is paid to the Surf Co. founded by O’Neill, whose brand was established on this same spot. 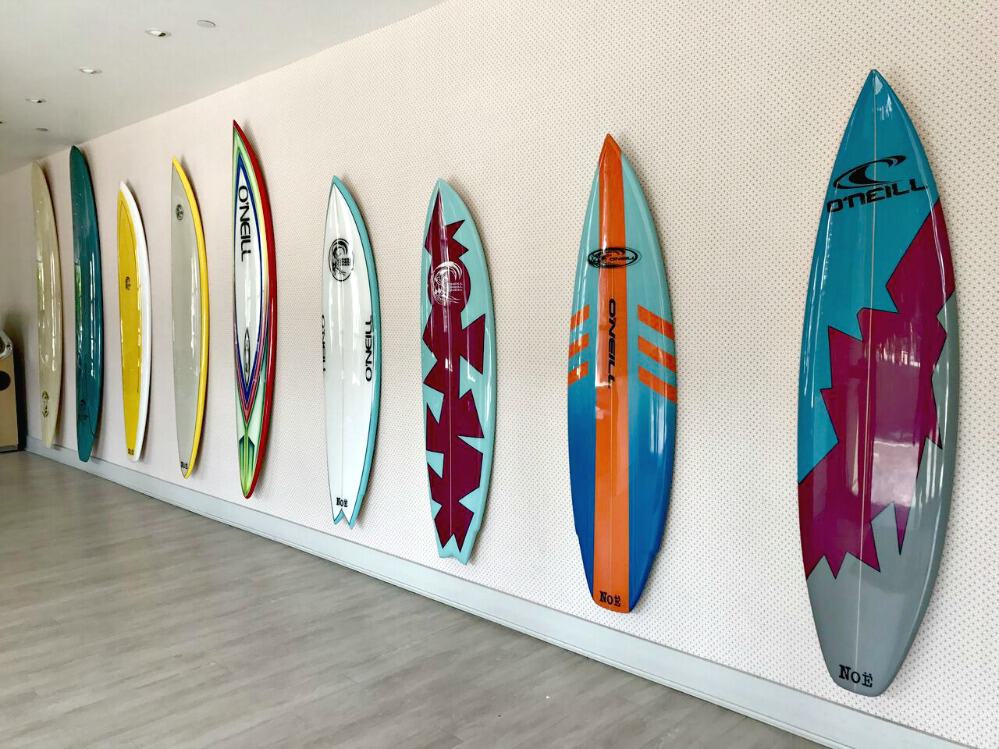 Even the name tags made from locally recycled surfboards pay tribute to the history where surfboards were made, the first surf movies from Bruce Brown were promoted, and wetsuits were produced for the growing population of Santa Cruz surfers and other surfers throughout California.

Borrow a retro beach cruiser from the Dream Inn and cruise along the boardwalk, one of the few remaining seaside amusement parks in the nation. During the summer months, free movies and music on the beach are available. Ride the Giant Dipper, a large wooden roller coaster that’s been in operation more than 90 years. 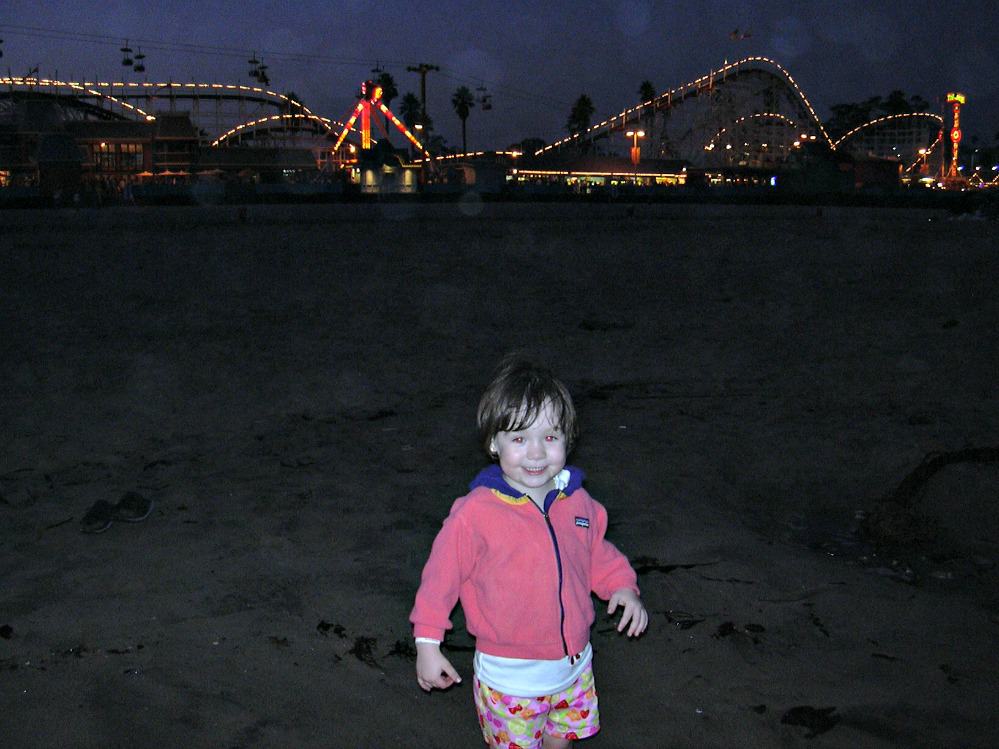 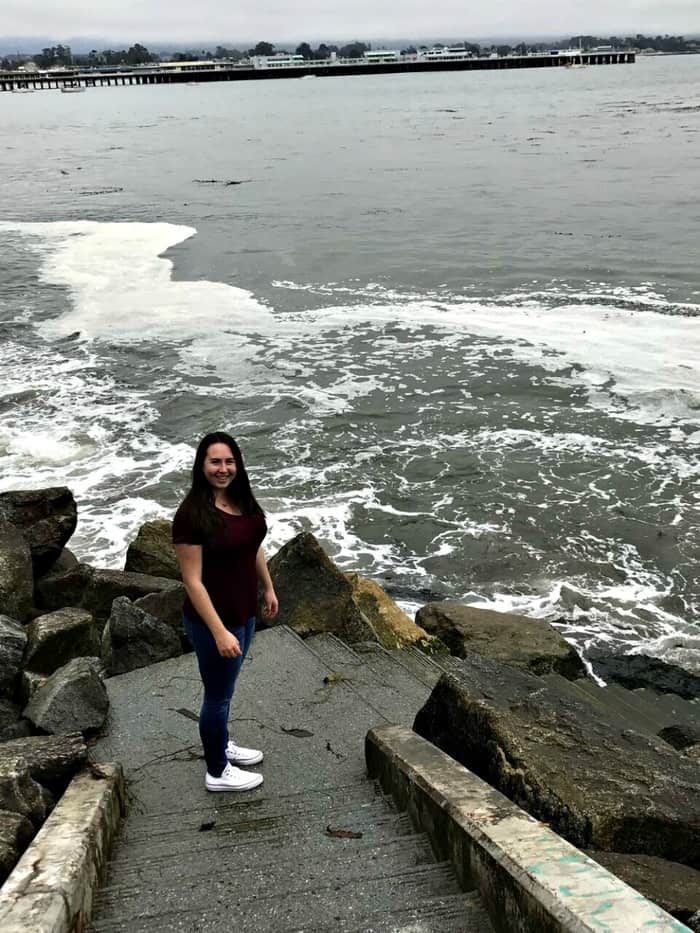 The famous expert surf spot between Point Santa Cruz and Cowell Beach is called Steamer Lane. It’s the surfing spot for experienced surfers. The shoreline is mostly cliffs and boulders. It’s a great place to watch the riders. 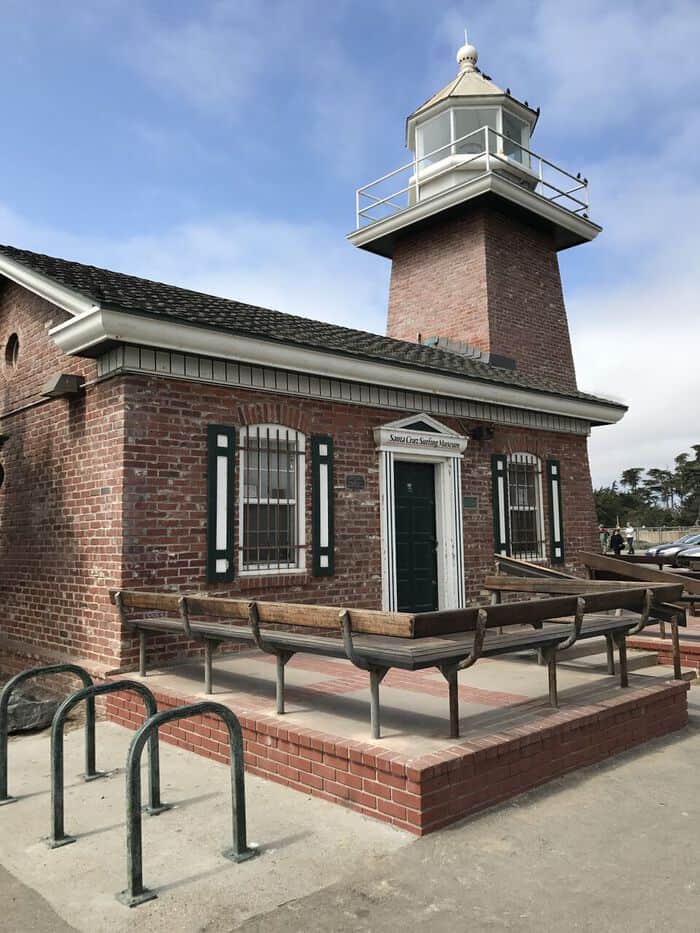 The Santa Cruz Surfing Museum, which chronicles more than 120-years of surfing and includes a shark chomped surfboard, is located inside the lighthouse in the park on the point.

The Surfer Statue, an iconic bronze statue by artist Paul Topp is a Santa Cruz Surfing Club member standing guard over the swelling waves of Steamer Lane “To Honor Surfing” a plaque reads. 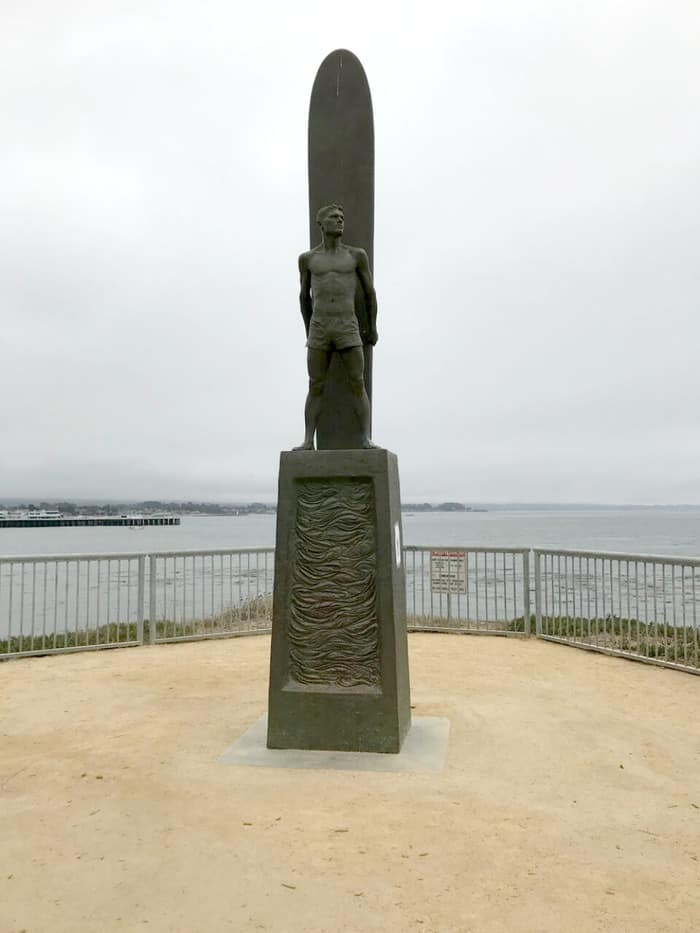 Follow the train tracks all the way to the harbor for a glimpse at Jack O’Neill’s 65-foot catamaran sailing the Monterey Bay, where 4th-6th-grade students throughout Central California learn about marine habitat and the importance of the relationship between the living sea and the environment as part of the O’Neill Sea Odyssey (OSO). 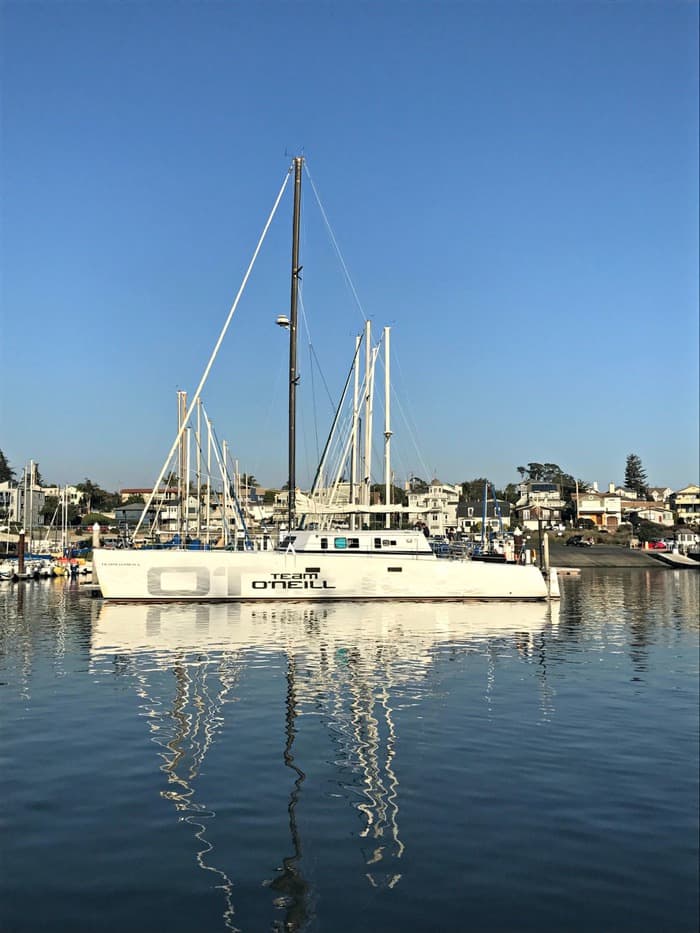 Trade the beach cruiser in and find the coffee cart pulled by a beach cruiser and grab yourself a cup of award-winning Verve, a Santa Cruz based coffee. 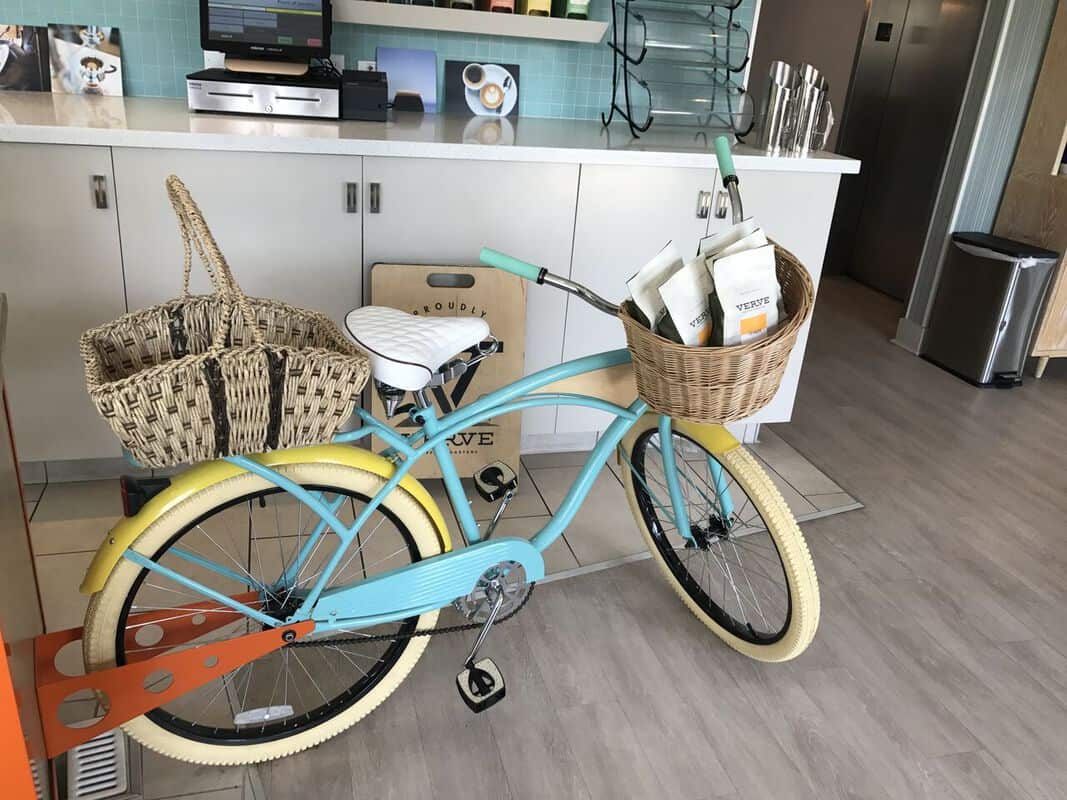 Enjoy Happy Hour or stroll through surfing memorabilia at the Jack O’Neill Lounge, the approximate site of the world’s most famous surf shop, located beach level within the Dream Inn. The view here is breathtaking and easy to take in with the floor to ceiling windows overlooking the beach.

It’s a place that makes you feel like home with cushy window seating stuffed with cushions, and the wonderful ambiance.

The walls showcase pictures and memorabilia of surfing. 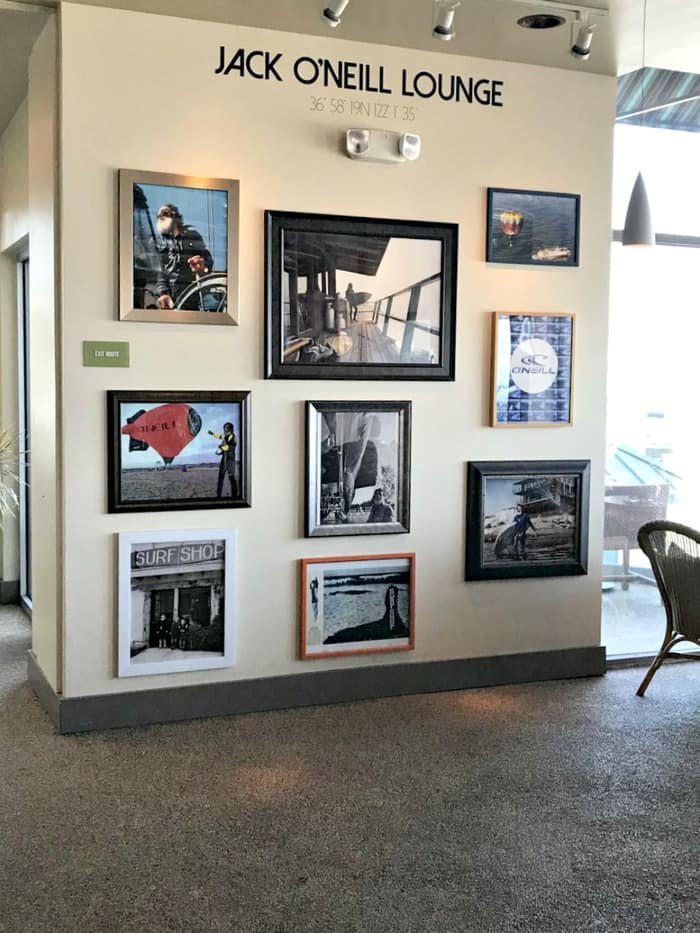 There’s a ceiling of surfboards with an O’Neill brand surfboard hanging above the bar. 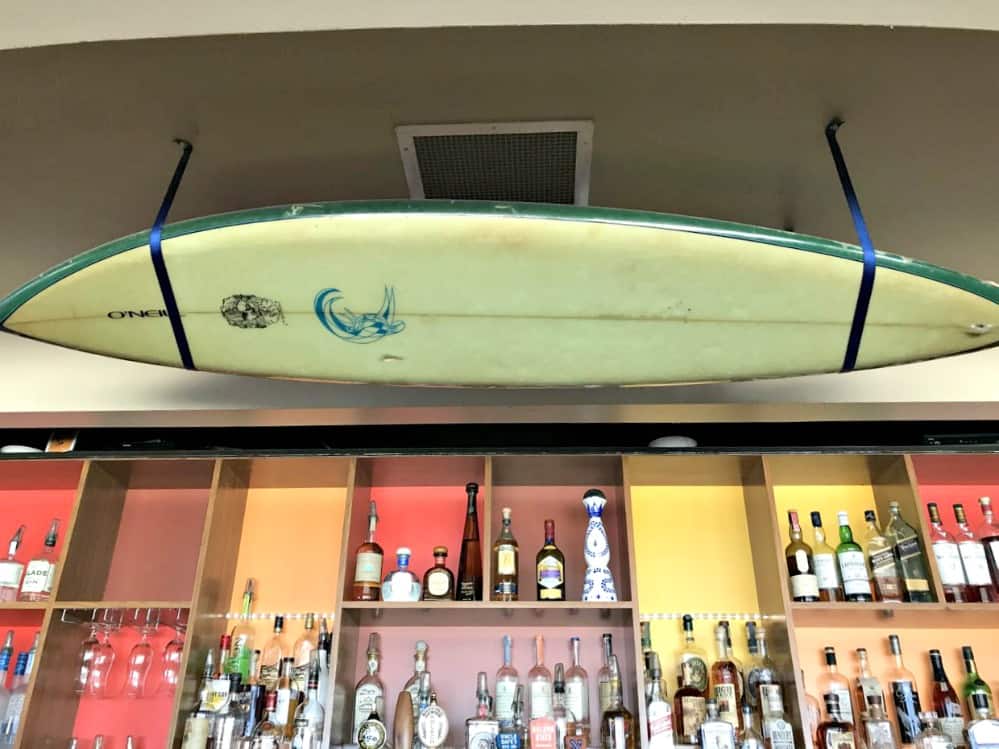 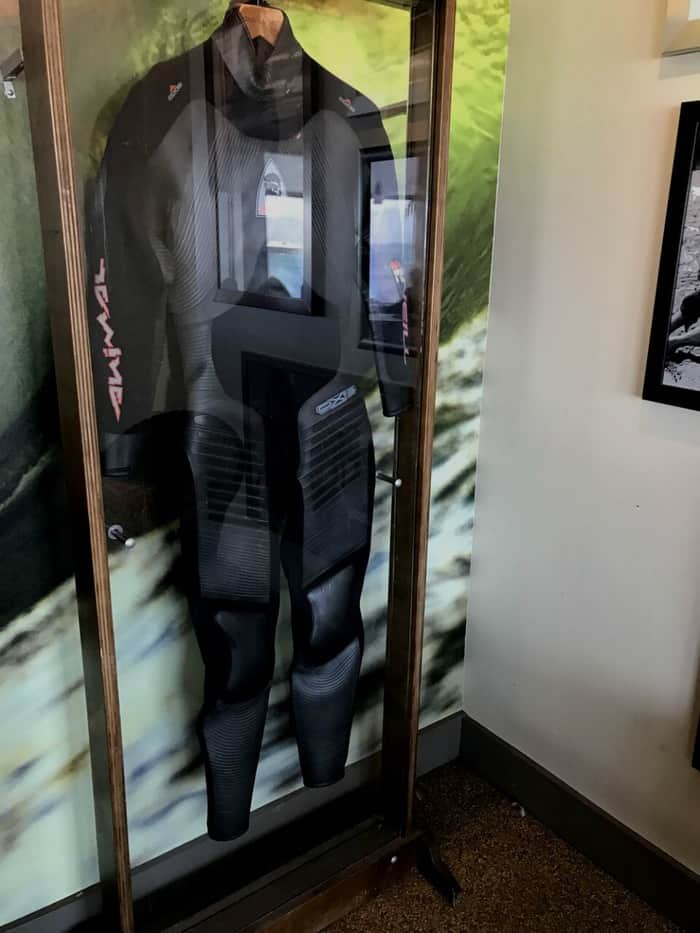 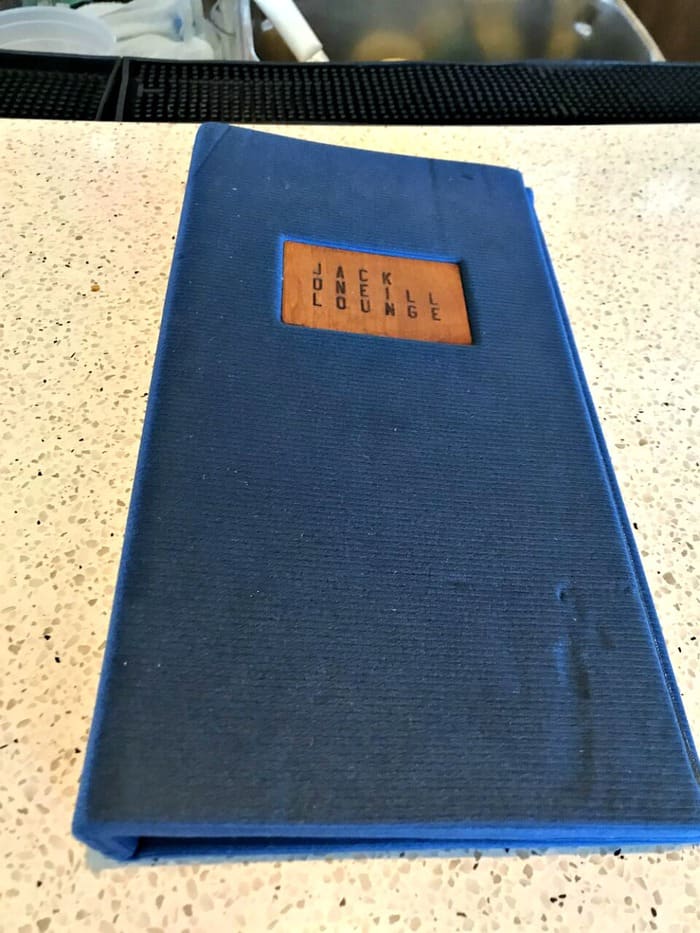 There is a gigantic headshot with a patch over the eye of Jack O’Neill that looks on while you sip.

The patch is a result of a surfboard hitting his eye while riding a wave. 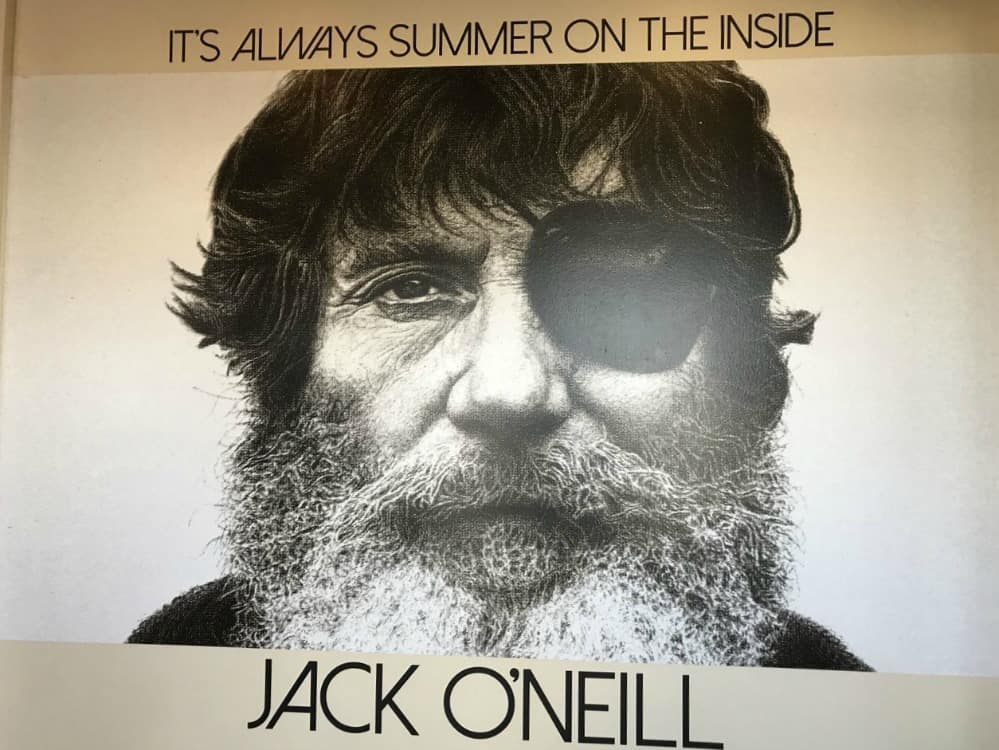 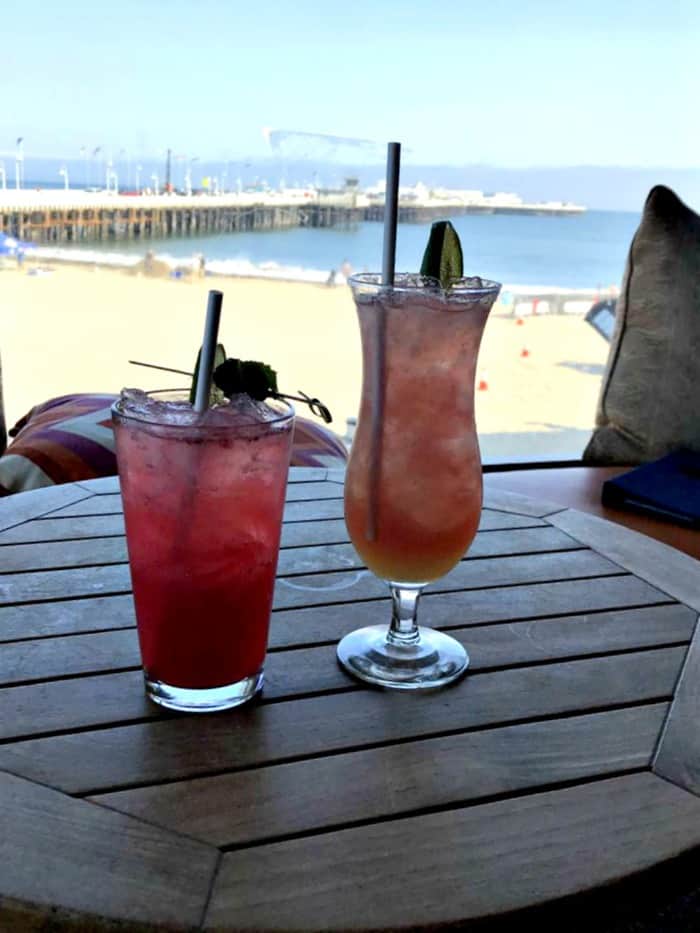 Freshen up and head to Aquarius, the luxurious beachfront restaurant, and Santa Cruz staple. It’s the perfect way to taste what Santa Cruz has to offer.

Aquarius showcases the bounty of California’s Central Coast with seafood from the Monterey Bay, meat and produce from small, local organic farms and local wine and craft beers. 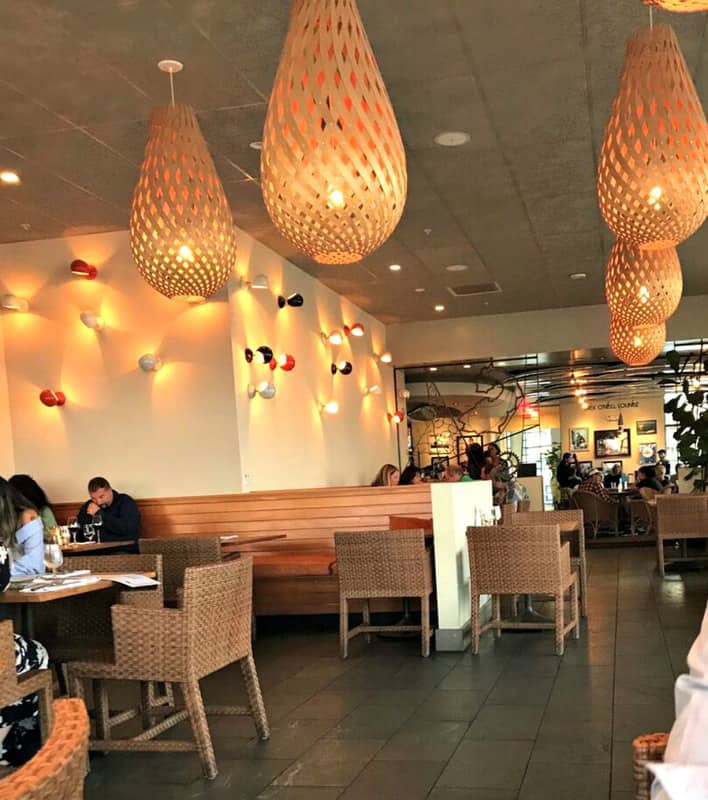 Aquarius is right on the beach with incomparable views of the Monterey Bay. 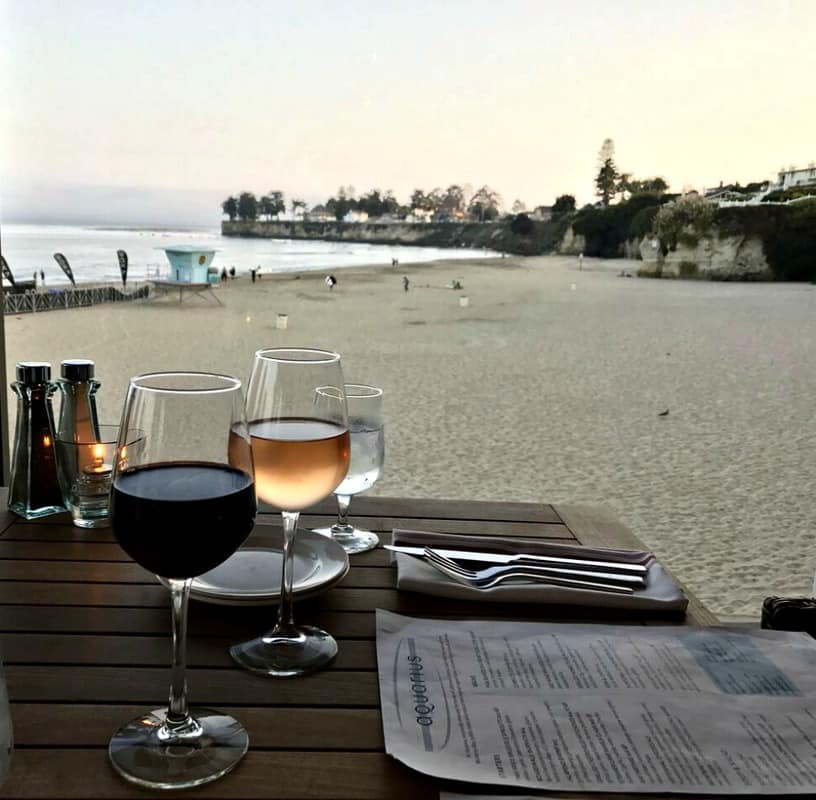 There’s plenty of options on the Aquarius Menu.


We recommend starting with the Jalapeno Shrimp Appetizer. It’ll be gone before you can snap a picture. 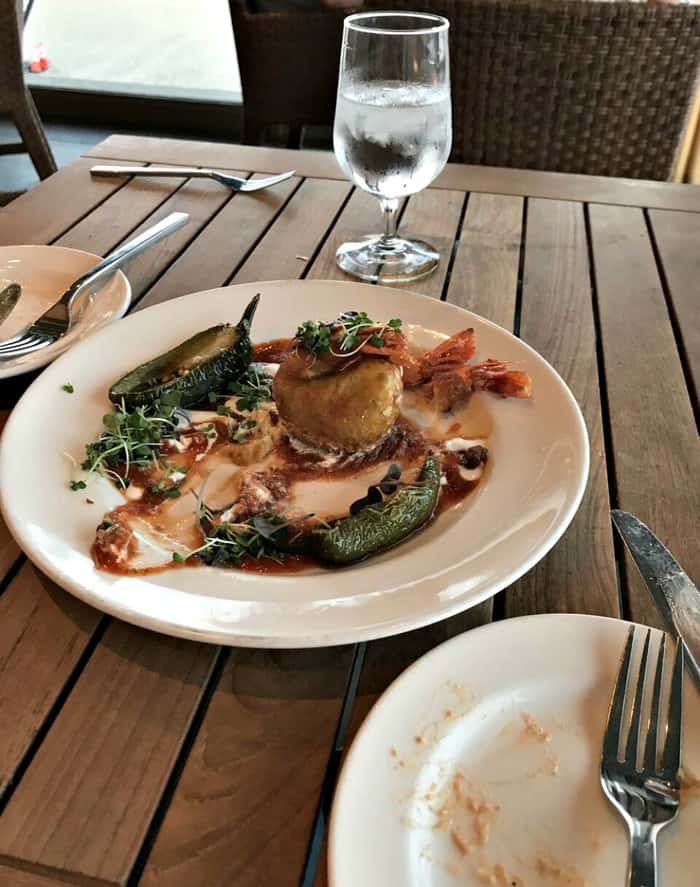 Follow the appetizer with the Grilled New York Steak, with mashed potatoes and seasonal vegetables. 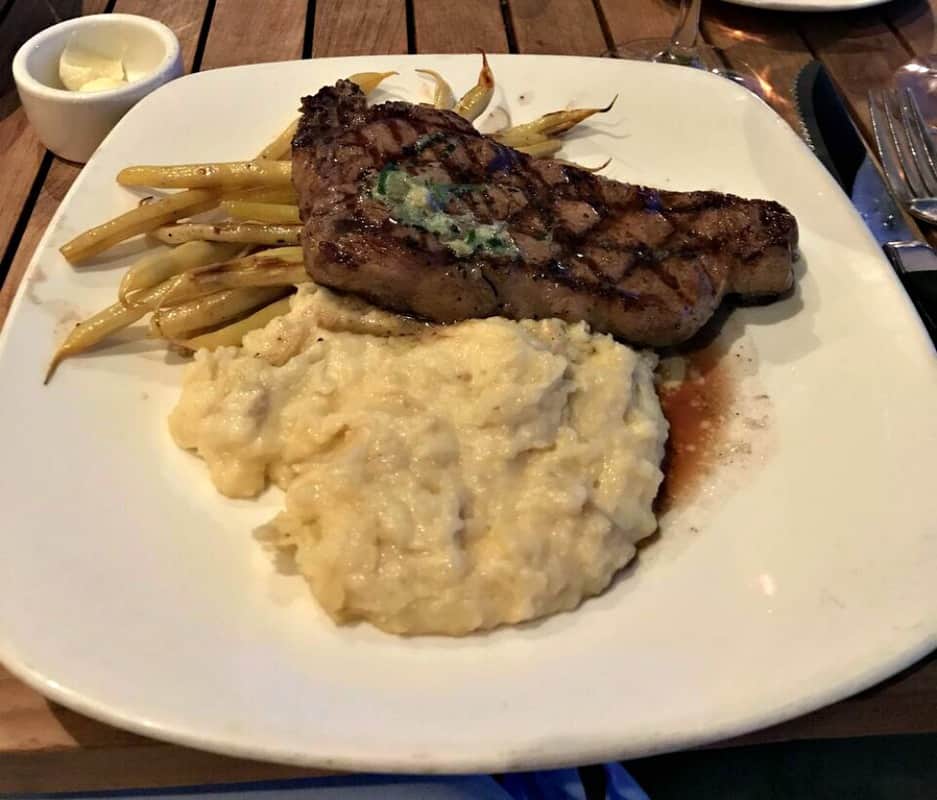 Another excellent choice is the Grilled Halibut with castroville artichoke salsa, braised greens and burgundy fumé. 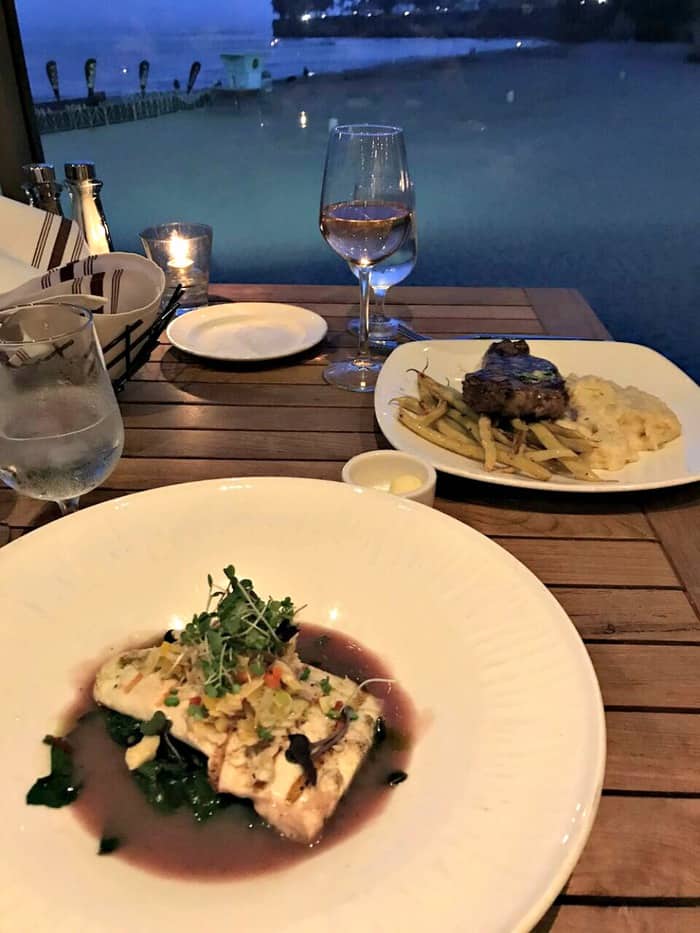 Take in the view, watch the water as the current emanates from the North, feast on the entrees created by Aquarius executive chef Kenneth Drew.

Enjoy the sunset on the beach, and celebrate the day with dessert! 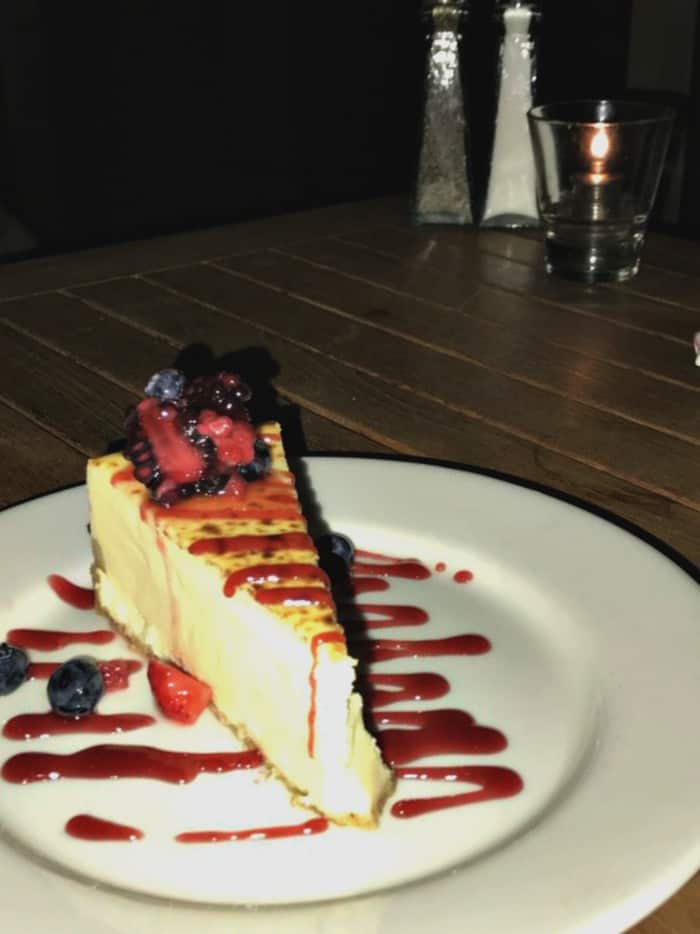 Celebrate the life of the legendary Jack O’Neill, the world’s largest recreation wetsuit designer, and manufacturer who introduced the surf craze worldwide. Be part of his Santa Cruz and stay where it all started, at the Dream Inn. 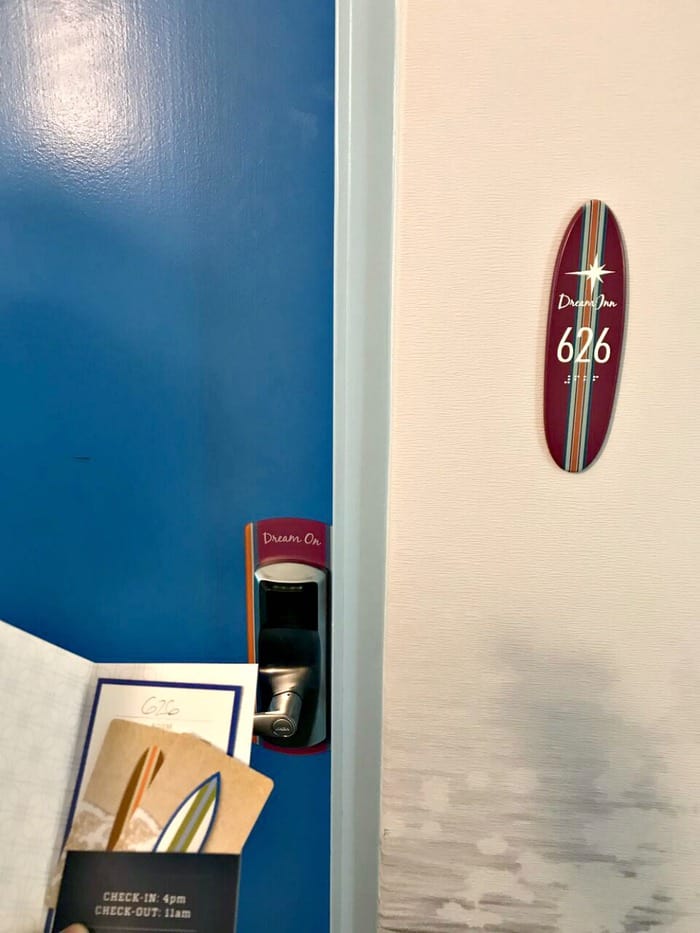 *This post is brought to you by the Santa Cruz Dream Inn. My opinions and love affair with Jack O’Neill’s Santa Cruz remain my own.

The Website uses Mediavine to manage all third-party advertising on the Website. Mediavine serves content and advertisements when you visit the Website, which may use cookies. Mediavine may collect IP addresses and location to serve personalized ads.  If you would like more information about this practice and to know your choices to opt-in or opt-out of this data collection, please visit http://www.networkadvertising.org/managing/opt_out.asp.
Necessary Always Enabled
Necessary cookies are absolutely essential for the website to function properly. This category only includes cookies that ensures basic functionalities and security features of the website. These cookies do not store any personal information.
Non-necessary
Any cookies that may not be particularly necessary for the website to function and is used specifically to collect user personal data via analytics, ads, other embedded contents are termed as non-necessary cookies. It is mandatory to procure user consent prior to running these cookies on your website.
SAVE & ACCEPT
6 shares
6 shares
error: Content is protected !!