Remember back in Elementary School sitting in class and doing that “art project” to enter in the PTA Reflections Contest?

Wasn’t that just the best time?

I still have an entry from Second Grade.

I’ll try and find it and scan it later..

Her dad told her she couldn’t go to school because she was running a fever.

Of course, then HE went to work and left me home with the child, who incessantly complained that she had to stay home, wouldn’t get her weekly prize, couldn’t turn in her homework and, most importantly, would NOT get to attend the PERFECT ATTENDANCE PARTY at the end of the year.

“Let’s compromise!” I told her.

“Here is a packet from your school with the “rules” for a contest called Reflections.

You need to think about the words “Beauty Is…” and what they mean and then you can make a picture and take a picture of what those words together mean to you.”

So we pulled out the Creation Station…our collection of arts and crafts supplies and she went to town.

It took her about an hour and a half: she needed some fabric.

She needed some yarn.

The glue wouldn’t come out.

Could she please use the scissors.

Could I spell “friendship” for her?

And then, she held the completed masterpiece up:

She missed her friend, Aspen.
She loves Aspen!
Combined that love and missing translated to “Beauty Is…Friendship”
After cleaning up, while she rested on the couch and drank some liquid.
She announced she knew what she was going to take a picture of for “Beauty Is…”
“That tree outside the window. When I woke up this morning and saw the first snow I thought that tree was beautiful!”
…and so with a robe, wrapped in a blanket and layers of socks, she stepped outside and captured her vision of Beauty!
and then we rested.
For the next two weeks, every morning she awoke telling me she had “A wonderful dream where I won the Reflections Contest!”
She inquired, “What do you win if they call your name?”
I didn’t know.
Then came a phone call from the PTA Reflections Chair telling us our child would receive an award at the Reflections Award Night!
We didn’t tell her.
Then through the mail came an invitation, inviting us to the Awards Night.
We gussied up.
My daughter wore a black velvet topped dress with a shimmery skirt.
She wore black tights and sat through her hair being washed, blow-dried, combed, curled and ratted.
We arrived at the school and walked through the display of artwork and entries.
We found her entry and she posed quite lovely in front of it: 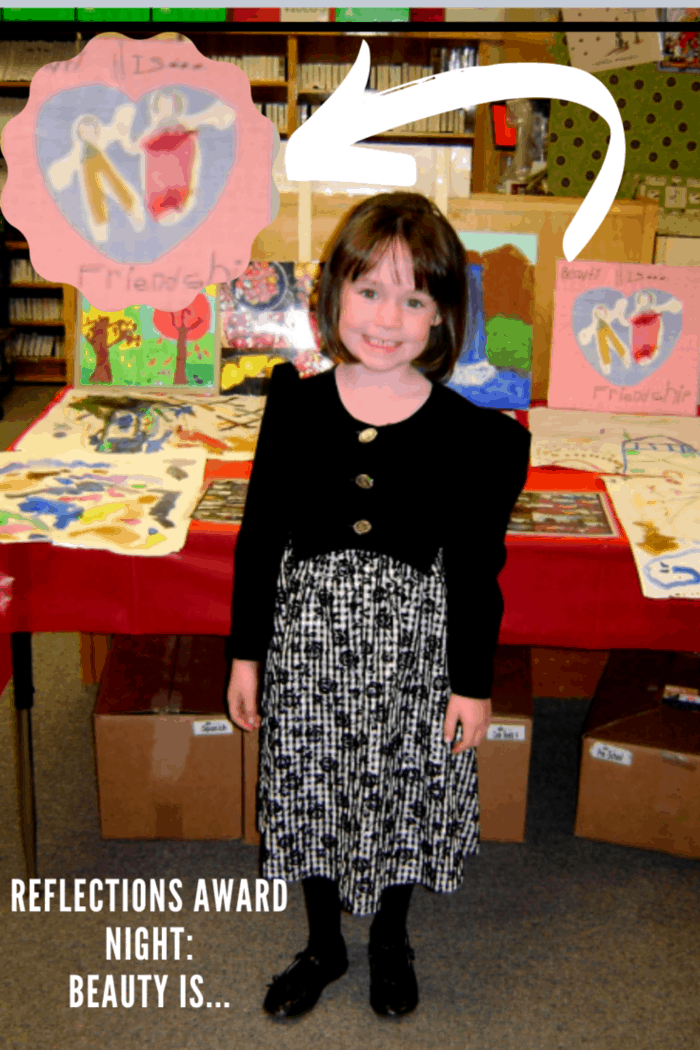 Then they announced Award of Excellence (for those of us who aren’t politically correct, that translates to FIRST PLACE!!!) and announced my daughter’s name! 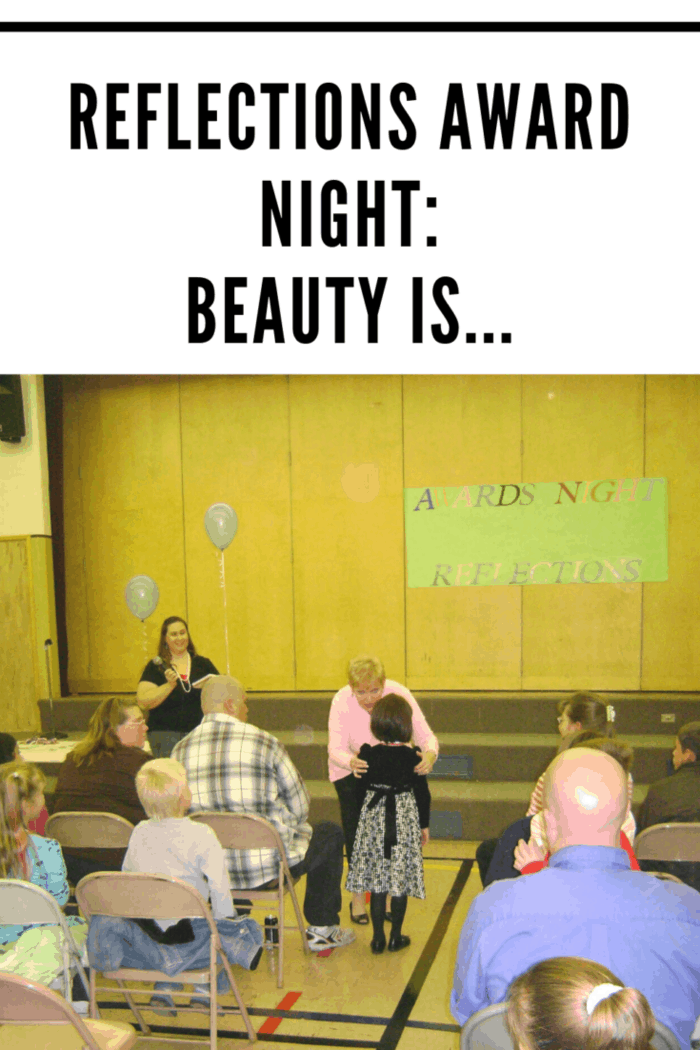 She walked to the front of the auditorium and they placed around her neck a medal, engraved with her name!
She walked back to her seat and was so proud of her medal. 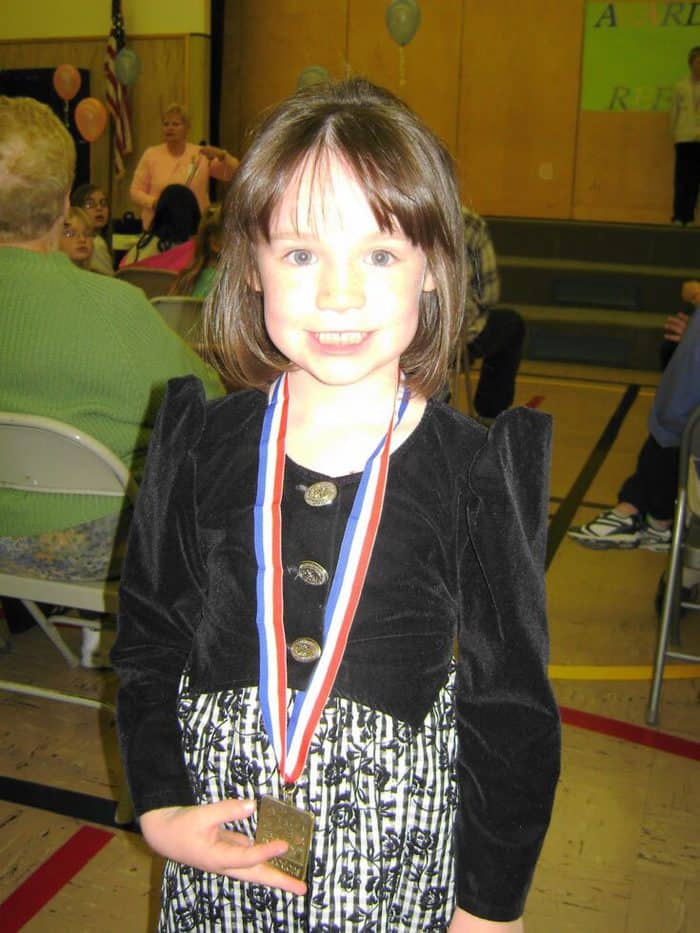 She was delighted!
She sat quietly while the other winners and entries were announced.
Then.
They announced her name AGAIN….
“Award of Merit” (translates to SECOND PLACE) for her Photography entry! 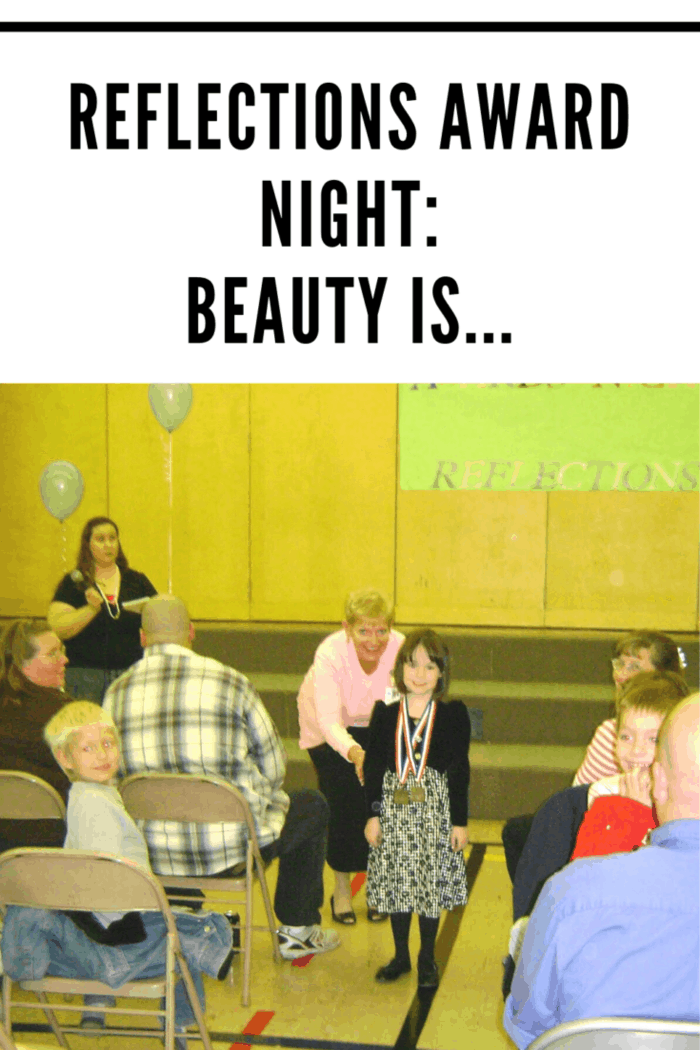 She was SO excited!
When it was over, she announced, “I was the ONLY one to get TWO medals. One girl got a medal, a certificate, and a necklace, but I got TWO medals!” 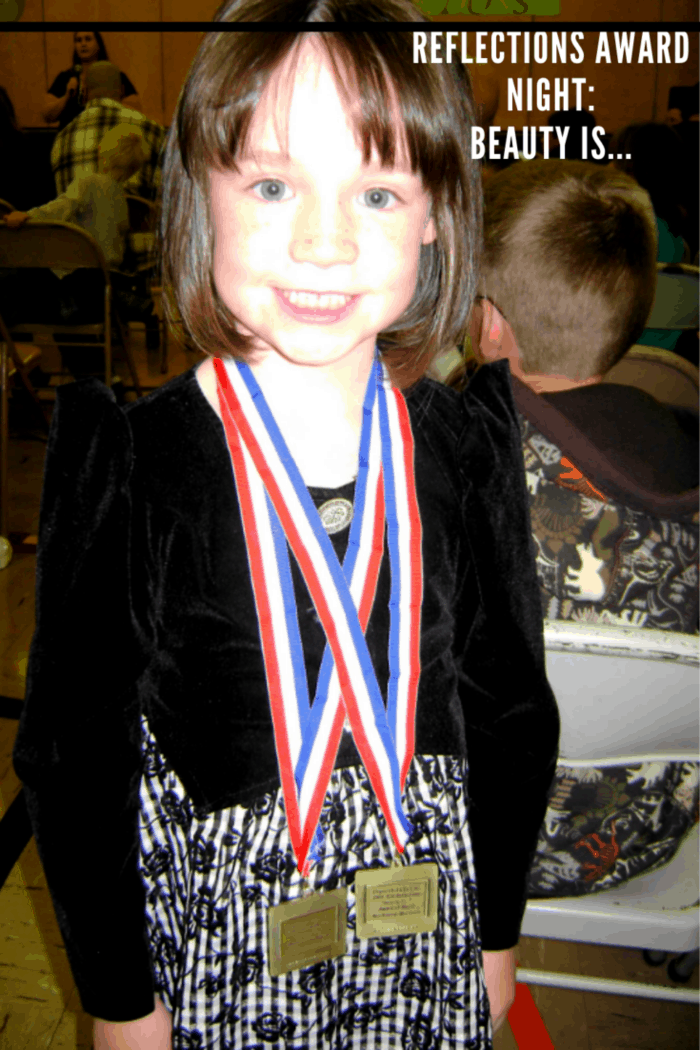 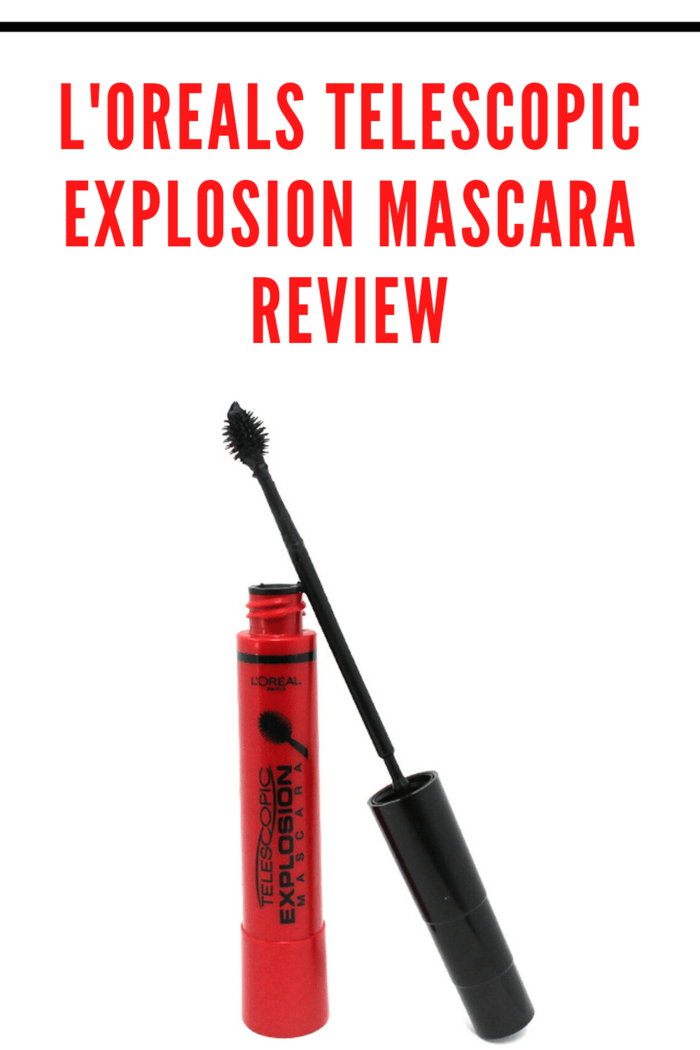 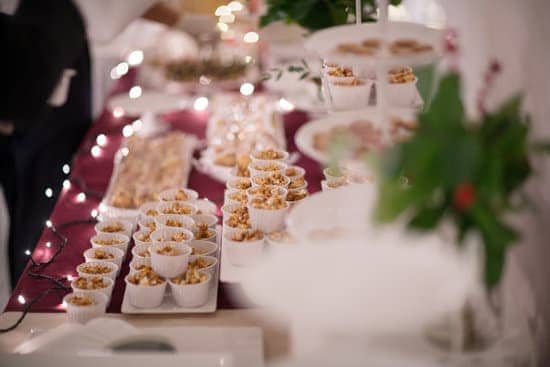