People fascinate me. The very nature of how someone reacts, what motivates them, and ultimately how adversity and success impact them and mold them into who they are is fascinating.

If you’ve ever been to a racetrack, you know the very people who make the event worth watching are ordinary, in they are just like you and me, but they are also extraordinary. There is camaraderie and yet competition. There is skill and determination. 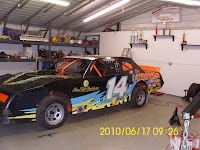 While some drivers are there for titles and points, Terry Brooks is there to race all around. He’s not racing for points. He’s racing for the sheer passion he has for the sport. The adrenaline finds it’s way into his veins as he takes a seat in his car and sits on the pole, waiting for the flag to drop and engines to roar.

It’s a family affair as wife, Allison Ann Brooks, and Terry’s three children, Jacob, age 6, Blain, age 5, and Isabella, age 2, cheer from the stands. They’re the motivation that carries him across the finish line. He, they’re hero, who is a champion to them whether he finishes first or not.

It all started twenty years ago at the age of eight when Terry started racing go-karts. The lawnmower sounding buzz of the engine set his heart on bigger cars and longer tracks.

In Terry’s dreams for the future, he ultimately would love for racing to be a full-time job. Still, he’s not going to forfeit his passion for just any opportunity; he has to be the right one, so for now, racing is his hobby and among his favorite past-times.

Fans in the stands reward him with their support. this and the challenge to be the best at every track he goes to… Terry’s a realist, “I know you can’t win them all, but Ii gives it my best shot no matter where I am or whom I’m racing.”

Whether you’re on the East Coast or just wanting to learn more about Terry and his racing teams, folks can find him on Facebook for both. Team One is Bertha Motorsports, and the other is TBJ Motorsports. Either team’s fan page offers up-to-date information on Brooks and his racing.

For a driver, there are life lessons to be learned. Brooks says racing has taught him, “To never give up on your dreams and hard work has never killed anybody.”

Brooks offers this advice to Rookies, “Try to remember always to race the racetrack, not the drivers.”

Hero is a status Terry reserves for two men. The first and foremost is his Dad, and the second, the late Dale Earnhardt Sr. Both are hard shoes to fill.

When Brooks isn’t racing around the track, he can be found around town driving a Chevy 1500.

While Brooks is a man of talent on the track, he owes his ability to race to the following sponsors: Car #14 is driven by Terry thanks to Mason’s Tire Service, FNO Racecars, FNO PowderCoating, Bea’s Gift baskets, MEM Engines, NASCAR, FrankWoodGutters. While Car #23 is made possible by Spanky’s Store.com, Bea’s Gift baskets, Mason’s Tire Service, NASCAR, FrankWoodGutters, RACECOM, R.E. Suspensions

When Brooks is asked to project where he sees himself in five years, he replies, “I wish I knew! It depends on the opportunities that may fall my wayIi would love to keep moving up and doing more traveling, maybe with some kinda of tour.”

Racing requires skill on the track, but there is also the necessity to maintain the car. Brooks says he does a lot of the work with his crew. He doesn’t lack mechanical ability, but operates under the philosophy that, “it is always better to work together as a team!”

Perhaps it was watching his dad, one of the smoothest drivers he has ever watched drive that carved this path for Brooks. Those moments in the stand, watching his dad do his thing makes Terry try that much harder to be as good as his dad and continue to improve on his own and be the same example to other drivers.

Brooks has a rigorous schedule to keep as a driver. He races 20-40 races, depending on the season. The furthest track he’s competed at is New Symarna in Florida for the World of Asphalt Championship. It was nine-hour trip and worth the drive.

Someday, Brooks hopes to make it to Bristol in an Asphalt car. He’s not sure he’s up for it in a Dirt Car.

Brooks has earned the following titles in his racing career: “Three Track Championships in Go-Karts, Three Track Championships in two Different Divisions at Concord Motorsports Park. I have won over 50 times in a full-body Stock Car and plan on this number to continue to grow as I progress in my career. The Most Meaningful would have to be The Last Championship that I won. We completely dominated that year and those kinds of years don’t come by too often. I mean the kind of year when even if you tried, it just seems you can do no wrong.”

I received no monetary compensation for this post. I am just sharing the talent of a driver in a sport I love.