Do you love food and nostalgia? This copycat Pizza Hut Priazzo brings the 1980s to the dinner table.

Those who grew up in the mid to late 80’s (1985 to be exact) may remember that Pizza Hut used to have a delicious dish known as the Priazzo.

This deliciousness was the invention of Charles Brymer, who was a marketing consultant who had also named the Pontiac Fiero.

It was a thick pan pizza that was more like a pie filled with meat, veggies, etc.

Some may say it might be more comparable to lasagna, but with a crust. 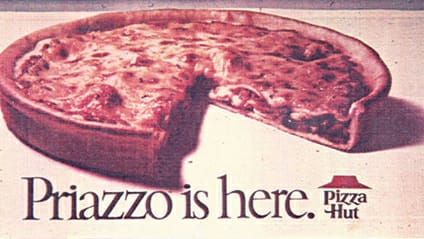 It was so popular at the chain restaurant that there is a Facebook group: Bring the Pizza Hut Priazzo Back.

The appeal of the Pizza Hut Priazzo was not just one but deep-dish offerings times FOUR.

Yeah, yeah, I hear you in the back.

These weren’t traditional deep-dish pizzas in the pure term.

More of a–what’s the word we use now? Fusion?

A fusion of stuffed pizza colliding with deep dish pizza.

A layer of sauce.

The layer of pizza toppings.

Another layer of crust.

The original came in three varieties, each named after Italian cities.

A blast from the food in our past we want back.

For those wanting a little blast past from the past, here’s a Pizza Hut Priazzo commercial:

To be fair, there was a long wait, which is most likely why it is no longer on their menu.

The wait was so long that Pizza Hut took it off their lunch menu and had specific times when the priazzo would be served, typically after 4 PM on weekdays and weekends.

Pizza Hut last mentioned this menu item in print by Pizza Hut in 1993.

We simplified the recipe for the same fun and great flavor, but without the hassle!

This recipe uses only Mozzarella cheese, however, the possibilities are endless.

If you want to make it more authentic, Pizza Hut has several different cheese blends that they use.

One source says their signature “cheese blend” is made up of four kinds of cheese (sharp Cheddar, Edam, Romano, Parmesan).

I have been told the original Pizza Hut “cheese blend” had six kinds of cheese: Mozzarella, Cheddar, Parmesan, Provolone, Monterey Jack, and Romano.

We think the Mozzarella has a more authentic taste than the 1985 Pizza Hut Priazzo.

While Pizza Hut took it off the menu in 1986, we created this copycat Pizza Hut Priazzo to bring it back to dinner tonight! 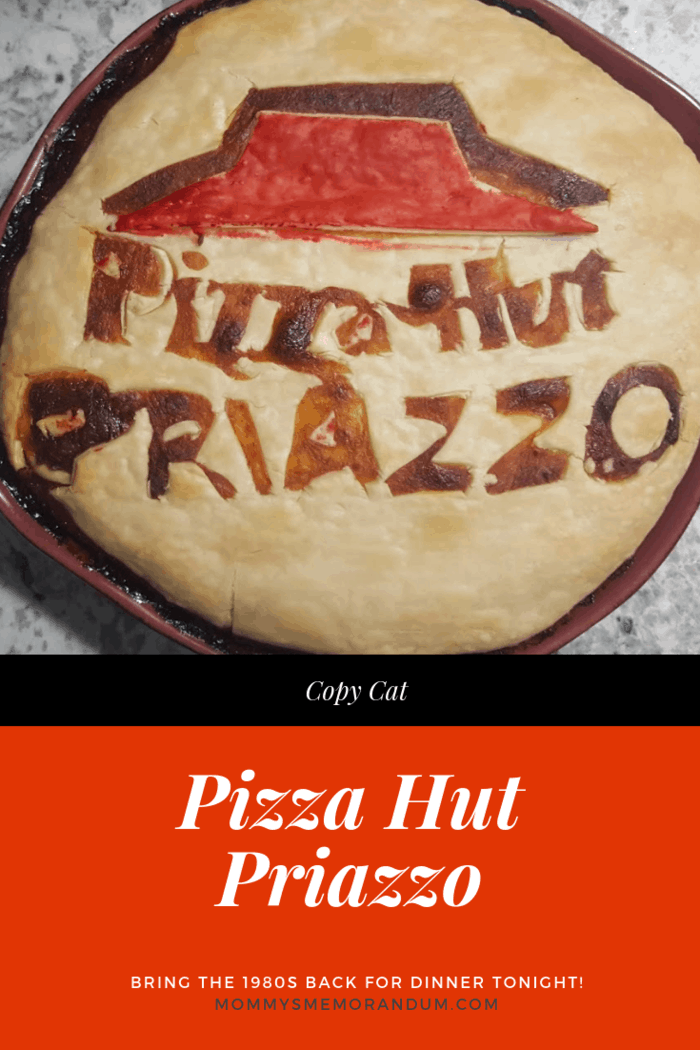 Bring the 1980s back to dinner with this Copy Cat Pizza Hut Priazzo! 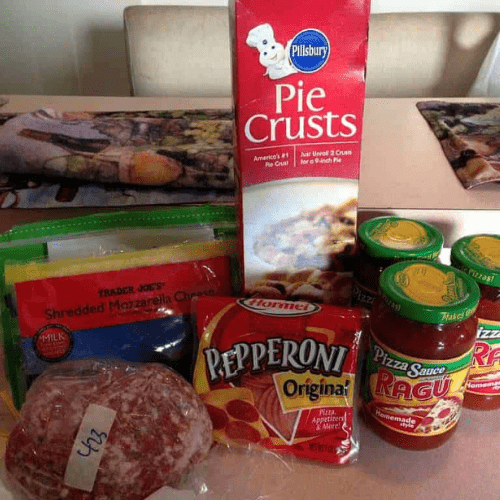 How to Make a Priazzo:

You’ll want to work it up the sides of your pan. In the end, the dough should overlap the sides making a barrier to hold the thick, delicious pizza sauce. 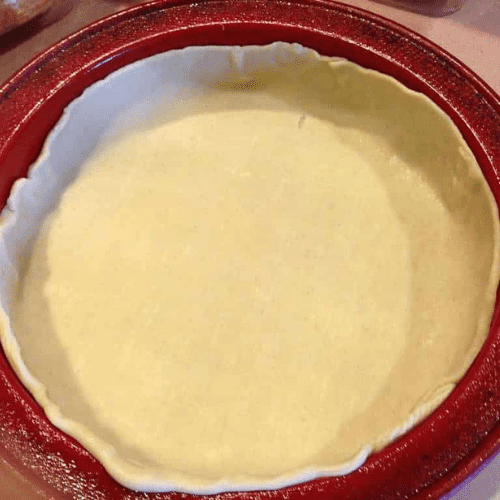 Brown sausage over medium heat in a large skillet.

Add the small onion here, if using–it will cook with the sausage. 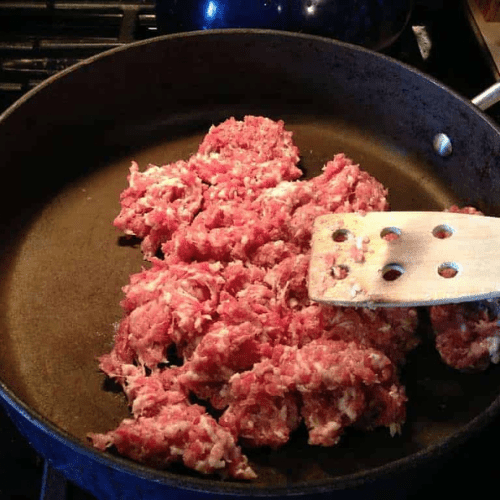 Drain the grease from the sausage. 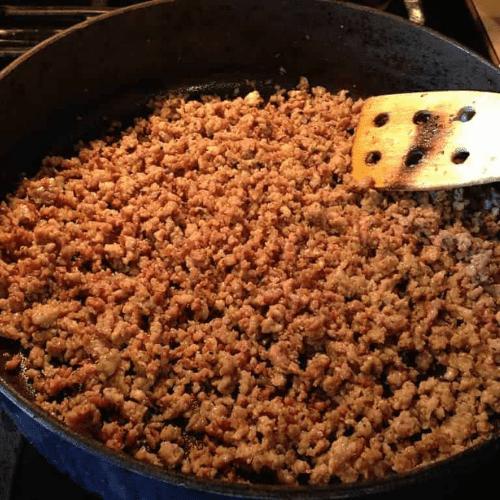 Add the meat from the pan to the prepared pie crust. 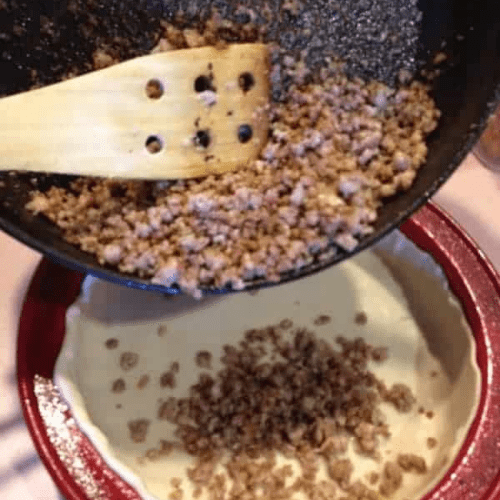 Pour half of the jar of Ragu pizza sauce onto the sausage. 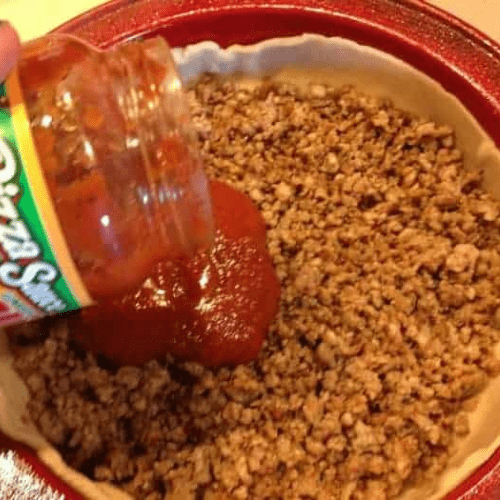 Layer 2 cups of mozzarella cheese on top of the meat. 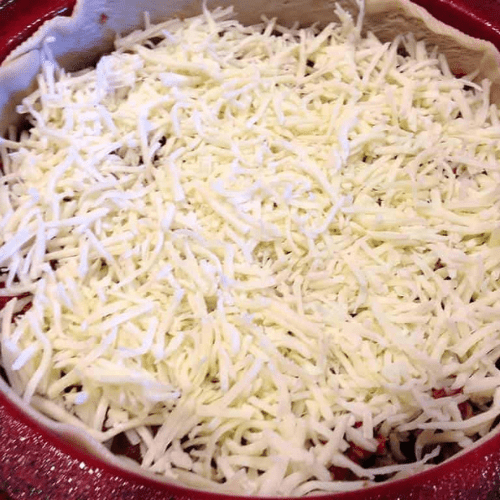 Next, pour the second half of the jar of Ragu pizza sauce over the layer of mozzarella cheese. 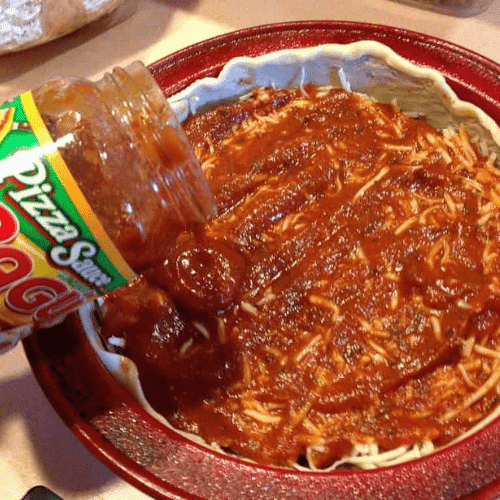 Layer the pepperonis on top of the sauce. 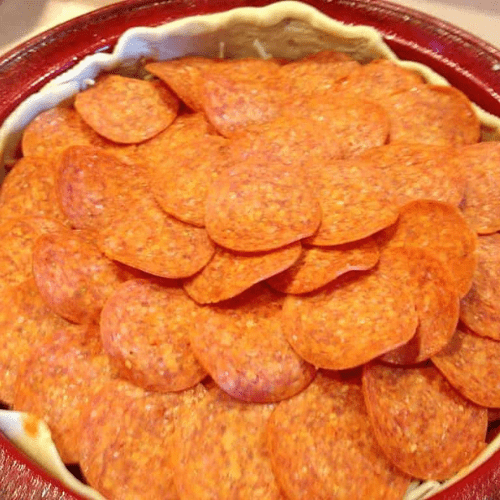 Add half of the pizza sauce from the second jar of Ragu pizza sauce on top of the pepperonis and smooth out. 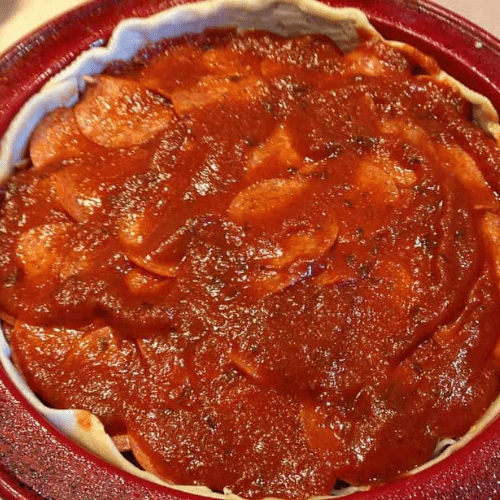 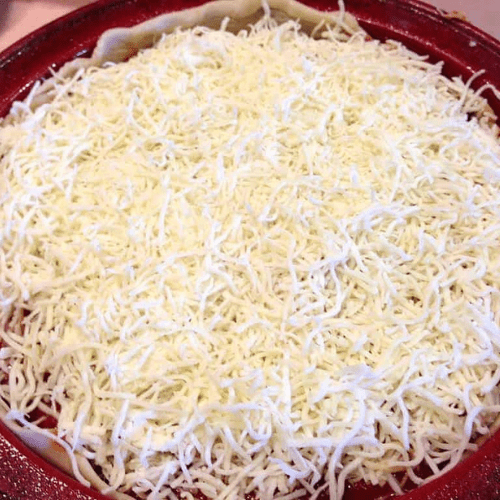 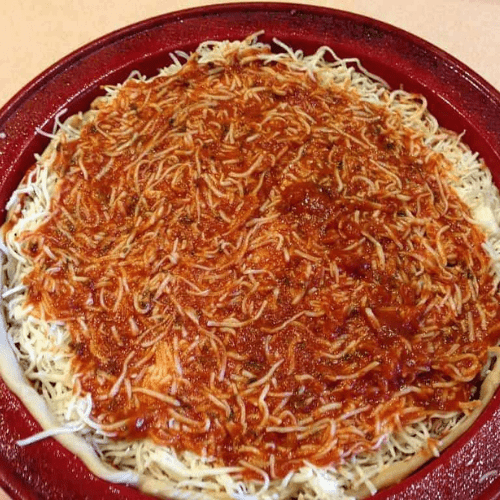 Unroll the second Pillsbury pie crust on top of the pizza pie and tuck the edges in.

Crimp edges after tucking to keep all the goodness inside. 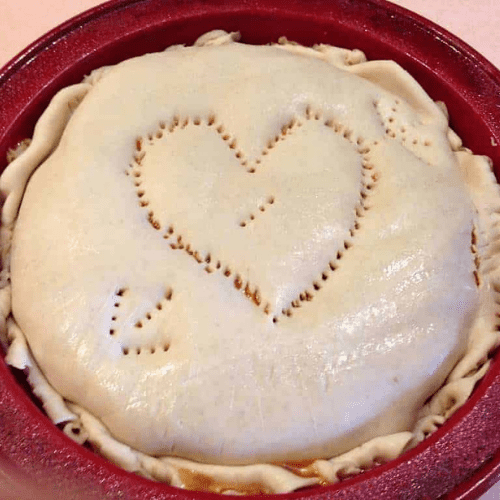 Cut holes on top for ventilation.

Bake for approximately 35 minutes or until the crust is a golden brown and cooked through.

That first bite is going to be amazing!

We all know Pizza Hut has options, so if you want to Flashback, even more,

Try these variations for your Copy Cat Pizza Hut Priazzo:

Meat eater’s Delight pile on the Canadian bacon but leave out the small onion.

At to the sausage chopped, red or green bell pepper and onion. 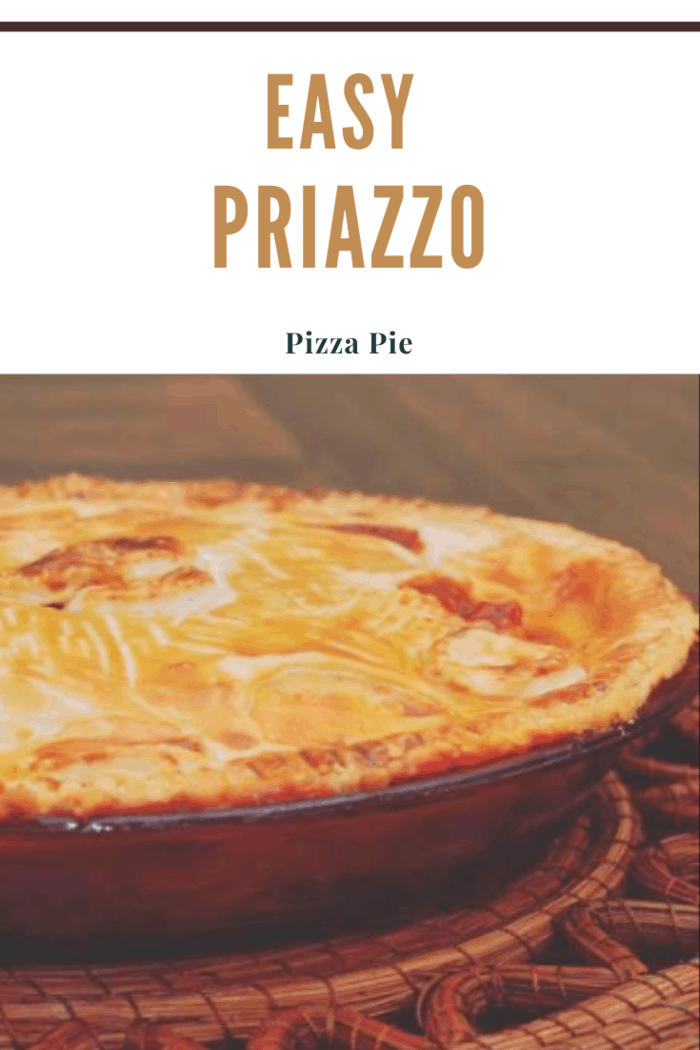 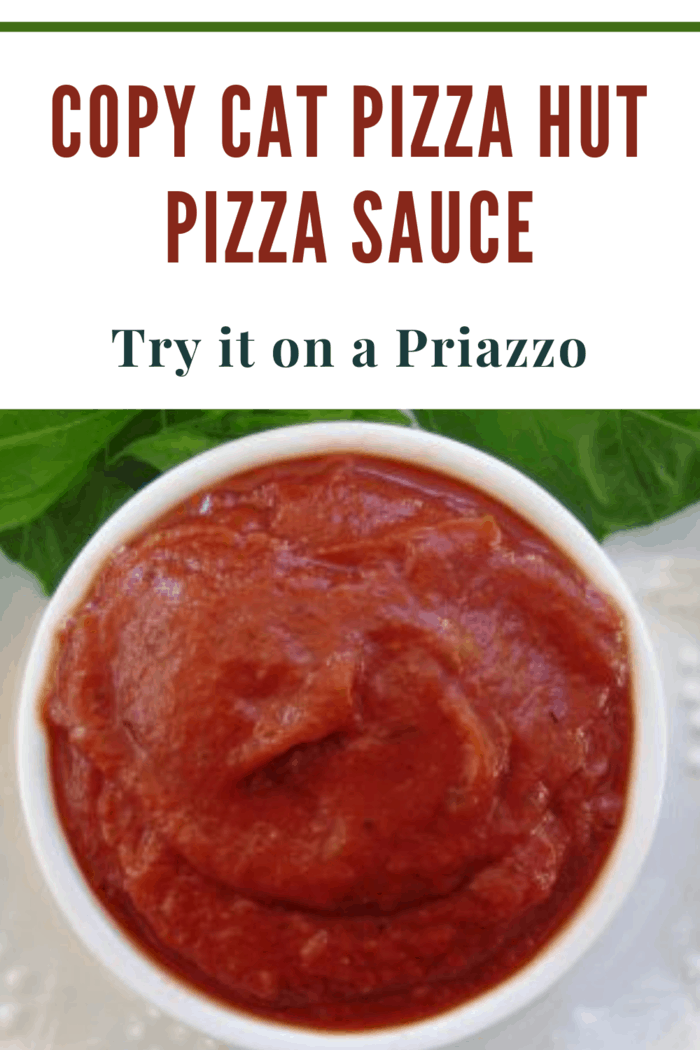 In a small saucepan, combine all ingredients.

Bring sauce to a rapid boil.

Next, reduce heat to low, cover, and simmer for 30 minutes, or until it is to your desired thick pizza sauce.

What is your favorite version of the Pizza Hut Priazzo Pizza?

TIP: You’ll want to work it up the sides of your pan. In the end, the dough should overlap the sides making a barrier to hold the thick, delicious pizza sauce.

Nutritional Information may not be correct

The Website uses Mediavine to manage all third-party advertising on the Website. Mediavine serves content and advertisements when you visit the Website, which may use cookies. Mediavine may collect IP addresses and location to serve personalized ads.  If you would like more information about this practice and to know your choices to opt-in or opt-out of this data collection, please visit http://www.networkadvertising.org/managing/opt_out.asp.
Necessary Always Enabled
Necessary cookies are absolutely essential for the website to function properly. This category only includes cookies that ensures basic functionalities and security features of the website. These cookies do not store any personal information.
Non-necessary
Any cookies that may not be particularly necessary for the website to function and is used specifically to collect user personal data via analytics, ads, other embedded contents are termed as non-necessary cookies. It is mandatory to procure user consent prior to running these cookies on your website.
SAVE & ACCEPT
Skip to Recipe
9 shares
error: Content is protected !!