I am so excited to share with you my unboxing from FossilEra.com. They have an incredible collection of crystals, fossils, and shark teeth. What I love most about FossilEra.com is that you are buying the crystal photographed, no more “may be similar in appearance or size.” The description is specific to the photo, so you know exactly what you are buying.

I have long been looking for a Celestite for my collection.

I love the lovely blue color of these stones.

It’s the perfect piece for my growing crystal collection.

It might be one of my most favorite stones.

This is a 7.7″ wide, sky blue Celestine crystal-filled geode collected from Madagascar.

This specimen has many large crystals and is stunning.

Celestite, also known as Celestine, Coelestine, Eschwegite (of Lévy), Sicilianite is a crystal found chiefly in sedimentary rocks (especially limestones), along rivers, streams, and ocean beds–is the heaviest mineral in the ocean.

These fibers can be found near or among Gypsum, Halite, and Anhydrite.

In some instances, Celestite may fluoresce under ultraviolet light.

Celestine crystals can also occur in geodes and are often found among clear Quartz and Amethyst crystals (shop FossilEra.com).

Celestine is a mineral and principal strontium sulfate (SrSO4), a radioactive element.

The International Gems Society (IGS) states that Celestite is safe; however, Celestite should not be used in gem elixirs, gem waters, massage oils, or other consumable products.

Fun Fact: One unique trait of Celestite is that it’s highly flammable when ground into a powder.

The element strontium is mixed into a metal salt and used to create red-colored fireworks. Blue fireworks are created from the element copper.

This mineral has crystal clusters in shades of pale blue, white, and sometimes pink, green, brown, gray, or colorless.

While Celestine is found worldwide, it is most common in Madagascar and Sicily, Italy.

The name Celestite originates from the Latin word caelestis, meaning celestial, “of the sky,” or heavenly, as the soft blue color of these stones is like the sky on a clear

day. In fact, according to Greek Mythology, Celestine got its name from the beautiful network of stars known as the Pleiades, or The Seven Sisters is why it possesses qualities of the heavens and angels.

Their mothers, Atlas and Pleione, were pursued by Orion all over the Earth.

Seeing this and feeling pity, Zeus changed the sisters into a flock of doves, set in the heavens, now forming the star cluster known as The Pleiades.

A formal description of strontium was made in 1792, and in 1798, the mineral became known as ‘Celestite.’

Celestine is very fragile, 3 to 3.5 on the Mohs scale, and hard to cut and facet.

Celestite’s fragility makes it a stone that is hard to cut and facet.

It is often seen in displays and jewelry with step cuts.

If found in jewelry, it is common to see small pieces.

Be cautious if your piece needs a jeweler.

A jeweler’s torch exceeds 392° F; heat will cause the stone’s colors.

Celestine, in various sizes, is most common in raw, uncut, geode crystal displays due to its fragility.

Celestine is rarely 10 carats; however, some specimens are known in the 30-carat range.

It is more common to find Celestine in small jewelry pieces or raw, uncut, geode crystal displays of various sizes.

Energy healers believe that Celestite has a powerful connection to heaven and the angelic realm and offers mental clarity and purpose.

Its positive vibration can increase understanding, higher consciousness, and when used in meditation and prayer, to bring mindfulness. 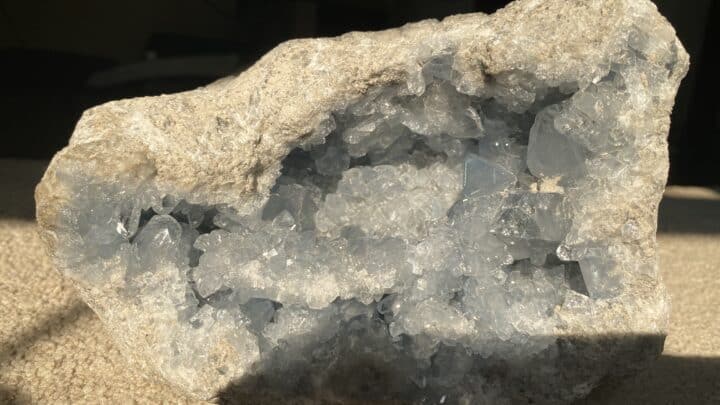 The scientific community recognizes Celestite for its composition, specifically the element strontium.

Acantharea, or protozoa creatures, can compose their rudimentary skeletons of these pale blue crystals by biomineralizing or creating the mineral using strontium.

This group of radiolarian protozoa is the only creatures to do this.

Celestite cultures because strontium sulfate is scarce in seawater, and the crystals dissolve after the acantharians die.

Recently, more blueish-white Celestite has been found in the United States, in the Lake Erie region.

Some Celestite from this region are naturally double-terminated (two faceted ends).

The world’s largest geode is a Celestite geode, discovered in Ohio in the 1890s by winery works drilling a well.

This geode is now known as Crystal Cave.

This amazing celestite cave is owned and operated by Heineman Winery.

During Prohibition, tours of the Crystal Cave kept the family-run winery from demise.

It’s 35 feet in diameter at its widest point, with Celestite crystals up to 18″ across.

The Celestite in the cave is primarily colorless, lacking the pale blue crystal color.

Some Celestite crystals are over two feet long, weighing more than 300 pounds. 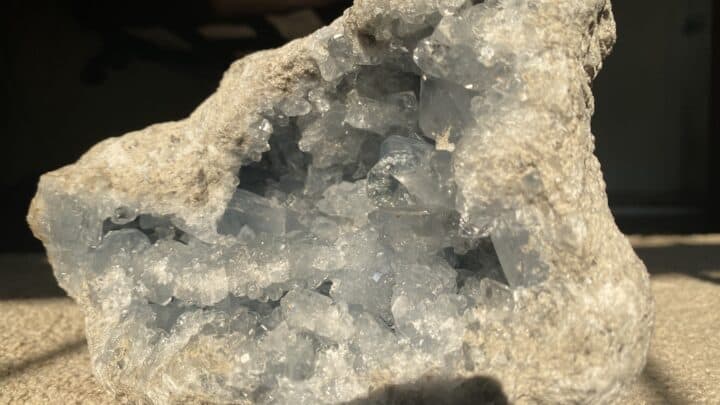 Rather than a crystal to bring good fortune, Celestite’s more widespread use is for metaphysical and healing purposes.

This crystal is for everyone.

Those seeking the stone’s metaphysical properties find the blue celestite cluster to be the most prolific option.

It’s revered as a high vibration crystal associated with celestial beings, guardian angels, and connection to the spiritual world and spirit guides.

Celestite is strongly connected to divine energies and cosmic, supernatural forces and is a powerful healing crystal.

Some refer to Celestite as a “teacher for the New Age,” connecting one with the Angelic realms.

Legend is Celestite can share knowledge and tell stories from angelic realms to those listening.

In the big picture, angels, or positive forces, whatever you want to call them, have the same effect.

The high frequency of the celestite stone works with the higher chakras, namely the Crown Chakra and Third-Eye Chakras, and the Throat Chakra for expression.

This mineral is best used for pursuing spiritual development and spiritual healing.

How to use Celestite for Healing

While Celestite is among the most powerful spiritual growth crystals, it is also an excellent healing stone.

Its gentle energy is soft enough for everyone to enjoy.

It does very well as a visual piece in a private space used for mindfulness and meditation practice.

Used in meditation, Celestite can help with clarity of mind, calmness and bring deep states of meditation.

Place Celestite near your bed as the prismatic crystals are a great facilitator for restful sleep and an excellent stone for dream recall.

Place Celestine on your nightstand or a small cluster near your head for best results.

Blue Celestite can bring mental calm and clarity into any chaotic circumstance.

These blue stones are excellent in helping one flow easily through traumatic periods with success.

A piece of Celestite in your pocket can offer courage to those who have stage fright, anxiety, suffer from agoraphobia, a fear of heights, or public speaking.

It is a great tool to help find your spirit guide and develop clairvoyance, psychic abilities, and the gift of prophecy.

This stone of heaven has been known to help rescued animals trust humans again or for injured animals to recover their strength.

Celestite in the home brings a harmonious atmosphere.

Blue Celestite can bring mental calm and clarity into any chaotic circumstance and help bring harmony and conflict resolution to dysfunctional relationships.

Have a stressful job?

Place Celestite on your work desk to help relieve tension, and make stress fade away.

Celestite can also act as a pain reliever and detoxifier. 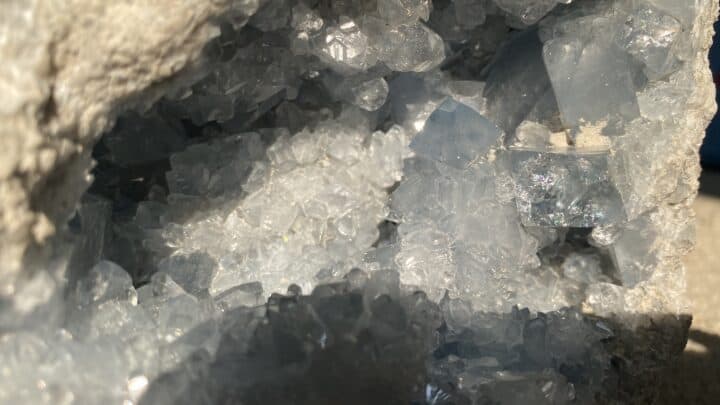 How to Charge Celestite:

Charge the crystal with celestial energy (the moon or the sun).

The moon charge should be used with Celestine for emotional, intuitive power, encouraging emotional intelligence and thoughtfulness.

The lovely clusters of this stone will fade if left in direct or strong, direct sunlight for prolonged periods.

How to Clean Celestite:

For cleansing, smaller pieces can be cleansed using Selenite slabs or slates.

Small and more significant pieces of Celestitel can also be cleansed with Palo Santo.

Celestite is a soft mineral, do NOT cleanse it with water; immersed in water, it can be damaged. 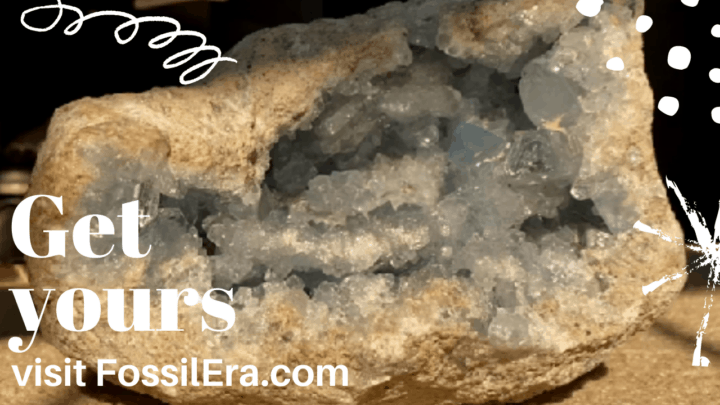 Celestite is associated with the higher transpersonal chakras, as I’ve mentioned.

The higher realms of the chakras allow free-flow of these higher frequencies for spiritual awareness.

Gemini for self-acceptance or communication.