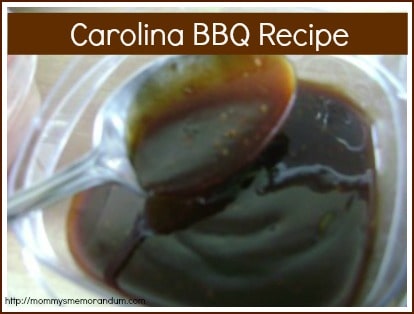 The region you’re in determines the base of your BBQ sauce.

There are six BBQ types you should know about, says Thrillist.com, and BBQ varies by region. You’ll find BBQ sauce with ingredients of tomato, vinegar, and mustard. Lexington-style barbecue, a town near where I live, that’s well-known for its BBQ, adds a touch of tomato paste to thicken and sweeten its vinegar-based sauce, which they actually call a “dip”.

Some of the best BBQ we’ve had is Arthur Bryant’s in Kansas City. The sauce was thick and tomato-based with spices, vinegar and sugar. It is an evolution from the Lexington Dip, but so different because it’s thick and sweet and sits on the surface.

The first commercially produced barbecue sauce was made by the Georgia Barbecue Sauce Company in Atlanta, Georgia. Its sauce was advertised for sale in the Atlanta Constitution, January 31, 1909. Heinz released its barbecue sauce in 1940.

This is tangy and makes the whole house smell amazing!

Heat oil in large saucepan over medium heat. Add onion and cook for 5-minutes. Stir in

Add onion and cook for 5-minutes.

Bring to a boil, then reduce heat and simmer for 5-minutes.

The Website uses Mediavine to manage all third-party advertising on the Website. Mediavine serves content and advertisements when you visit the Website, which may use cookies. Mediavine may collect IP addresses and location to serve personalized ads.  If you would like more information about this practice and to know your choices to opt-in or opt-out of this data collection, please visit http://www.networkadvertising.org/managing/opt_out.asp.
Necessary Always Enabled
Necessary cookies are absolutely essential for the website to function properly. This category only includes cookies that ensures basic functionalities and security features of the website. These cookies do not store any personal information.
Non-necessary
Any cookies that may not be particularly necessary for the website to function and is used specifically to collect user personal data via analytics, ads, other embedded contents are termed as non-necessary cookies. It is mandatory to procure user consent prior to running these cookies on your website.
SAVE & ACCEPT
471 shares
error: Content is protected !!