The concept of a bucket list stretched back as early as ancient Greek. In 225 BC, Greek engineer Philo compiled The themes or thémata, meaning “things to be seen,” for ancient pilgrims. Today, this list is known as the Seven Wonders of the Ancient World; according to History.com, they are the Colossus of Rhodes, the Pyramids at Giza, the Temple of Artemis at Ephesus, the Pharos of Alexandria, the Mausoleum at Halicarnassus, the Zeus Statue of Olympia, and the Hanging Gardens of Babylon.

Of the seven, only the Pyramids remain.

Five either disappeared or are in ruins, and there is enough archaeological and historical evidence to support that they have existed.

The last one – the Hanging Gardens of Babylon – is a little harder to prove.

Not only are the ancient records inconsistent, but experts have found no trace of the lush gardens in the site of Babylon, despite extensive excavation activity in the area.

Experts now surmise: is it possible that we’re looking at the wrong place? 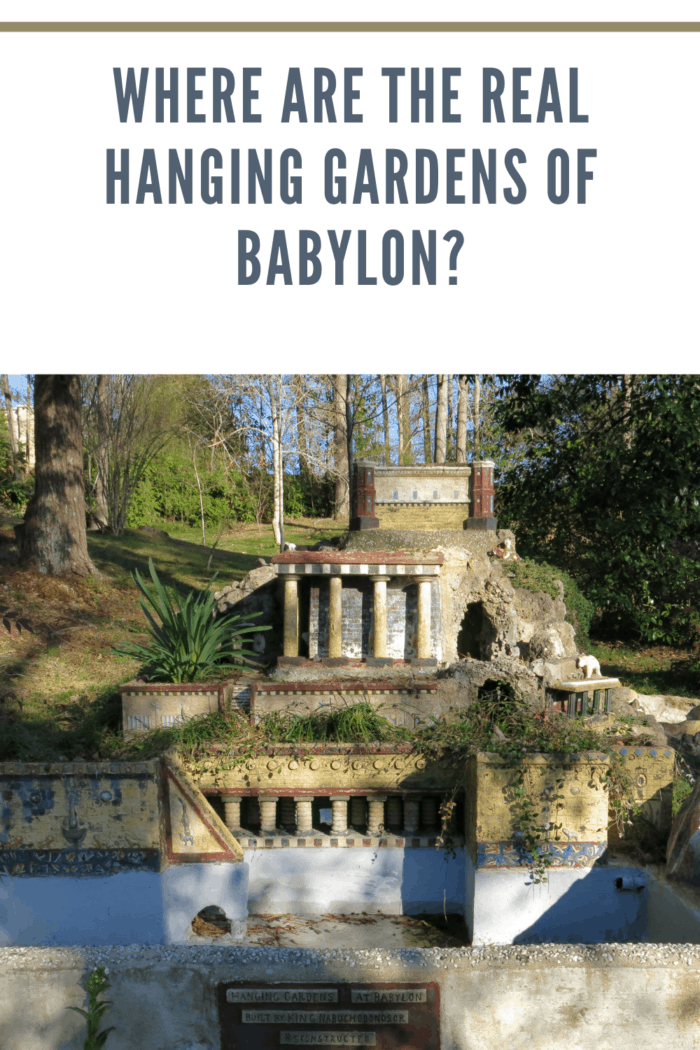 The most illustrious of its leaders was King Nebuchadnezzar II, who captured Jerusalem and annexed it to his empire.

Apart from its political and military power, Babylon was also one of the most spectacular places in the ancient world.

Under Nebuchadnezzar, built the Hanging Gardens and the Ishtar Gate. Learn more on National Geographic.

The latter was a grand entryway glazed with blue bricks and embellished with icons of animals and deities.

Unlike the Hanging Gardens, archaeologists found the Ishtar Gate, which is now located in the Pergamon Museum in Berlin.

The gardens didn’t have so much as stone carving, or irrigation pumps found.

The Mystery of the Hanging Gardens

Babylon enjoys extensive historical records of its kings, accomplishments, and even the streets’ names.

Unfortunately, there is no mention of the splendid Hanging Gardens, even beyond the reign of Nebuchadnezzar.

The first mention of the gardens is in an ancient source by Berossus of Kos, a Babylonian priest who moved to Greece.

However, his work survives only as quotes in the work of later writers.

The descriptions of Berossus have been corroborated by archaeology.

The Hanging Gardens were a series of palatial stone terraces with lots of large trees and flowers, towering against white clouds’ backdrop.

The vegetative terraces were an architectural style and a functional purpose: they made irrigation easier.

The water came from a source at the top and cascaded to the levels below.

It can be imagined that in the time of Babylon, torches illuminated the terraces, and water cascaded like a complex fountain running the length of the levels.

There was a romantic element to the gardens, as well.

Berossus claims that it was built as Nebuchadnezzar’s gift to his wife, Amytis, who felt homesick in Babylon’s arid deserts and yearned for her green homeland.

Many other writers spoke about the garden in detail, but it’s important to note that the descriptions were written centuries after Nebuchadnezzar, and the writers never visited Babylon.

They also didn’t know much about engineering or horticulture.

Could It Be Elsewhere?

Dr. Stephanie Dalley, an honorary research fellow at Oxford University, says that the reason there’s no evidence found in Babylon is that the Hanging Gardens were not in Babylon.

Instead, the legendary gardens were built about 480 km north of Babylon, in Nineveh’s ancient city, the capital of the rival Assyrian Empire.

She asserts that the Assyrian king Sennacherib (see Wikipedia) and not Nebuchadnezzar commissioned the gardens.

Sennacherib had a reputation for engineering innovation, and archives about his reign described irrigation systems ahead of their time.

Some historians attribute the invention of the Archimedes water screw to Sennacherib.

The mix-up can be attributed, she says, to the fact that Assyria conquered Babylon in 689 BC.

When Babylon fell, Nineveh was hailed as the “New Babylon.”

There’s enough evidence to give the assumption a solid footing.

Recent excavations in Nineveh’s site revealed remnants of an extensive aqueduct system that ferried water from the mountains to the city.

Artifacts depicted a lush garden powered by an aqueduct.

These excavations are closer to the Hanging Gardens’ historical mentions than any other site unearthed in Babylon.

That said, experts who believe this theory asserts that the wonder should be renamed the Hanging Gardens of Nineveh.

And it would finally put the looming doubt of the garden’s existence to rest.