Nature is spectacular. The proof rests in the natural wonder and natural beauty of Natural Bridge. The immensity will leave you in awe–215-feet of solid rock, carved by the hands of Mother Nature, arching over Cedar Creek. It’s the star attraction of Virginia’s Natural Bridge State Park. 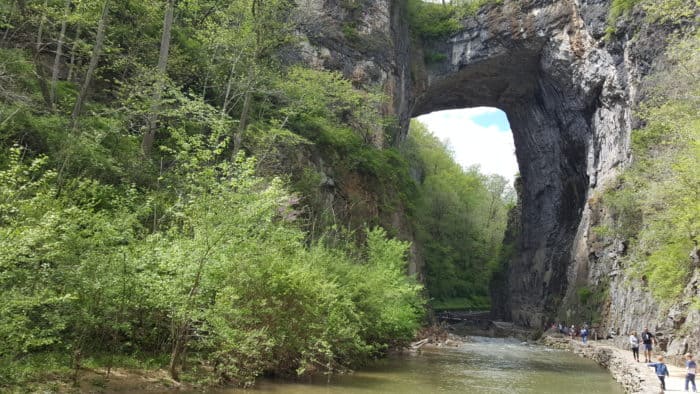 Check-in at the visitor center to purchase tickets and then walk the self-guided tour from the Visitor Center, down a flight of stairs, along all of Cedar Creek Trail. 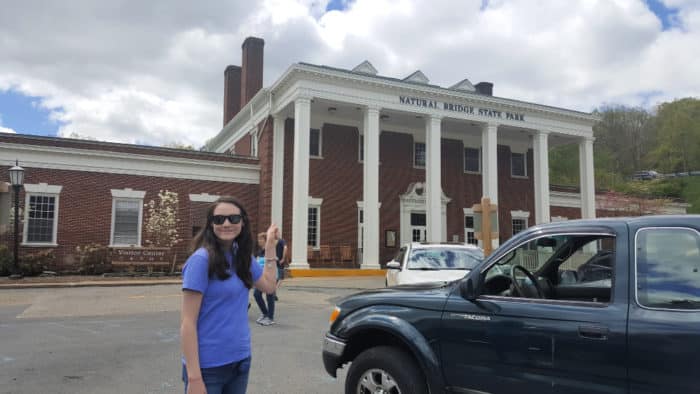 It’s .90 miles each way on the out-and-back trail. The total distance to walk to the final stop, a waterfall, and back is 1.8 miles.

The trail is paved part of the way, relatively flat, and I’d say an easy trail. Walking shoes are recommended, and I’d suggest bringing water to stay hydrated, as there is no access to drinking water along the trail.

Natural Bridge State Park is in the Blue Ridge Mountains, an area traveled for thousands of years, with the Monacans passing through with trade routes. The Great Road passed a few miles north, taking the European settlers farther south and west. 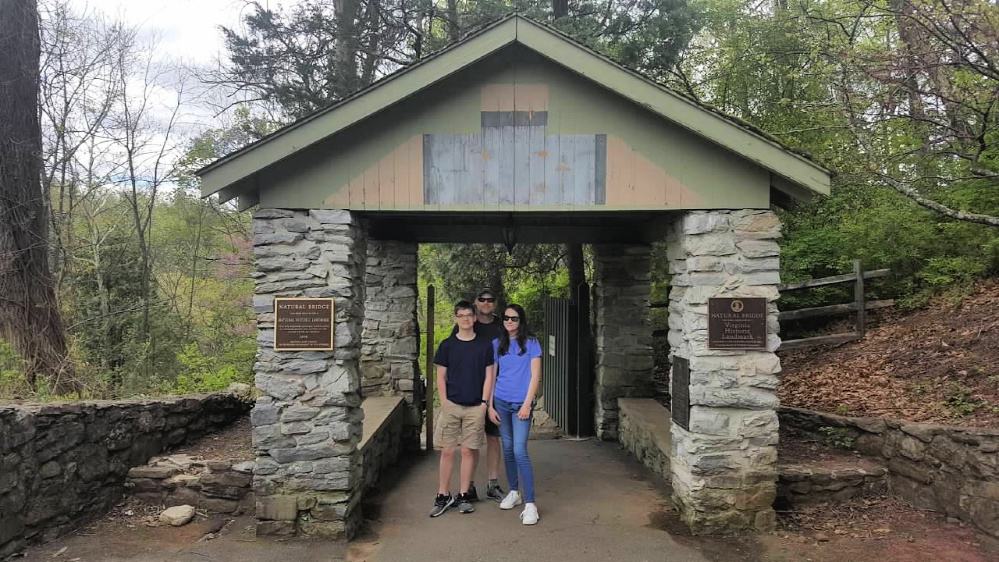 Through the rock building, you’ll walk down flights of stairs.

The Cascade Creek runs alongside.

This creek connects with Cedar Creek downstream of the Natural Bridge. 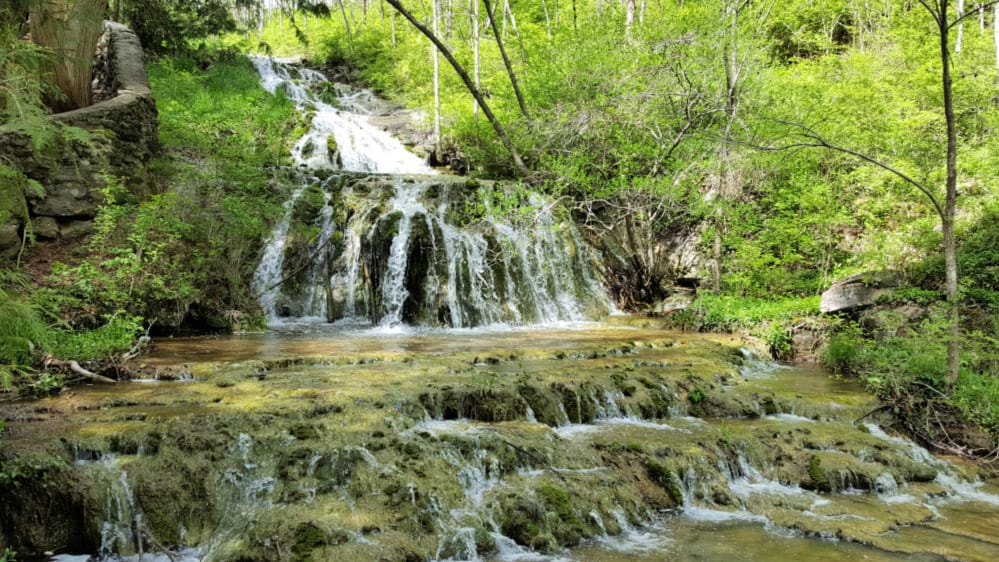 The stairs are close to the area where the first footpath for park guests was located.

You’ll encounter Thuja occidentailis arborvitae or northern white cedar on a landing. It is a somewhat uncommon species found all along the Cedar Creek Trail.

This particular tree died in 1980.

Using the average growth rate estimations, this tree is thought to be over 1,600 years old.

The age, however, cannot be confirmed without cutting the tree down and cutting the rings.

At the bottom of the stairs is the Cedar Creek Cafe.

A shuttle picks up and drops off to and from the visitor center.

From the Cafe, within 0.3 miles, you’ll catch your first glimpse of Natural Bridge. 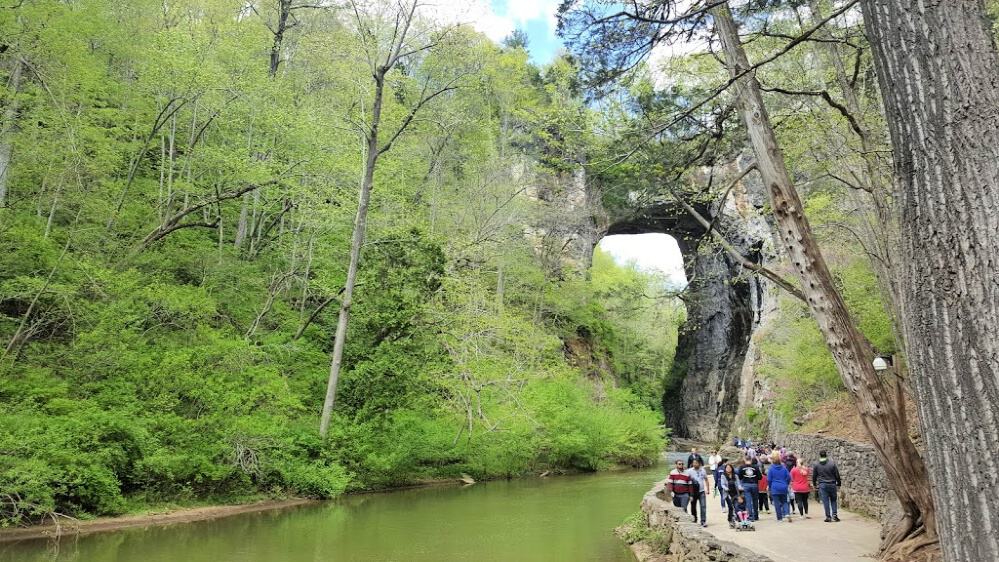 The Natural Bridge and all the rocks along the Cedar Creek Trail are made of limestone.

It was deposited under a shallow tropical sea nearly a billion years ago, causing the layers seen today.

Then it was pushed up into the Appalachian Mountains as North America and Africa Pushed together during the formation of Pangea.

As groundwater slowly dissolved the limestone, a linear cavern was formed.

This led to a collapse that left only a tiny portion of the ceiling standing, now known as the Natural Bridge.

The Front of Natural Bridge:

The front of the Natural Bridge is 0.7 miles from the Cafe.

You will find a survey marker in the walkway, halfway under the bridge.

This indicates the spot where the first survey was conducted in 1750. 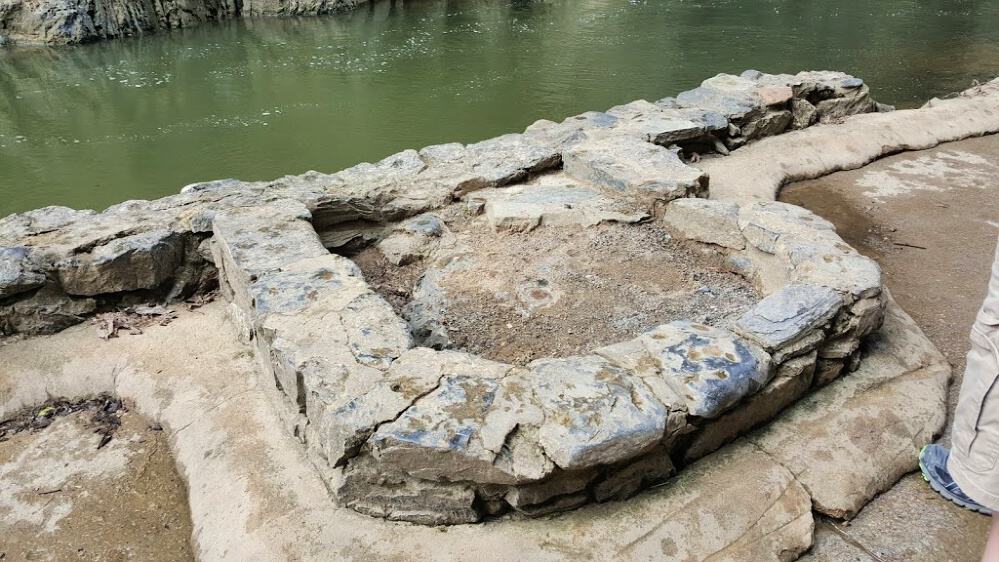 That survey did provide the first measurements of the Natural Bridge.

The legend continues that George Washington climbed approximately 20 feet up and carved his initials into the rock on the creek side of the bridge. (Look for the rectangle. His initials are inside this.) 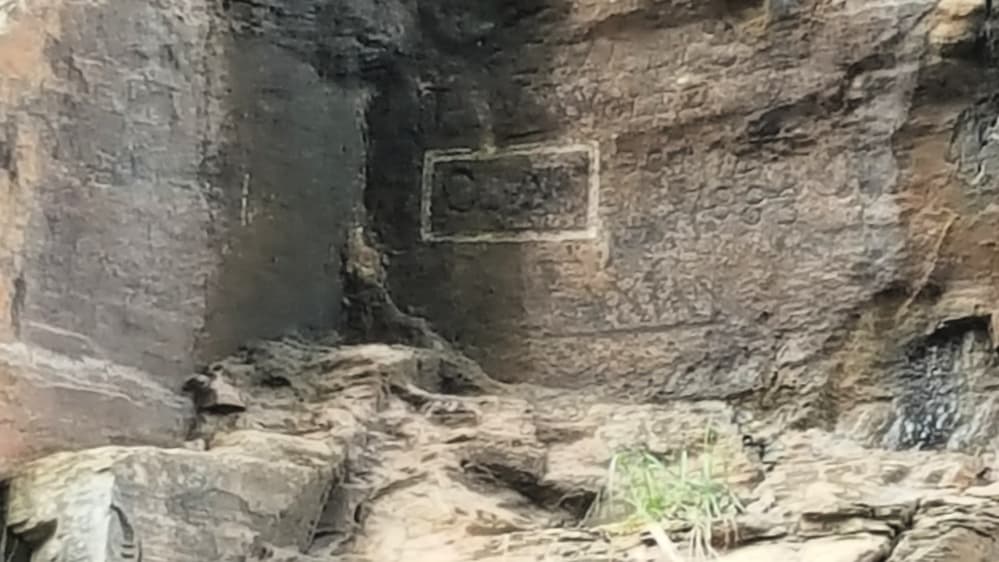 There is no conclusive evidence to suggest he was here, but a “GW: is still visible.

Look across the creek, 20 feet up from the water’s surface, and you will see a white box inside the GW.

The Back of Natural Bridge:

The back of the bridge is 0.17 miles from the cafe.

After Peter Jefferson surveyed the Natural Bridge, he took stories back to his young son, Thomas Jefferson.

He visited when he was in his twenties and purchased the Natural Bridge from King George II on July 5, 1774. 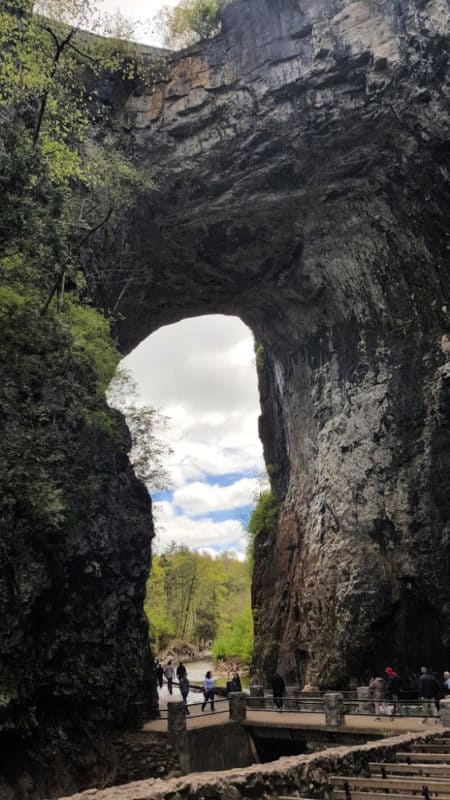 Jefferson also bought 157 acres, including the bridge, for 20 shillings.

Jefferson owned the property until his death, and it was sold due to Jefferson’s massive debt. It went through many different private owners over the years.

On September 24, 1016, it became a Virginia State Park, meaning it would be protected in perpetuity, just as Jefferson always wanted.

The 215-foot tall Natural Bridge is a limestone gorge carved out by Cedar Creek.

The newest Virginia State Park is more than just the bridge.

The Monacan Living History Exhibit is .35 miles from the Cafe.

This is a recreation of a Monacan town.

You can talk to interpreters dressed in period clothing and demonstrate various seasonal activities.

It is set up to explore various parts of the Monacan life, from wigwams and long grass houses to tanning stations and the tools they used. 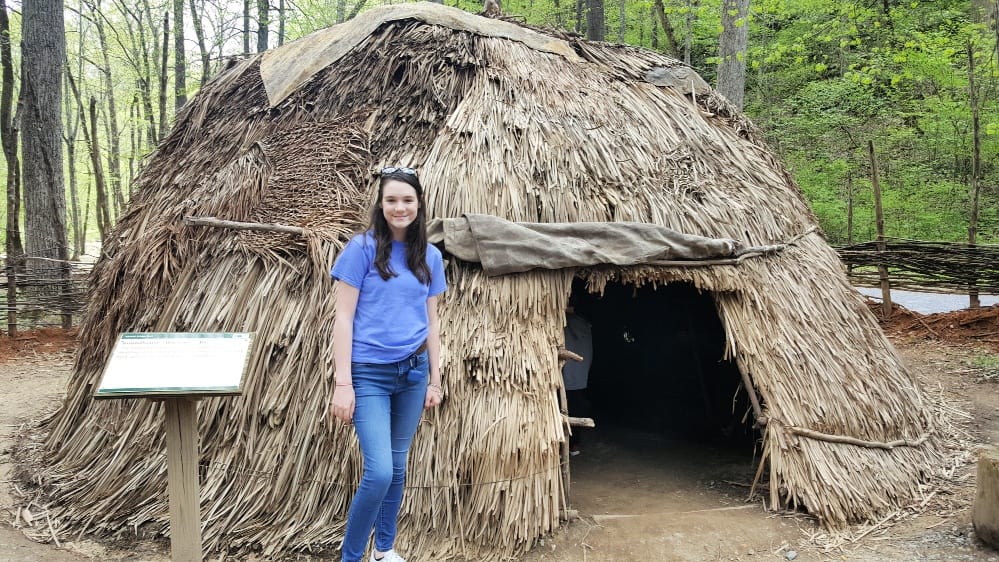 Not on the self-guided tour, but a fun find is a quote by J.R. Tolkien carved into the rock. 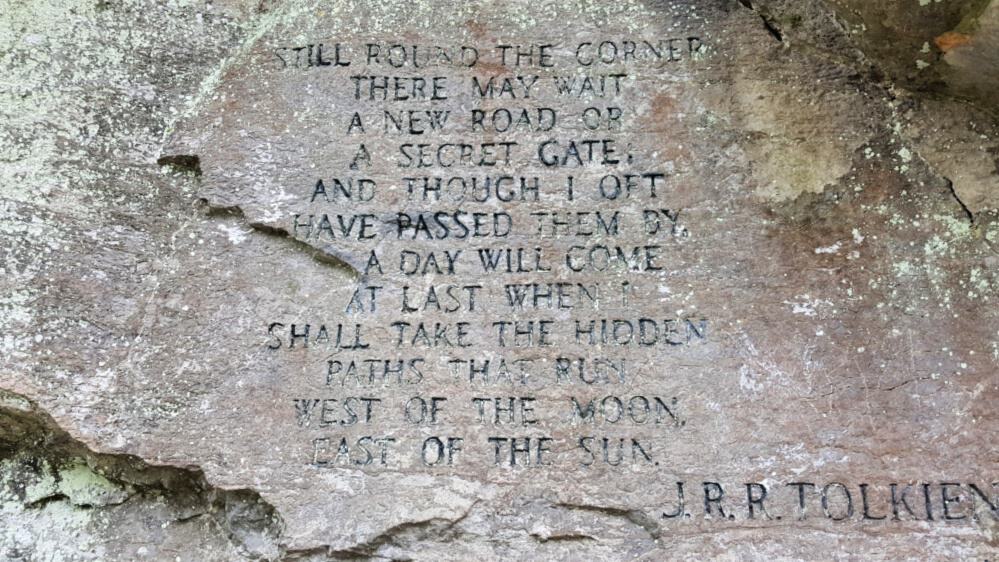 No one knows how the quote came to be.

Perhaps J.R.R. Tolkien passed through here, and there were rock carvers set up.

At the Natural Bridge, you’ll see carvings with stone carving sets where the letters are neat and uniform, as well as carvings that appear the individual took the time to do it on their own. 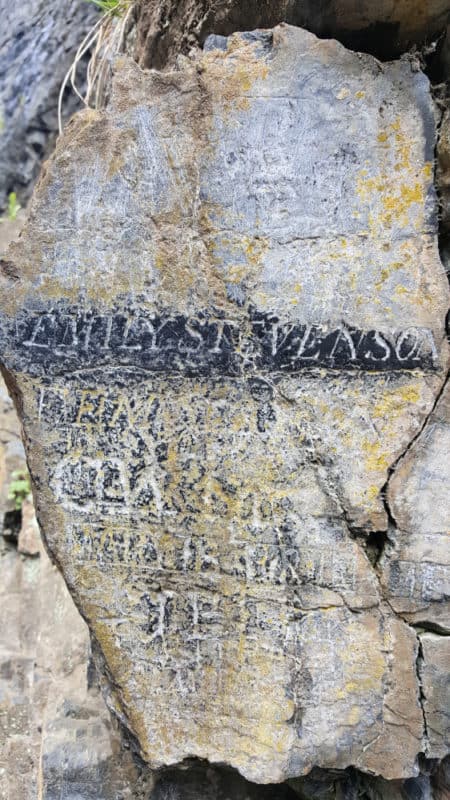 Outside of Saltpeter Cave:

This cave is .46 miles from the cafe.

The saltpeter cave was formed when a bend in the creek washed away a soft layer of the rock. 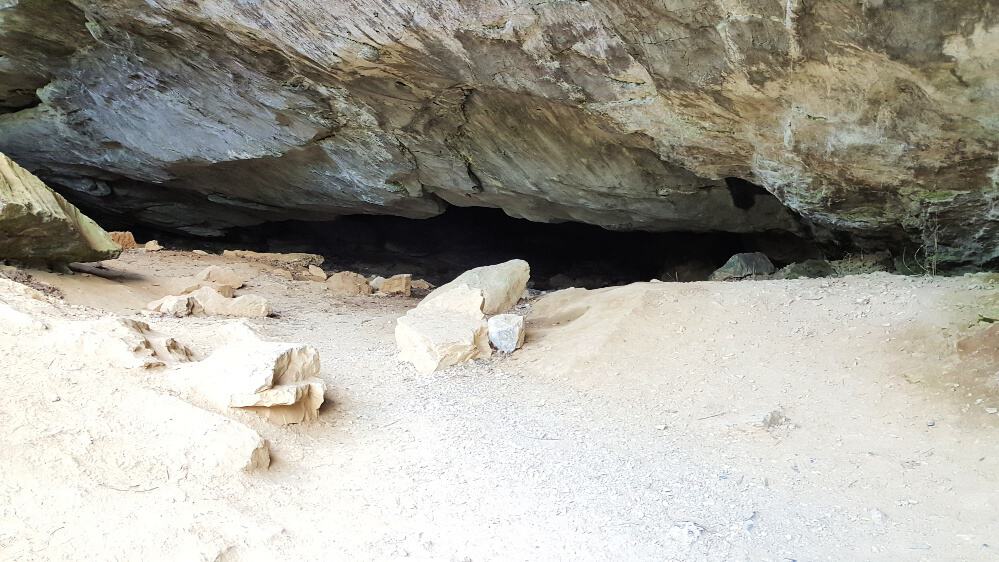 Follow the calming Cedar Creek Trail as it winds past Saltpeter Cave and Lost River to Lace Falls.

You’ll pass through an incredible living history of Monacan Indian Village, where you can explore how they lived, including inside their shelters.

There are education programs sharing life in a typical Monacan Indian village.

Stay for Nature’s art show at Sunset under the bridge. 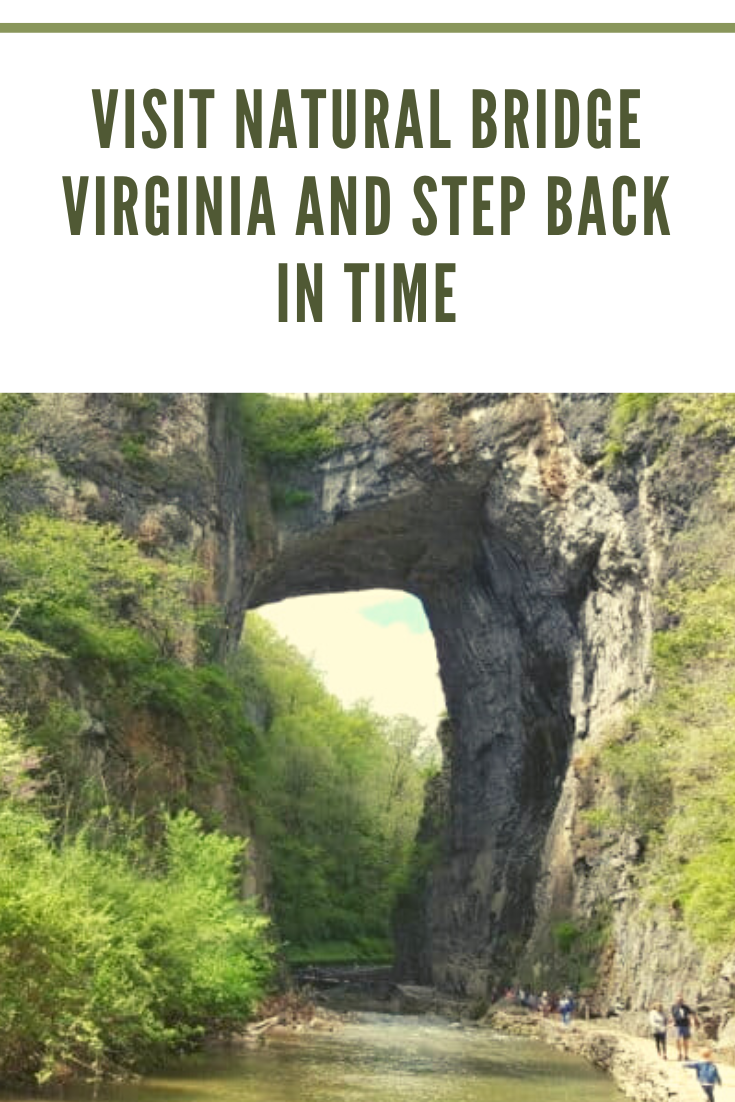 See It for Yourself

A shuttle from the visitor center to the bridge trail is available for those not wishing to take the stairs.

Virginia Department of Transportation study of Rt. 11, which runs atop Natural Bridge.