The Tuttorosso Tomatoes challenge might change your mind about a can of tomatoes is a can of tomatoes, right? I’m going to show you the difference in the quality of tomatoes before you begin your recipe. Let’s face it; the best recipes start with the best ingredients. My grandmother taught me something, which makes my mom’s cooking unique. As a new mom, I lost sight of this, trying to stretch the budget; family recipes didn’t taste the same from my kitchen. Don’t get me wrong, I love a bargain, but when it comes to a recipe, I’m more about the quality of my ingredients.

Here’s why I prefer Tuttorosso tomatoes over Hunt’s tomatoes. 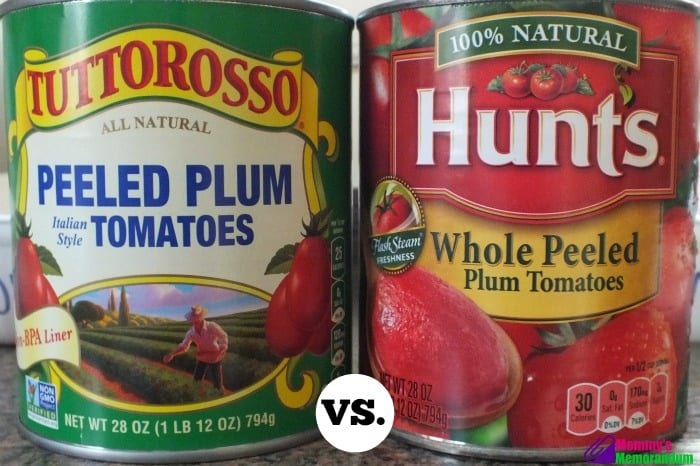 Here is the Nutritional Information from each brand: 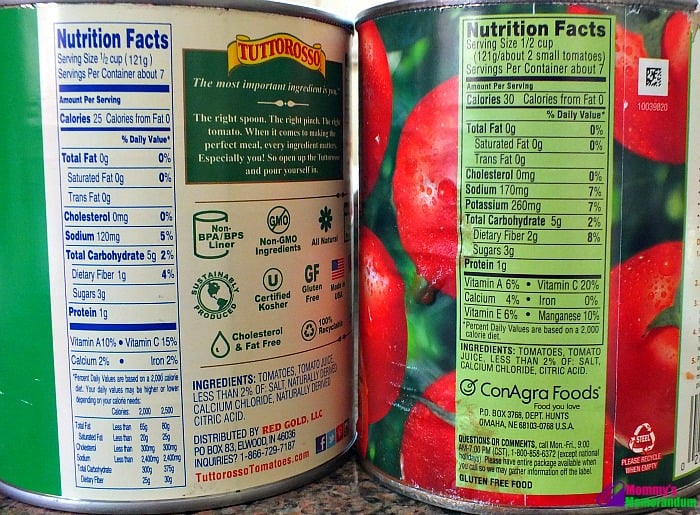 I first opened the can of Tuttorosso Tomatoes and gently poured the tomatoes and juice into the styrofoam tray. 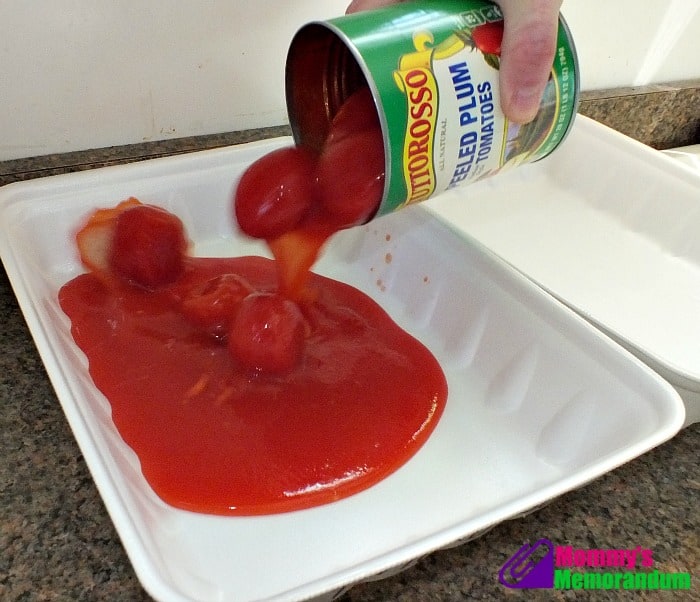 Next,  I opened the can of Hunt’s Tomatoes and gently poured the tomatoes and juice into the second styrofoam tray. 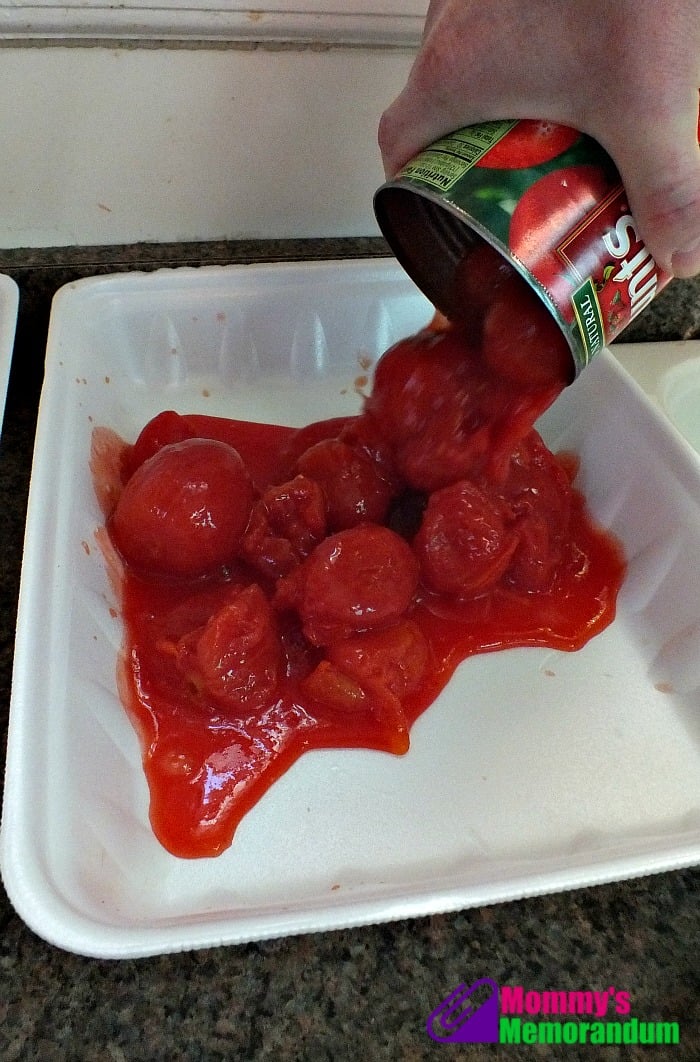 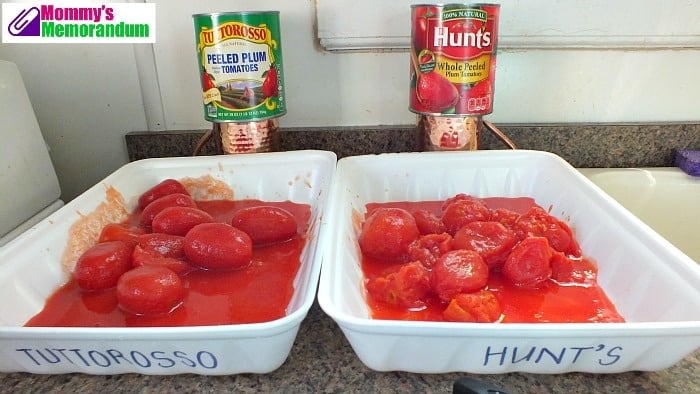 Next, I examined the products side-by-side. I compared each brand’s appearance based on the rating scale: 1 for Poor Quality to 5 for Extraordinary Quality. 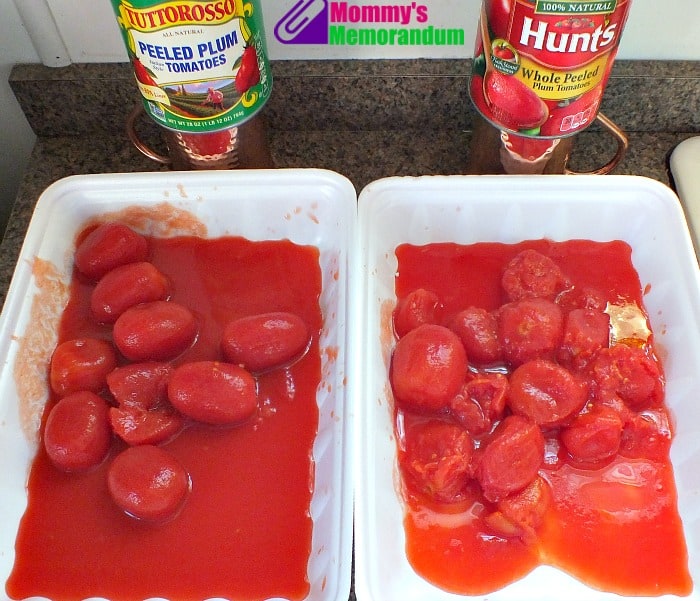 I looked at the tomatoes and rated them on the following:

In looking at the Red of the Tomatoes, I asked:

The brighter the hue of the red, the higher the score. The less red (or more orange/yellow shades), the lower the score.

In looking at the Uniformity of the Size of Tomatoes, I asked:

In looking at the Tomato Integrity, I asked:

In the next part of the challenge, I moved the tomatoes to the top of the tray and propped up just enough to allow the juice to move away from the tomatoes. I pushed aside any broken tomatoes, yellow shoulders, tags (pieces of peel still attached), or tomato peels. 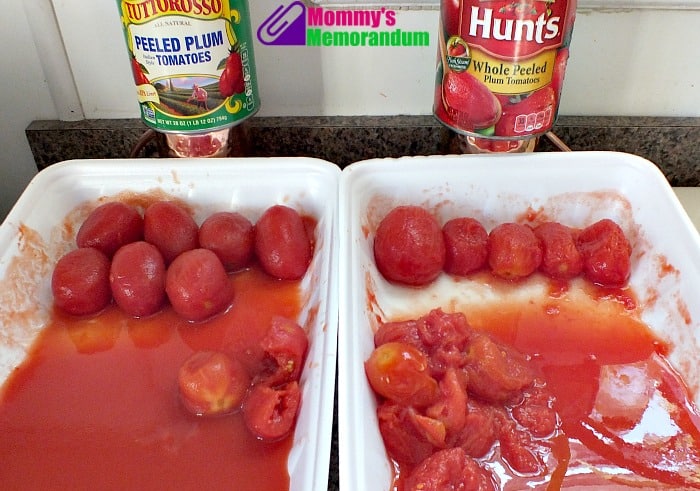 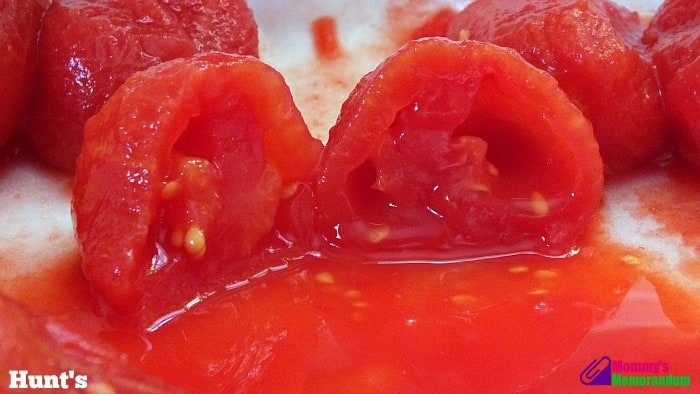 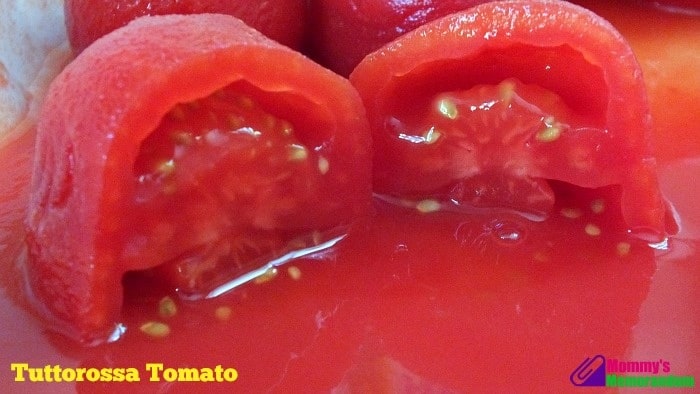 Then I tasted the tomatoes and evaluated their intensity of flavor and flavor attributes.

For the last comparison, I poured the juice and tomatoes of each tray into a strainer and rinsed the tomatoes with water. Upon rinsing, I placed the tomatoes back onto the white tray to look for peels, broken or mashed pieces, yellow color, etc. 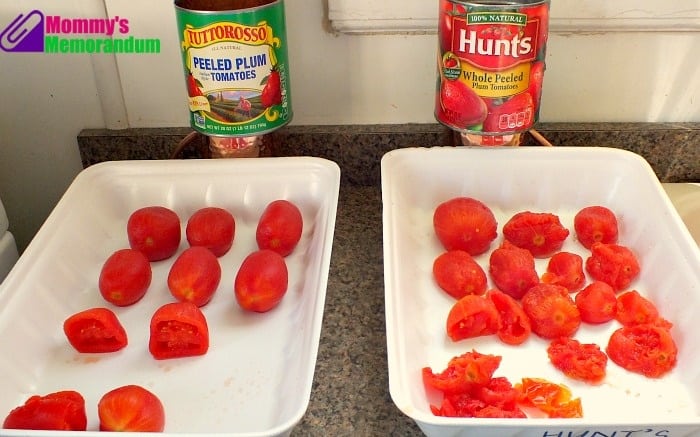 During each test comparison, my husband was in awe of the differences between Tuttorosso and Hunt’s. The Hunt’s tomatoes had the PEEL on many of them. I point this out ONLY because Hunt’s label says explicitly, “Whole PEELED Plum Tomatoes.” 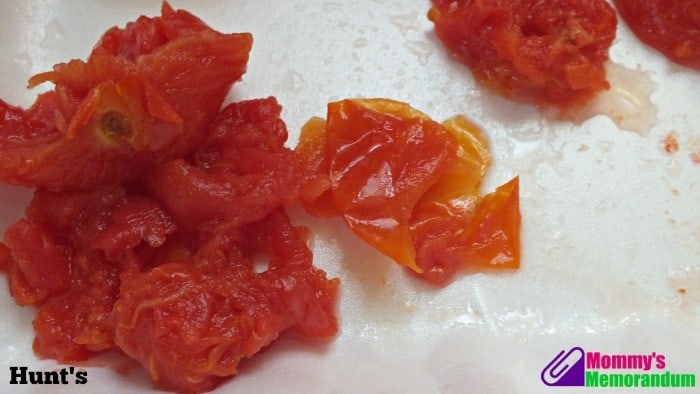 There is a difference that can be seen and tasted between the brands. I’m glad we choose the Tuttorosso Difference.

Here is my score sheet for the comparison between Tuttorosso and Hunt’s. 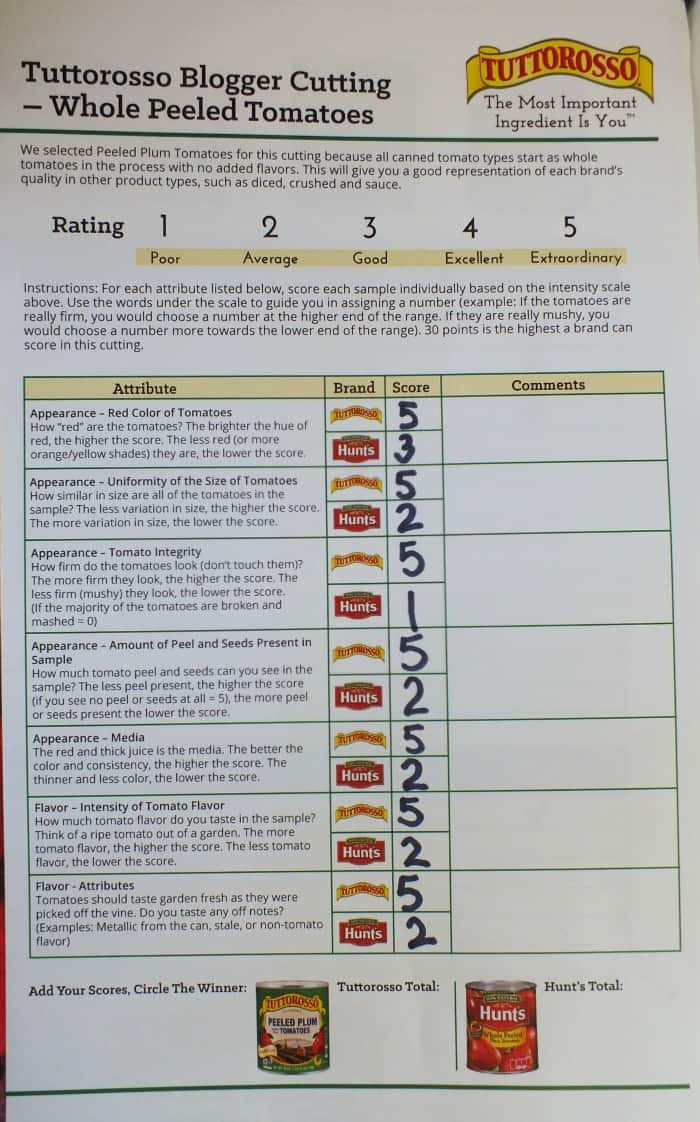 The color of the Tuttorosso tomatoes is a deep, dark red. It resembles more the tomato I would pick from my garden. The Hunt’s tomatoes were a MUCH lighter red, bordering orange/yellow.

The uniformity of the Tuttorosso tomatoes was all similar in size and shape. The Hunt’s was a mod-podge of big and little tomatoes.

Hunt’s was almost half the can when it came to the amount of peel and seeds present. You could see the seeds, and some of the tomatoes had more than one-half of their peel still attached. The Tuttoross0 tomatoes had no peels, and if any seeds were present, we did not see them.

The juice on the Tuttoross0 Tomatoes reminded me of my grandma’s canned tomato juice. It was a deep red and thick. It had immense flavor. The Hunt’s tomatoes were more like water, and I could see separating the juice and water.

As for the taste, Tuttorosso won hands down. The flavors were more like vine-picked. The Hunt’s tomatoes had a metallic taste, lacking the flavor.

We use Tuttorosso Tomatoes for my Minestrone Recipe and my Authentic Italian Sauce. I consider them to be the secret of the complex flavors and beautiful color of these finished dishes.

I encourage you to take the Tuttorosso Challenge with your favorite brand of tomatoes. After all, the best recipes start with the best ingredients.

I received the items to participate in the Tuttorosso Challenge as a Tuttorosso Tomatoes Ambassador. The opinions and photos expressed in this post are 100% my own.

The Website uses Mediavine to manage all third-party advertising on the Website. Mediavine serves content and advertisements when you visit the Website, which may use cookies. Mediavine may collect IP addresses and location to serve personalized ads.  If you would like more information about this practice and to know your choices to opt-in or opt-out of this data collection, please visit http://www.networkadvertising.org/managing/opt_out.asp.
Necessary Always Enabled
Necessary cookies are absolutely essential for the website to function properly. This category only includes cookies that ensures basic functionalities and security features of the website. These cookies do not store any personal information.
Non-necessary
Any cookies that may not be particularly necessary for the website to function and is used specifically to collect user personal data via analytics, ads, other embedded contents are termed as non-necessary cookies. It is mandatory to procure user consent prior to running these cookies on your website.
SAVE & ACCEPT
2 shares
error: Content is protected !!