These Chocolate Peanut Butter Cheerios Bars are a great anytime snack. They use the brand that played a big part of my childhood Cheerios.

We hate a lot of Cheerios growing up. The brand was introduced on May 1, 1941, as CheeriOats, but the name was changed to Cheerios in 1945, the year my dad was born.

In 2015, Cheerios celebrated its 75th birthday. I like a brand that’s been around awhile. 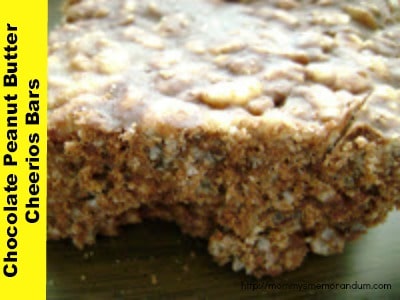 In a large pan heat syrup, sugar, and salt to boiling.

Stir in peanut butter, remove from heat and add vanilla.

Pour over Cheerios and chocolate chips.

The Website uses Mediavine to manage all third-party advertising on the Website. Mediavine serves content and advertisements when you visit the Website, which may use cookies. Mediavine may collect IP addresses and location to serve personalized ads.  If you would like more information about this practice and to know your choices to opt-in or opt-out of this data collection, please visit http://www.networkadvertising.org/managing/opt_out.asp.
Necessary Always Enabled
Necessary cookies are absolutely essential for the website to function properly. This category only includes cookies that ensures basic functionalities and security features of the website. These cookies do not store any personal information.
Non-necessary
Any cookies that may not be particularly necessary for the website to function and is used specifically to collect user personal data via analytics, ads, other embedded contents are termed as non-necessary cookies. It is mandatory to procure user consent prior to running these cookies on your website.
SAVE & ACCEPT
22 shares
error: Content is protected !!