10 Medieval Remedies that Would be Laughable Nowadays

You might take the various medical advancements of the 21st century for granted, but you certainly won’t after you learn more about some of the strangest medieval remedies that really existed…

We all worry about our health on a daily basis, right? Thankfully, whether we’re fighting against a nagging headache, or are bed-bound with a common cold, there are countless simple and easily accessible remedies we can rely on to. These are sure to help get us to get back to our normal selves and reduce any delays in treatment.

But, as you’ll probably know, it wasn’t always this way. In the days when medicine was as far away from being standardized as you could possibly imagine, there were countless different treatments normal folk like you and I would rely on when they fell ill. Some of these are certainly more bizarre than others!

The medieval times bore witness to a whole host of strange remedies that we would understandably find laughable these days. In this article, we’ll be taking a close look at them… 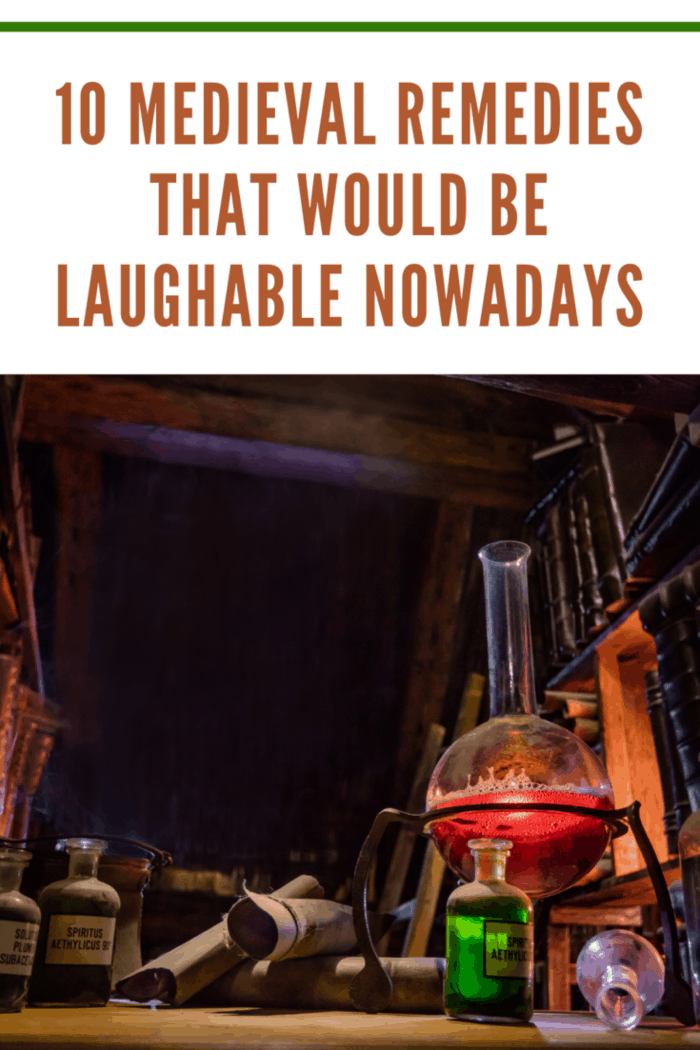 1.    Urine for Spot, Burns, and Everything in Between

Now, I’m not sure which hospitals you’ve been to in the past but, from experience, urine isn’t something you would expect to see as a treatment option. But, in medieval times, urine was often the solution for pretty much any sort of ailment.

Urine was also commonly used by medieval soldiers, who would clean each other’s wounds, believing that its sterilizing properties would be more beneficial than simply using water. Gross.

Even in modern times, animals are used in a medical capacity. Take leeches for example; while they may creep some people out, they can actually prove to be lifesavers as they help to improve blood flow around certain areas of the body.

Snails…not so much. One common medieval remedy was to use live snails to ease burns. Yes really. Research has actually shown that snail slime contains antioxidants, anesthetic, anti-irritant, and collagen – all of which are great properties to help ease a burn.

While, yes, it is laughable to use a live snail, snail slime is used in some capacity in modern times. In fact, ‘snail gel’ is used for skin preparations and for treating minor injuries.

Gout can be an absolute nightmare to deal with, so it’s understandable why people in the medieval ages were looking for some unique solutions. But it’s unclear how they came to this conclusion…

To treat gout, it’s been found that owls (yes, owls) were plucked open, cleaned, salted and into an oven. The presumably very dead owl was then pounded with boar’s grease and placed on the area of gout.

Clearly, this raises a number of important questions, the most important one being: how did they even go about catching owls in the first place?

How do you treat a migraine? Some paracetamol? A lie down with a cold flannel? Wearing a dead animal on your head? Okay, so, maybe not the last one.

A medieval remedy for treating a migraine was to strap dead animals, such as a mole or crocodile, onto your head. You can probably make an educated guess as to why this remedy didn’t catch on.

Dung was a favorite ingredient among medieval physicians and was used for a wide range of different illnesses, including lung problems and sore throats.

As unappealing as it might sound, dung was frequently celebrated for its healing properties and – even if it probably led to a range of other infections – research has shown that the microflora found in certain types of animal dung contains antibiotic substances. Maybe they were on to something?

No, this isn’t some sort of convoluted capitalistic metaphor. Literal fat cats were a creative method of treating sore throats, as bizarre as that might seem.

It was advised that a fat cat should be flayed, and its guts removed, then combined with the fat of a bear and all manner of flora. Disgusting, yet oddly interesting.

Once someone has passed away, their body can still be of medical use – think organ donors and blood transfusions. But, in medieval times, that was taken to another level altogether.

For instance, someone’s powdered skull was often a remedy for common headaches, and powdered bones used for arthritis. The Romans took it one step further, drinking the blood and eating the organs of recently deceased soldiers in the hope that their spirit would be transferred.

Styes are annoying little things, aren’t they? Thankfully they can be treated pretty easily with some saltwater and, if needed, some antibiotics these days.

The idea of drinking dragon’s blood might seem a little Game of Thrones, but it’s not as far-fetched as you might think.

Unfortunately, the dragon’s blood which was used to help treat stomach problems didn’t come from the fictional, fire-breathing variety. Instead, it’s probably bright red resin from a Dracaena draco tree.

These days, doctors don’t tend to rely on the movement of the planets when they’re making decisions regarding the sort of treatment they should prove their patients. That said, this was often the case in medieval times.

Doctors paid close attention to the signs of the zodiac to determine the specific time they should treat certain ailments – based on the Zodiac Man image. Needless to say, this wasn’t exactly the most productive approach…

Are There Any Other Laughable Medieval Remedies You Can Think of?

And there we have it! Thankfully, medicine has come on a very long way since these long-gone times. So, we won’t have to worry about wearing a mole on our heads while we drink dragon’s blood any time soon.

Did any of the medieval remedies surprise you? Are there any more examples you can think of? Feel free to leave a comment below with your suggestions!

Please be advised that this article is for general informational purposes only, and should not be used as a substitute for advice from a trained medical professional. Be sure to consult a medical professional or healthcare provider if you’re seeking medical advice, diagnoses, or treatment. We are not liable for risks or issues associated with using or acting upon the information on this site.