You know those mush Mother’s Day projects your kiddos bring home from school?

The ones so plastered with paint the paper resemble cardboard?

Crayola scribbled across the top declaring, “My Mom Is…”.

I have scrapbooks full of those treasures.

If this were about my first-born, the story would include hearts scratched on paper with markers and Crayola scribbled love notes.

I could probably even dig out my “good stuff” for the occasion—yarn strung with Fruit Loop Gems!

Instead, in honor of Mother’s Day, I’ll be introducing a new “My Mom Is..”, brought to you exclusively by my second born.

How did I earn this masterpiece?

I ruled his world with banishments to his room.

One Friday, after a failed spelling test for the umpteenth time this year, I banished him, as always.

I stood in the doorway of his room.

I stood there looming at his door, as he, with his back to me, ransacked his room.

Anything that was elevated on say, a dresser, was being swiped QUICKLY to the floor.

He was methodical, smashing his belongings in a steady line right down the wall of dressers and desk.

All his worldly belongings crashed to the floor.

Once I had his attention, I softly spoke, “The difference between THAT house (a reference to his cousin’s house three doors down from us, where my son had learned this demolition) “and THIS house, is at this house, I’m not the mom who plays this game.

YOU get to clean up YOUR mess here. ”

That stopped him dead in his destruction!

His face turned pale as he looked around him.

The rest was easy; I simply said “Get to work” and walked away.

After a very long cleaning spree, I walked into his room, still stepping over piles from his aftermath, and looked down to find THIS… 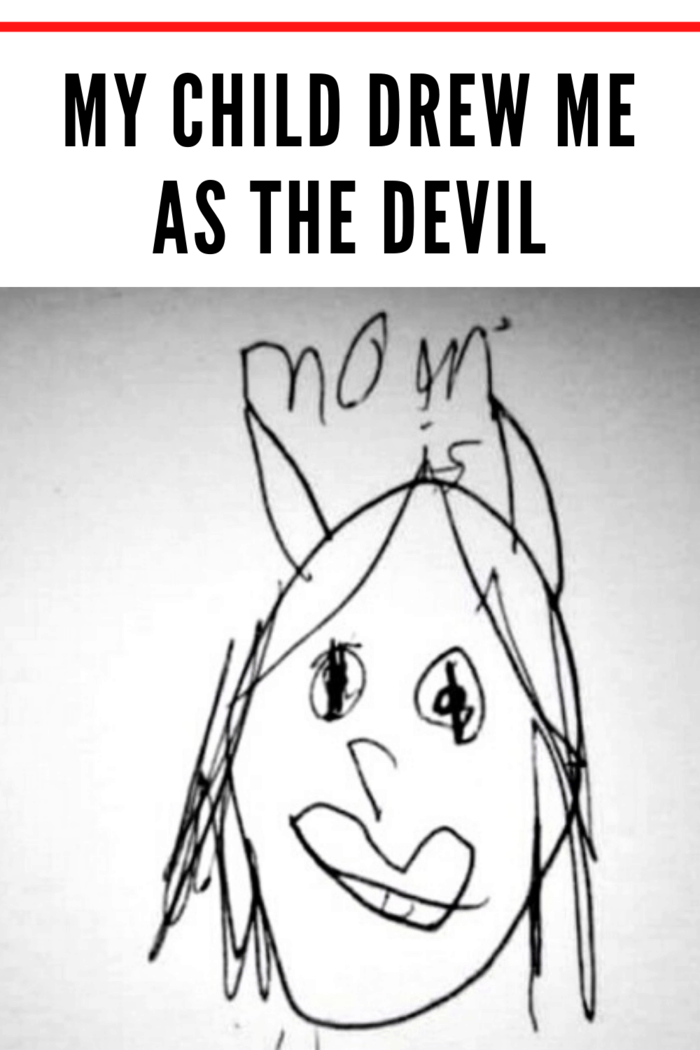 What a keepsake; aye?

In fact, I’m pretty sure I cried.

This kid was GOOD! Darn good!

I knew what I needed to do.

That’s right, I stepped up my game.

A heaping smothering of guilt.

Seriously? How could he do this to me?!

As I sat in my room, most likely crying from my disbelief that my child thought I was the devil, small fingers shoved a folded note under my door. 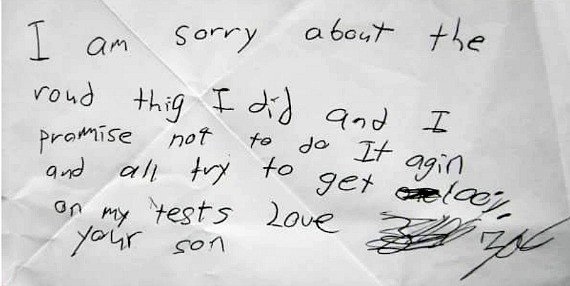 I am sorry about the rude thing I did and I promise not to do it again and I will try to get 100% on my tests.

He usually was the slow one walking home, but not today!

He ran ALL the way home. He bounced through the door with “Guess what, MOM?”

His backpack thudding to the floor as he extended a piece of paper up to me with a Cheshire grin stretched across his face.

Eager to see what the fuss was about, I removed the paper from his hands.

It was right there in red felt tip marker.

He had put forth the effort and scored a perfect spelling test!

His first one of the year!

He is looking at me with his extraordinary green eyes, traced in rows of long, dark lashes, beaming at his accomplishment.

I smiled, then I look at the paper a tad more closely.

“Um, why does YOUR paper have NICK’s name written on it?”

Yeah, that’s right…he had connived his classmate, Nick, into surrendering his perfect test so HE wouldn’t be in trouble.

In a futile attempt, he had erased “Nick” from the upper right-hand corner of the paper and hastily written his own name over Nick’s.

Armageddon had arrived for my child.

Four months later, his punishment still a very vivid memory and his schoolwork more of a priority.

The school would be out in a few weeks and he was still searching for a 100% on a spelling test.

It was spring and the weather was beautiful.

“Mom, Guess what? Nick tried to get me to give him my spelling test.”

He pulled out a paper with his OWN name scribbled across the top, bearing the long sought after 100% branding.

“I’m so proud of you! Why did Nick want your paper?” I inquired.

“He didn’t do well on his spelling.”

“No? What did you tell him?

“Don’t worry, Mom. I told him, “no.” I explained to him that wouldn’t want him to get into trouble. I told him I know what that’s like.”

The kid who helped my child was cast out and left hung to dry in his moment of need, by my son.

Sometimes, motherhood is a tough gig.

Trust me, I know.

I have a picture, as proof, from my child that his mom is the Devil.