If you’re a cat owner, you’re probably no stranger to how mysterious cat behavior can be.

Just when you think your cat is looking for attention, they turn their back on you!

The same applies to the health of your feline friend.

They are very good at hiding illnesses, and even tend to hide when they aren’t feeling well.

So with this in mind, how is it possible to stay on top of your cat’s well-being and be 100% sure they are in good health?

Here are some of the top symptoms to look out for in common cat illnesses. 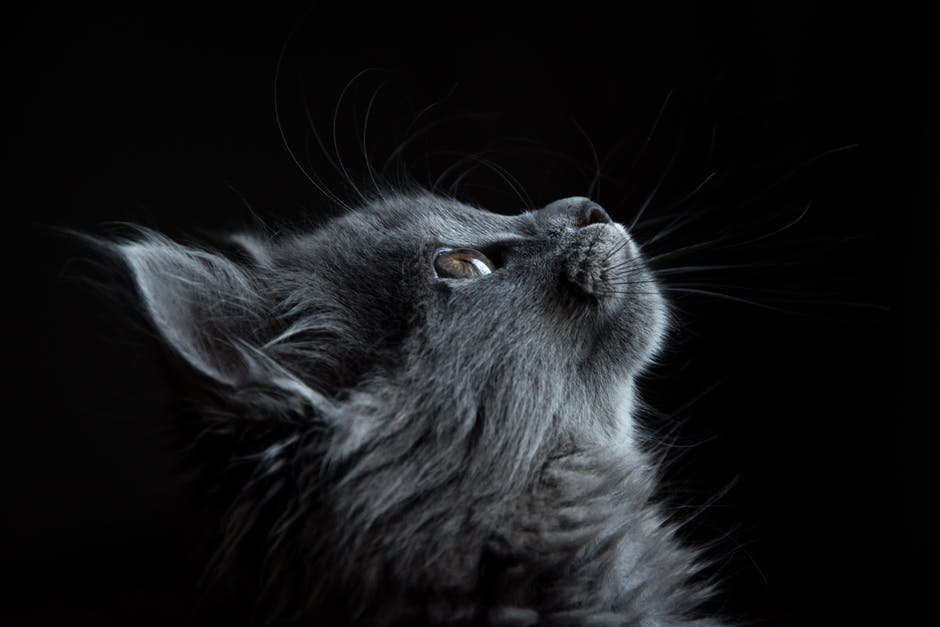 10 of the Most Common Cat Illnesses

Here are 10 of the most common feline diseases and infections that your cat could be prone to:

While some symptoms vary for the above cat illnesses, a common few to look out for could point to something wrong with your feline friend.

We’ll cover those next. 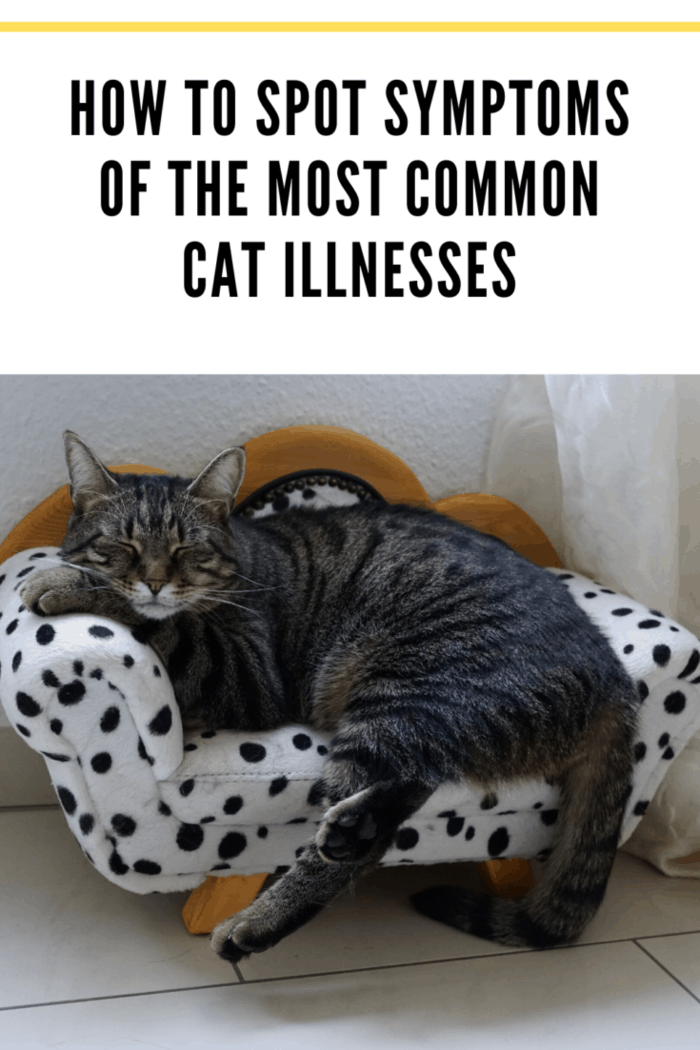 Common Symptoms to Watch For

Even if your cat is an indoor pet and hardly ever ventures outside, they are still susceptible to disease and infection.

If you hardly ever see your cat, except at mealtimes, perhaps, then you should be especially vigilant of their health.

Watch for these signs:

1. A Change in Behavior

Cats can be strange at the best of times, but you’ll most likely know what to expect from their regular habits if you know your cat well.

As soon as you notice something different about their behavior, this could be a sign something is up. (Humane Society)

Typical behavior which points to illness is hiding away in a quiet spot in a hunched-over position.

Your cat may also begin to neglect their regular grooming routine.

The same goes for other small pets such as birds, rabbits, and guinea pigs — check out The Unusual Pet Vets for specialized treatment.

If your cat is experiencing breathing trouble, they may avoid lying down on their side or keep their head raised.

Cats with a neurological disorder may become disoriented, confused, and have small seizures.

They may even press their head against furniture or walls for prolonged periods. 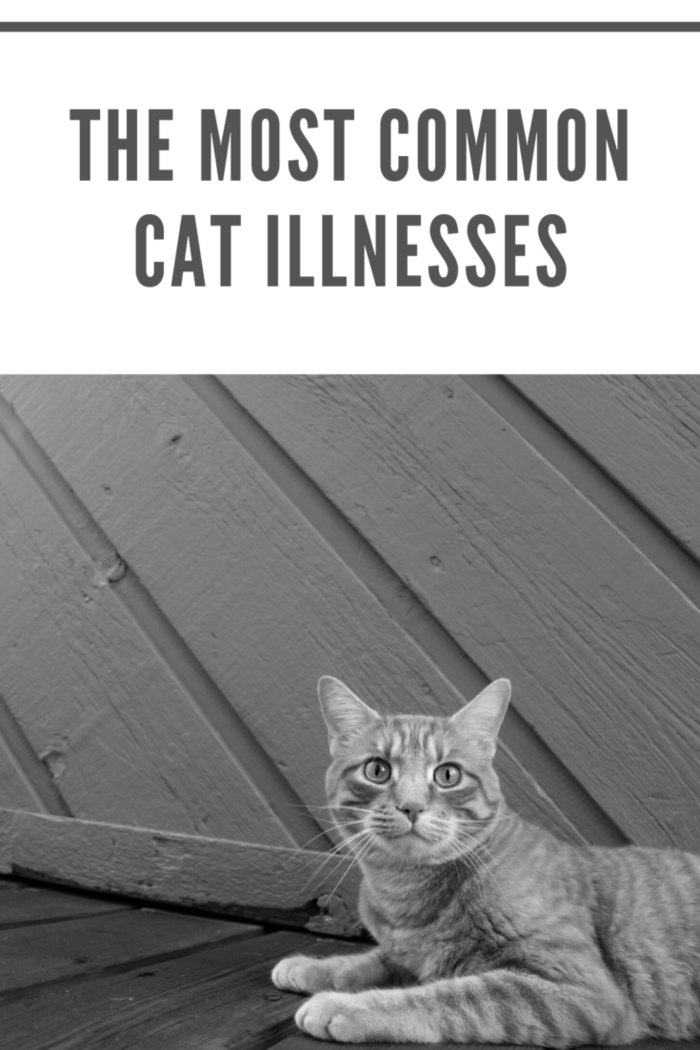 2. A Change in Appetite, Urination, and Defecation

When you notice a change in appetite, whether it’s severely reduced or increased, this could point to a problem.

A reduced appetite is common in cats with most illnesses, but an increased appetite could point to a bigger problem such as kidney disease and diabetes.

If your cat struggles to urinate and attempts to more often than usual, this could point to a urinary tract infection or blockage.

They may also meow or cry out in pain when straining in their litterbox.

This is a common issue in male cats and can be a life-threatening emergency, so make sure they are seen to as soon as possible.

3. Sudden Bouts of Regurgitation and Vomiting

This goes without saying, but if your cat cannot keep their food down after eating, something sinister is going on.

Recurring bouts of regurgitation or vomiting could point to poisoning or some kind of internal blockage.

It could also point to a problem with a worm infestation.

If your feline is vomiting repeatedly for more than a few hours, you’ll need to take them to see a vet right away.

It’s always better to nip the issue sooner rather than later.

4. Sudden Bouts of Diarrhea or Constipation

Cats can be nervous and anxious like the rest of us, which can cause an upset stomach in the form of diarrhea.

A change in diet, type of food, and water intake can also cause bouts of diarrhea.

However, recurring watery diarrhea or contains blood could point to a bigger problem such as intestinal parasites, poisoning, and infection.

Diarrhea accompanied by vomiting is a definite sign that you should visit the vet.

Constipation in cats is fairly common.

They may experience pain while defecating which is characterized by meowing or crying out while in the litterbox.

However, if constipation is prolonged, this is not normal and you should visit the vet ASAP. 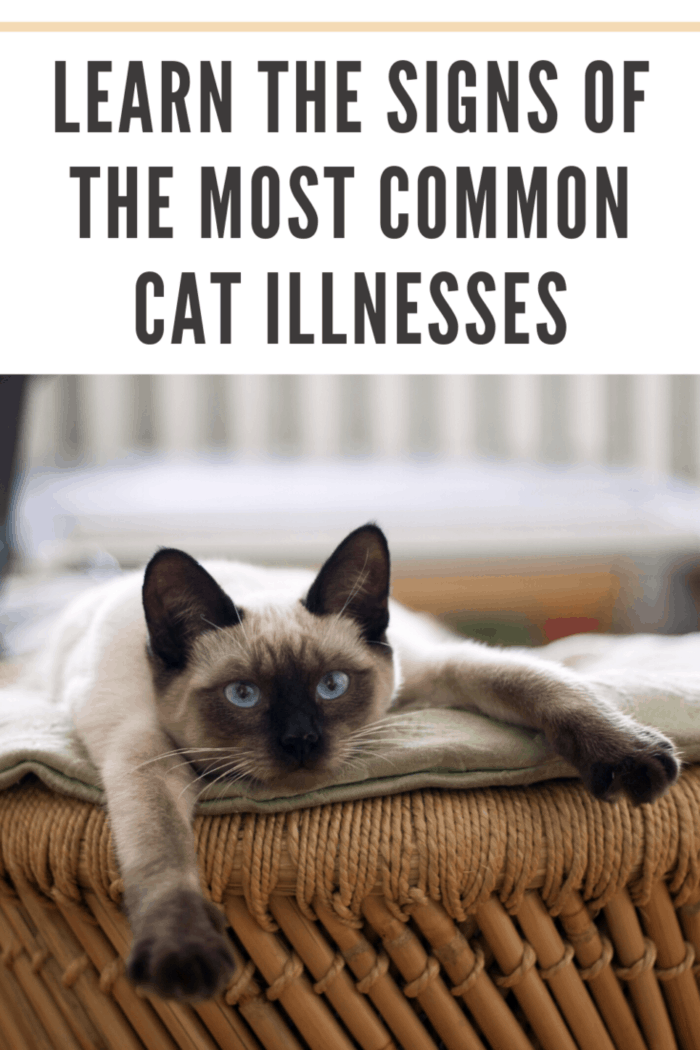 Cat coughing is not that unusual and is caused by a number of factors, but mainly hairballs and allergies.

But if your cat is coughing in uncontrolled fits, far more than usual, it’s wise to take them to the vet.

If you suspect an issue with your cat’s health, one of the best places to look for symptoms is their gums.

They should be a healthy deep pink color.

And if you press down lightly with your thumb, they should return to their normal color quickly.

Gums that are very pale in color or slow to re-pink may point to health issues such as anemia, poor circulation, and even shock.

Blue-tinted gums and tongues point to an even bigger issue such as a lack of oxygen.

Also, be sure to look out for overly red gums, which could mean your cat has a high temperature or some form of poisoning.

Yellow gums usually point to a bout of cat jaundice.

Red-spotted gums are a sign that your cat could have a blood-clotting problem, too.

If they have bad breath, pain, and redness at the gum line, this signals gum disease.

Overall, your cat’s gums are a great indicator of their overall health, so when in doubt, do a gum check!

Stay On Top of Your Pet’s Health

Bear in mind that cat illnesses don’t always signal that the “end is near.”

Cats get sick just like the rest of us, but it’s important to keep a close on them as prevention is always better than cure!

If you’re the owner of more than one pet, stay abreast of their health by checking out the rest of our website for more tips on pet health!

The Website uses Mediavine to manage all third-party advertising on the Website. Mediavine serves content and advertisements when you visit the Website, which may use cookies. Mediavine may collect IP addresses and location to serve personalized ads.  If you would like more information about this practice and to know your choices to opt-in or opt-out of this data collection, please visit http://www.networkadvertising.org/managing/opt_out.asp.
Necessary Always Enabled
Necessary cookies are absolutely essential for the website to function properly. This category only includes cookies that ensures basic functionalities and security features of the website. These cookies do not store any personal information.
Non-necessary
Any cookies that may not be particularly necessary for the website to function and is used specifically to collect user personal data via analytics, ads, other embedded contents are termed as non-necessary cookies. It is mandatory to procure user consent prior to running these cookies on your website.
SAVE & ACCEPT
10 shares
error: Content is protected !!