From the time we left Salt Lake City, one destination was at the forefront of our children’s minds, Bear Country USA.

The chatter in the back seat when we announced, “Today, we are going to Bear Country USA” was in full force. 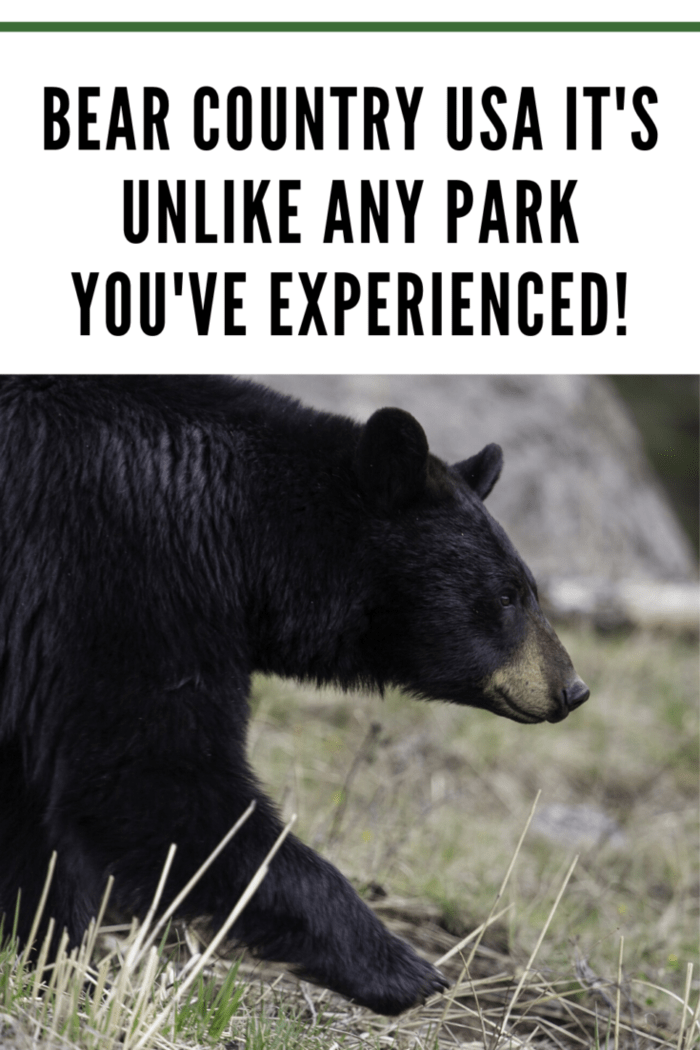 Entering the Black Hills we had talked about the various wildlife we would love to see, deer, moose, and bear topped the wish list from the little adventurers.

What they didn’t expect was that within 3 miles they would see it all, plus more–up close, without leaving the car.

There were shouts from the back seat when the sign came into view. 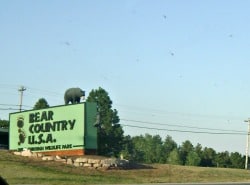 As we pulled into the lane to enter the drive through wildlife park the kiddos had already spotted several elk on the hillside.

They immediately identified them as babies and do and were asking question after question of what else was inside. 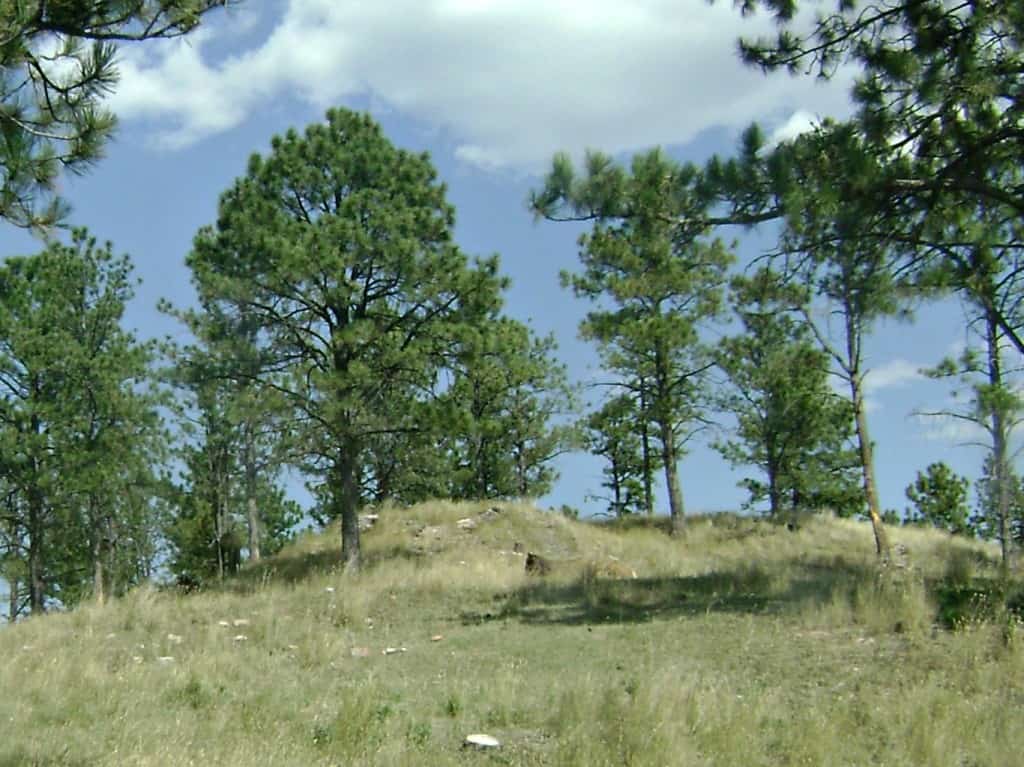 Do you see the elk?

We went over the guidelines of staying inside the car and keeping the windows up with the children.

They were snapping pictures and squealing over the elk on the hill.

Then we followed the road around the bend and discovered the male elk resting against a fence. 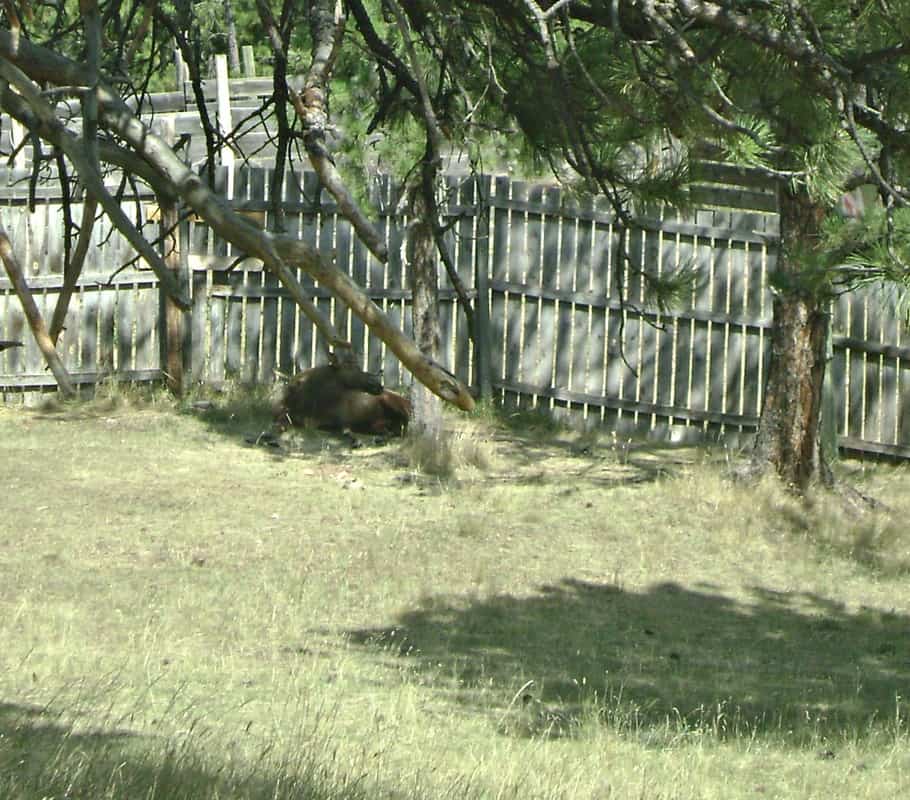 Around another bend in the road, more elk with giant antlers rested as we gazed at them through the car window.

We talked about how the elk were part of the deer family and the kiddos tried to count the points on the antler to give a title of “biggest” to one of the large elks. 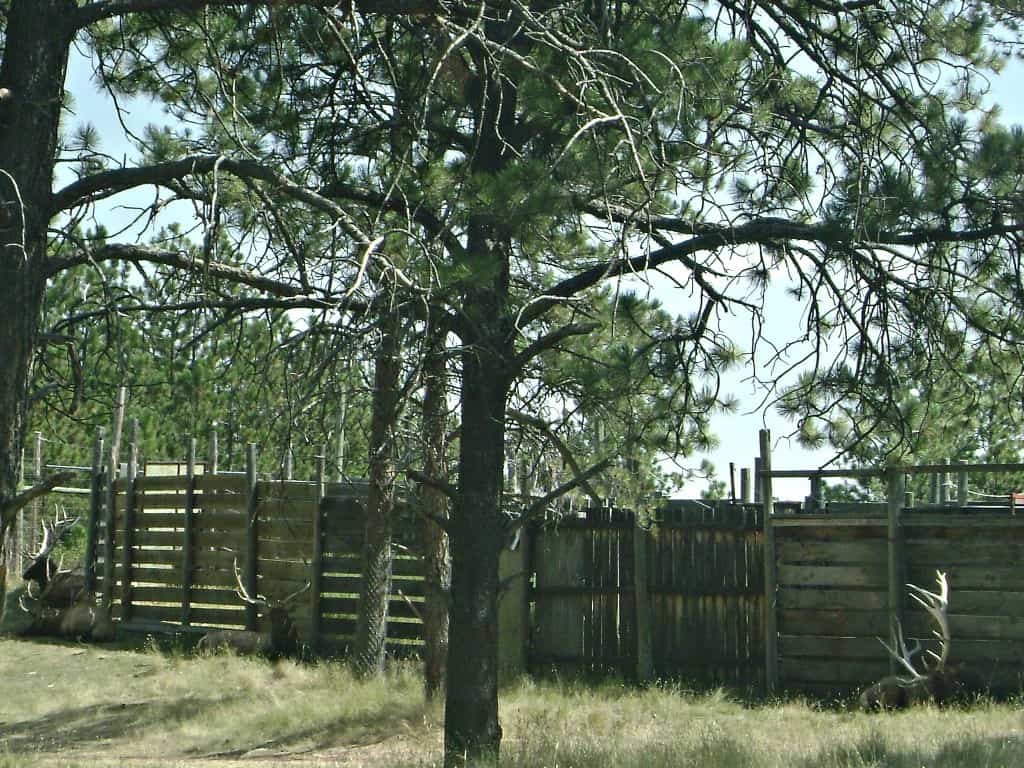 From the elk, we caught a glimpse of reindeer.

When they came into full view Li’l Man exclaimed, “I think this must be Santa’s Summer home!”

We learned how both male and female reindeer have antlers and the kiddos were curious about how furry the antlers looked. 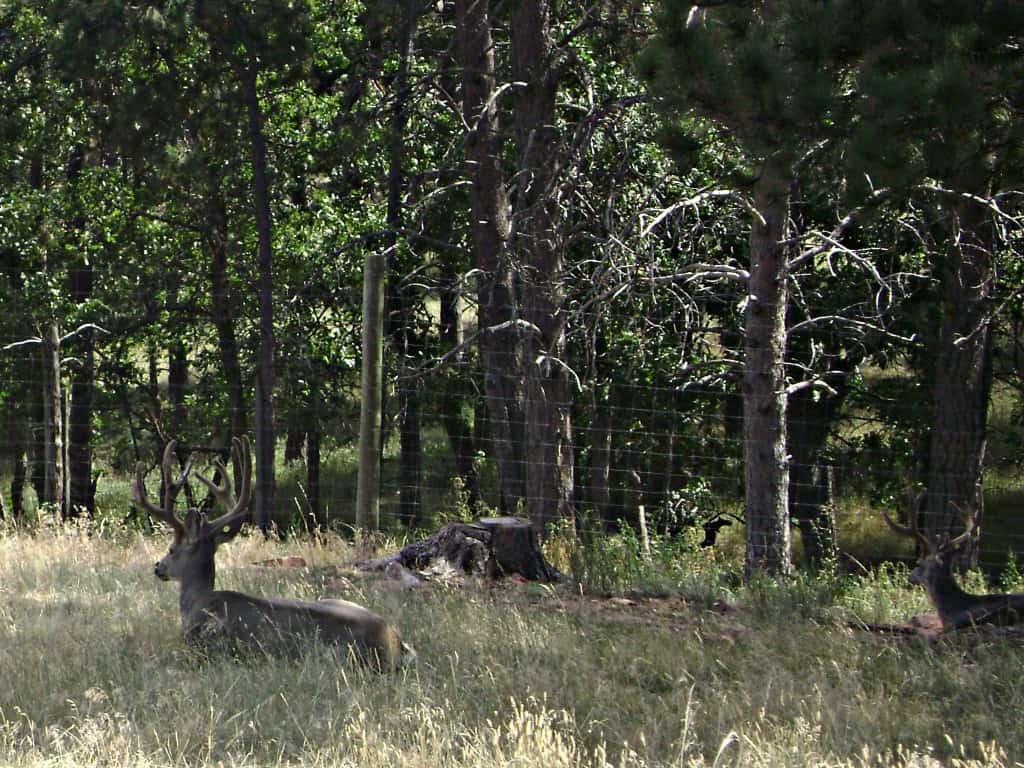 Then the kiddos saw two reindeer playing in a sprinkler.

They giggled and thought how much like the reindeer they are because they wanted to play in the sprinkler too as the reindeer let it spray across the field and then stopped it with his chest, waiting for his fellow reindeer to cross the road and release the trigger! 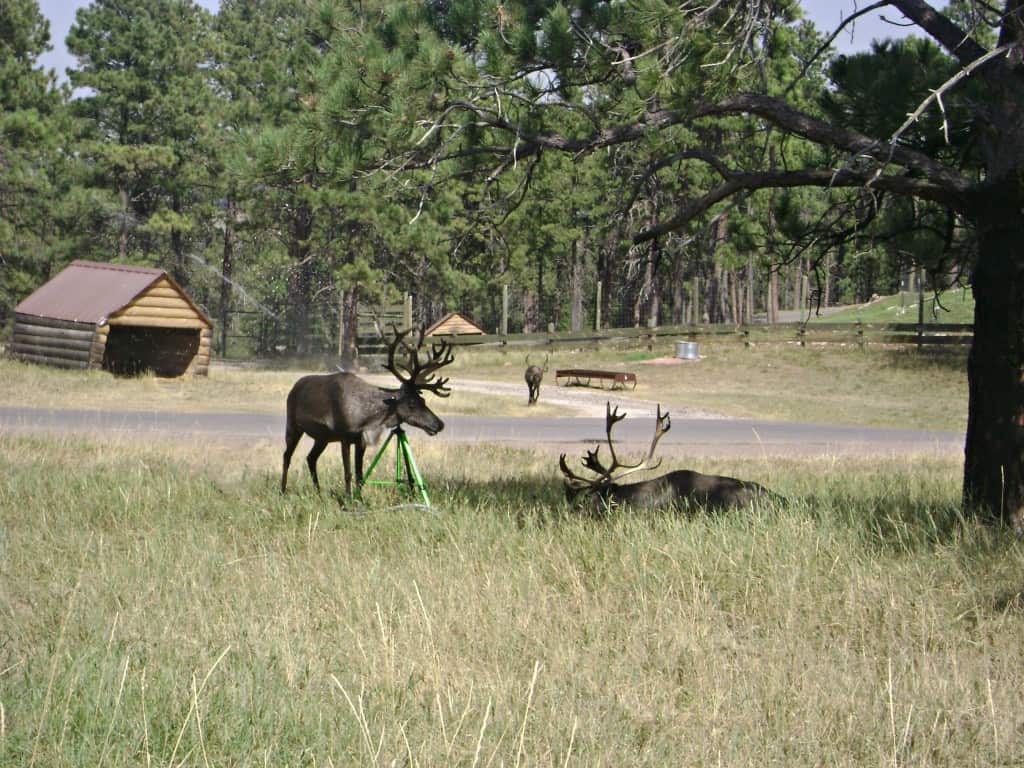 Reindeer playing in a sprinkler at Bear Country USA

The next area promised Arctic Wolves.

Our eyes scanned the hillsides.

We squinted through the tall grass.

It was Dad who spotted him first, the furry pile of fluff resting a distance from the road.

“He looks like a giant dog!” observed The Divine Miss M. 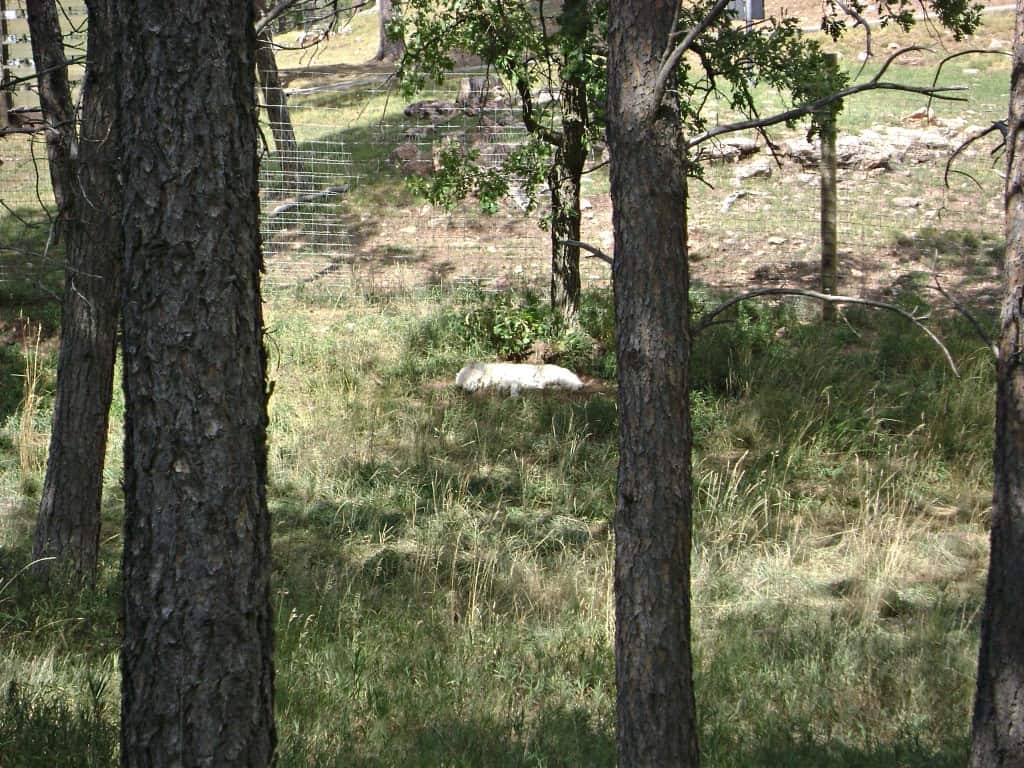 As we drove deeper into Bear Country USA the animals just kept coming we drove through Big Horn Sheep and Rocky Mountain Goats. 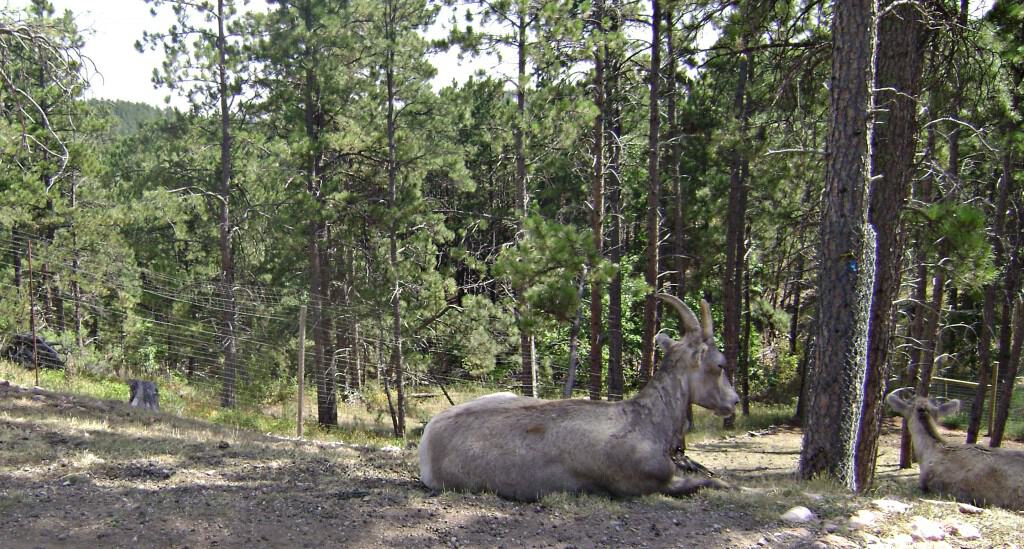 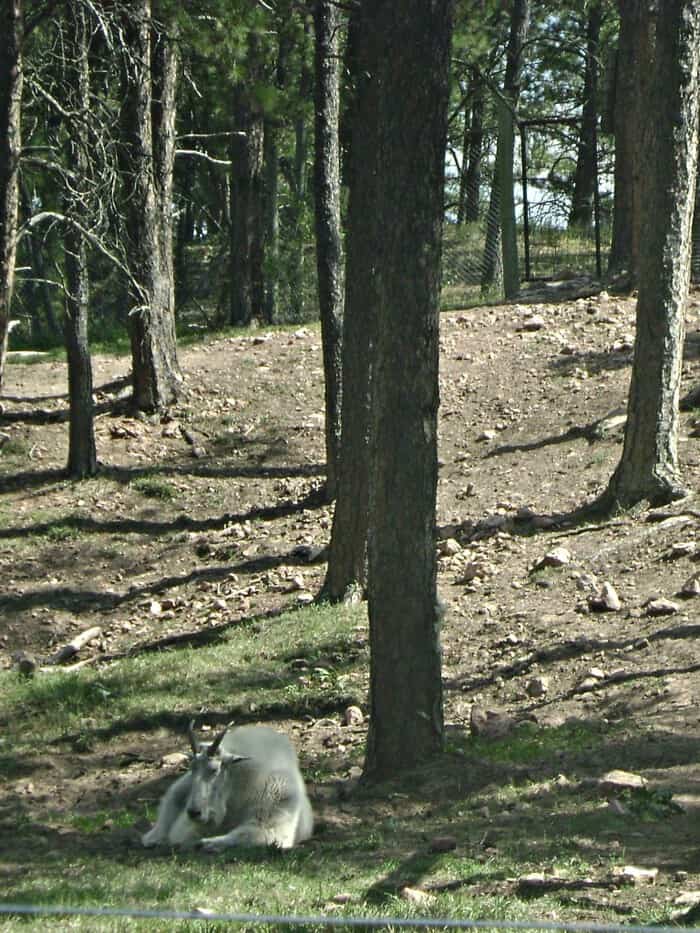 We were truly enchanted.

I shared with my husband that it was incredible that everything on the map we had actually seen, some of it extremely close!

There was no searching a distant hillside to find the animal.

Of course, we had to seek the Arctic Wolf, but he was there–and beautiful!

The children were fascinated by animals they had seen and some they had only heard of in a book or conversation.

We were immersed in the animal kingdom, winding out way over the hills and through the park when someone shouted, “Bear!” 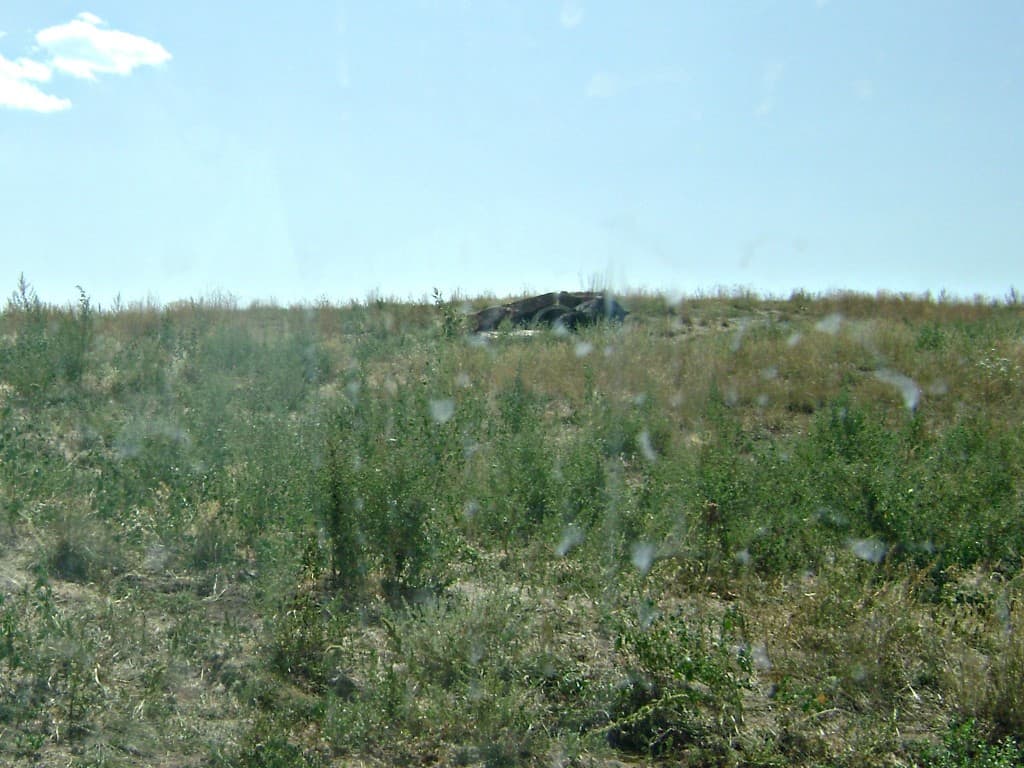 Trust me, in the picture above, the black “mound” is a bear.

It took us some time too.

We squinted and tweaked our heads, but it was indeed a bear.

Then my husband glanced up the road and saw a line of cars.

He’s not one for traffic and so he looked at me, his brows furrowed.

I smiled and then, as the car crept forward we saw this: 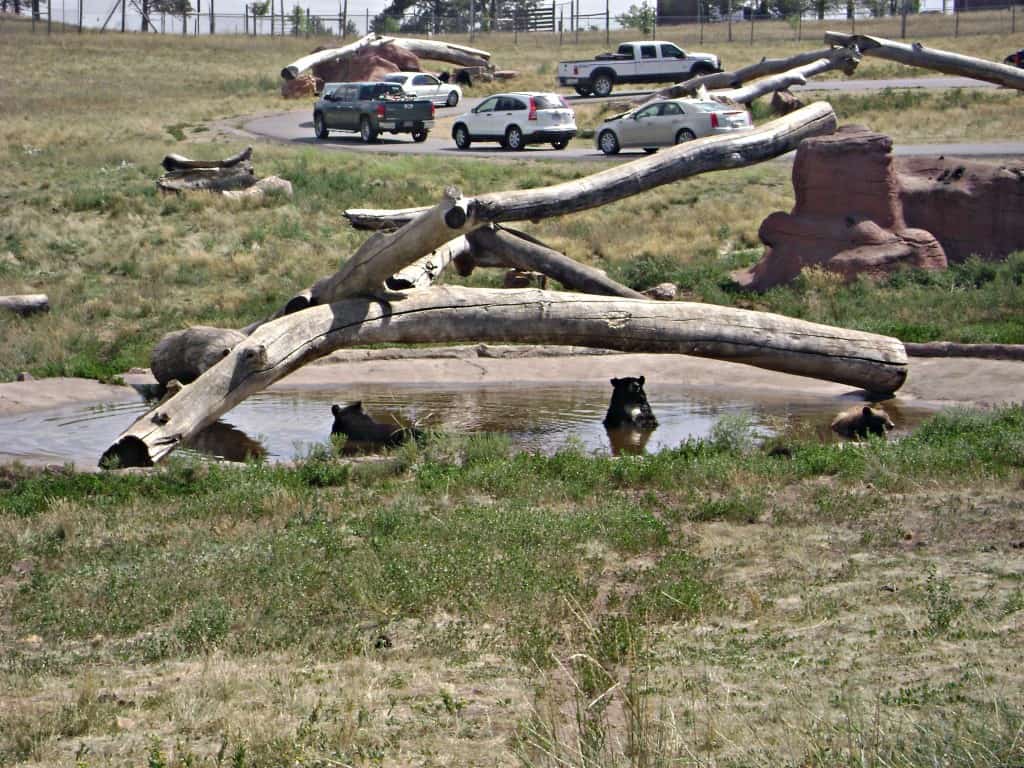 That bear under the log with the white spot on his neck.

He is such a character.

He just sat in the shade of the log and watched the cars.

His tongue would stick out as he bobs a little in the water.

We spent so much time laughing at how diverse each of the bears was under that log.

As far as we could see there were bears.

Bears in hues of brown, shades of black.

Bears with shorter hair and bears with longer hair.

They came and went as they pleased–this one crossed the road right in front of us! 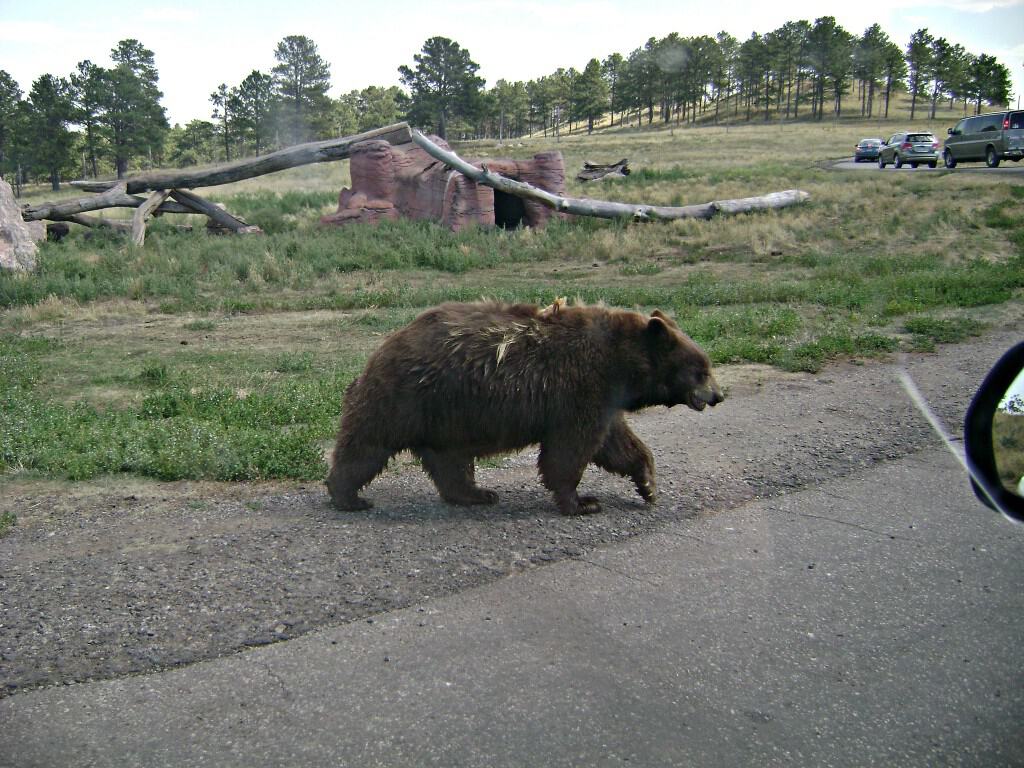 The children watched in sheer excitement as the bear walked from one side of the car, across the road.

They observed how they drop their hind legs in a thundering stomp, shaking the muscles all the way up to the back. They noticed the bear shedding.

They saw a bear up close and it was amazing. 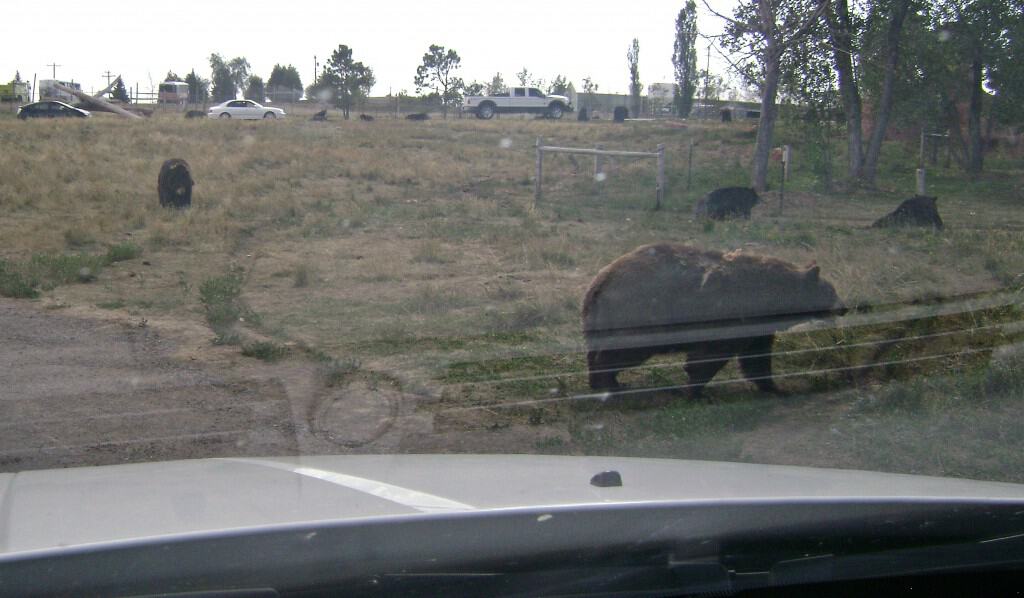 My husband forgot about the cars as we just surrendered to the bear population.

Up close and in the distance bears rested, bears played, bears entertained. 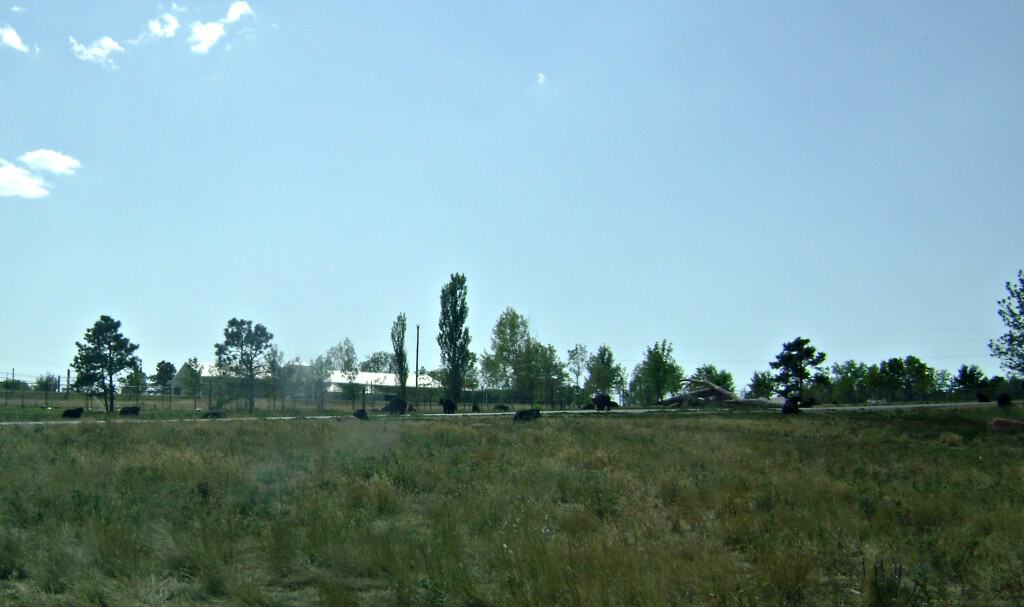 While the bears looked similar, the kiddos began observing their personality.

One bear rested outside a cave.

Someone suggested to the bear that he go “inside the cave where there’s shade”, only to discover as we drove a little further, the cave was occupied and not likely to be surrendered.

The star of the drive was this fellow: 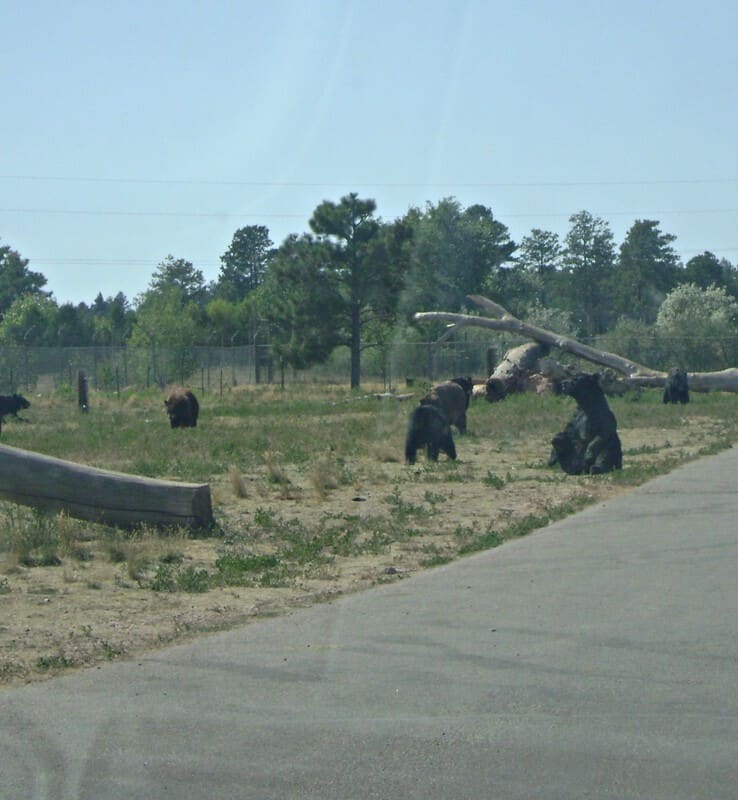 The bear sitting up was a true showman.

He sat for ten minutes, sometimes raising one leg, sometimes glancing towards the road.

He licked his nose with his tongue and gave cause for giggles and guffaws!

The kiddos (and I) absolutely loved him!

Matching his personality, as we pulled the car alongside him for a picture of him sitting, he, instead, decided he preferred to be photographed resting on his belly. 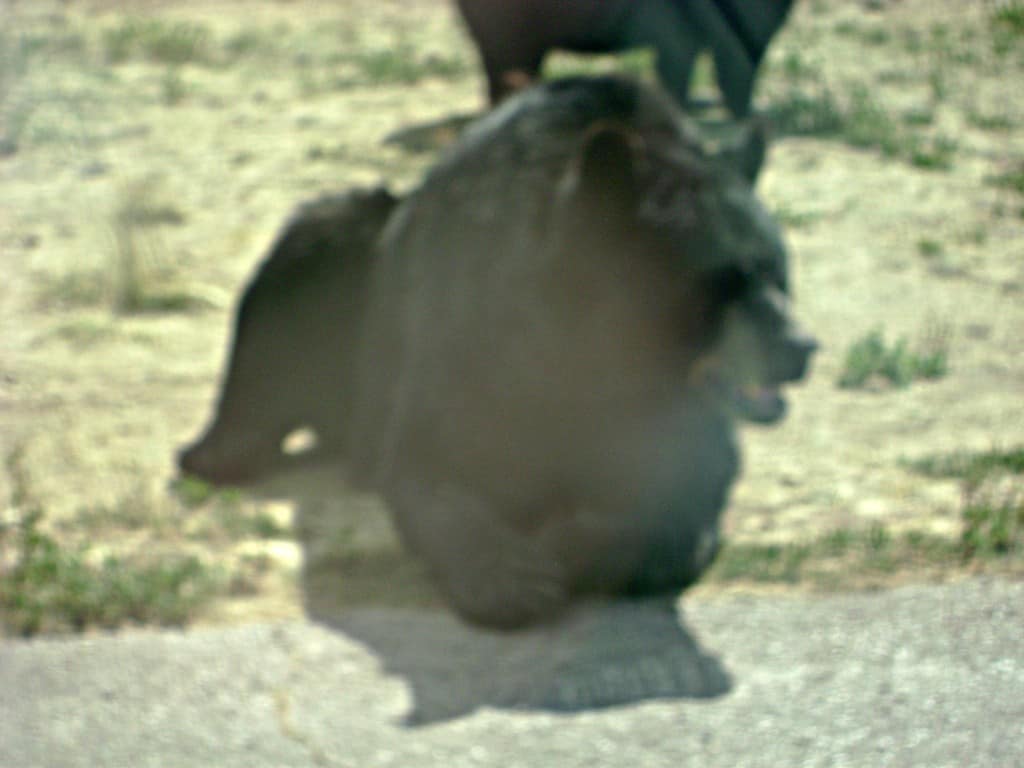 From the bear area, we pulled into a parking lot.

We saw so many animals, but the bears by far were the most impressive by their size, their numbers, and their personality.

We parked the car and walked a short distance into Babyland.

This was the Divine Miss M’s piece of heaven.

Babyland is home to a variety of animals not seen on the tour.

We saw a Badger. 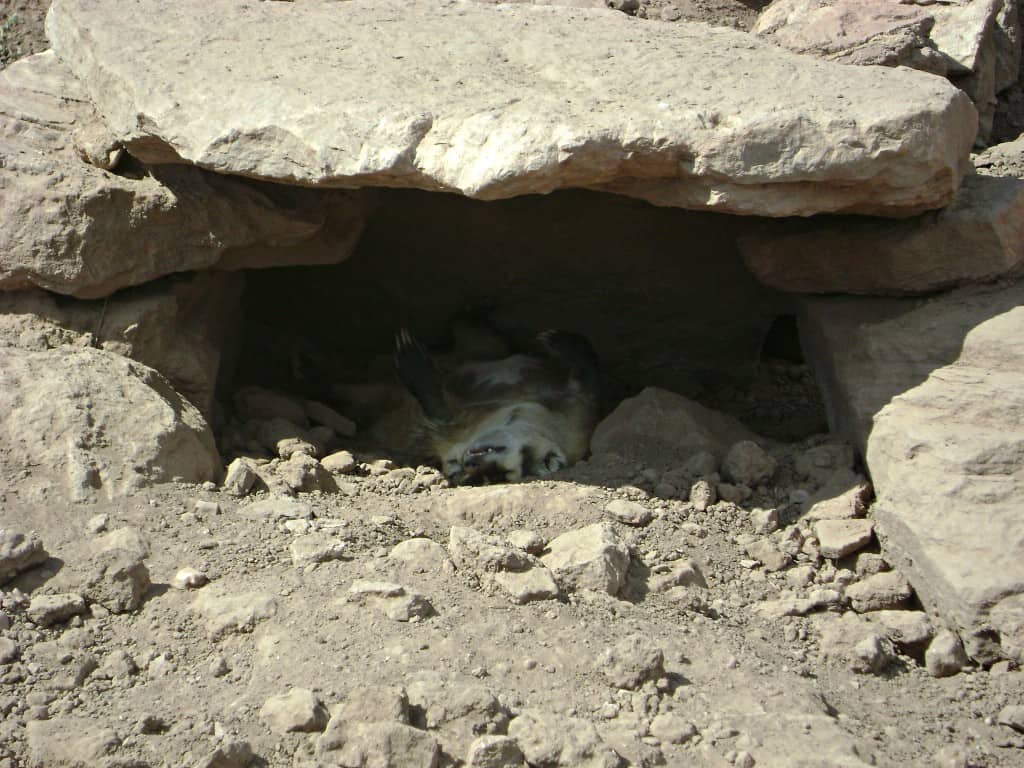 While we were observing the bears from the car, The Divine Miss M noticed in the grass a smaller, black animal.

We initially thought it was a black bear, but it eventually stood up and we saw it to be a Timber Wolf.

From Babyland, we saw Timber Wolves up close. 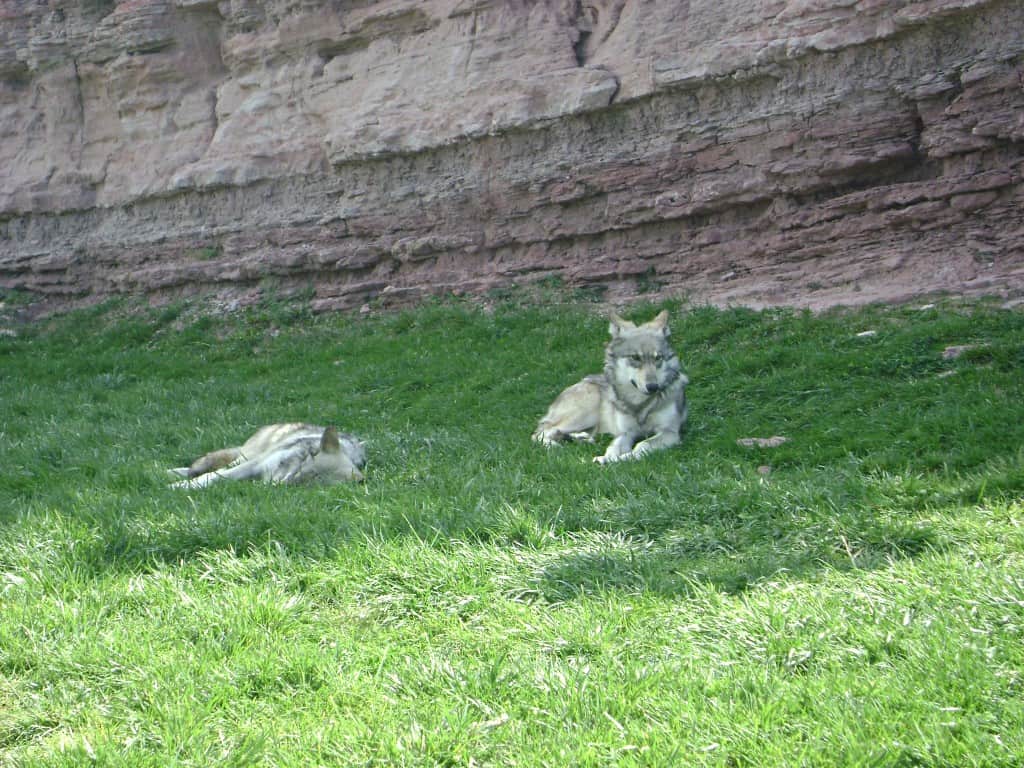 The star attraction was the bear cubs.

They frolicked in the grass. 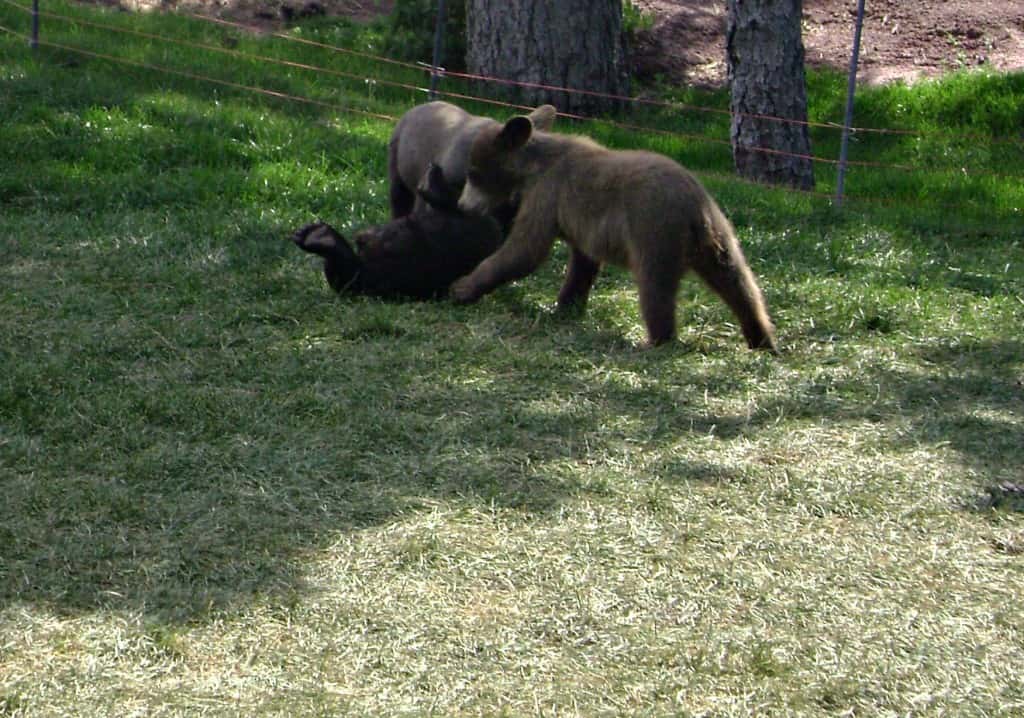 They played on the logs together. 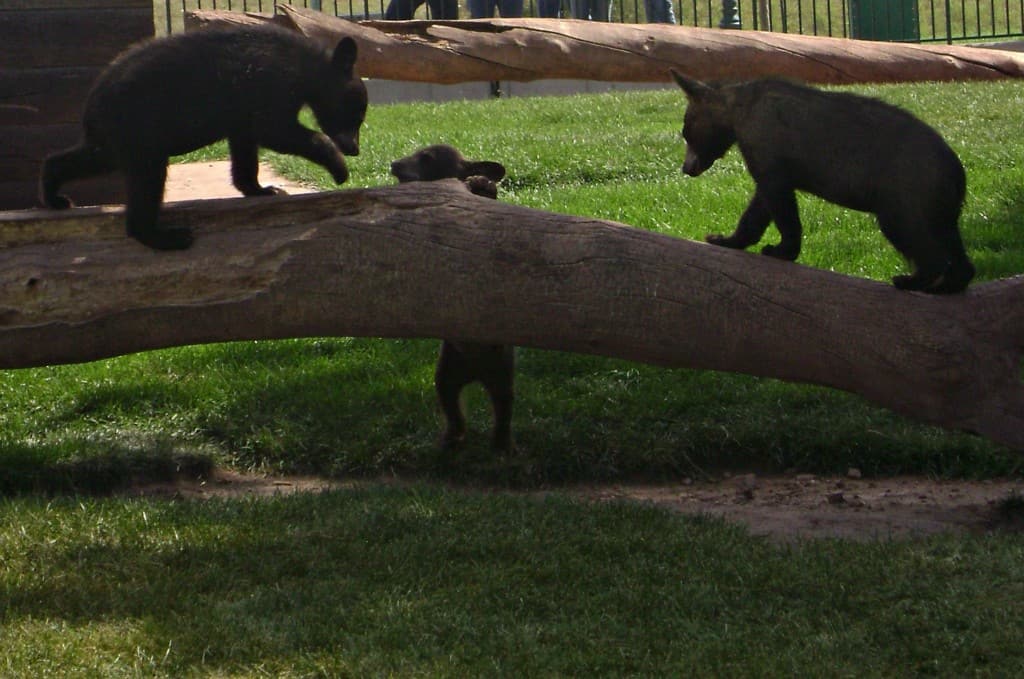 Bear cubs play on a log at Bear Country USA

The bear cubs come so close you could touch them, but we didn’t! 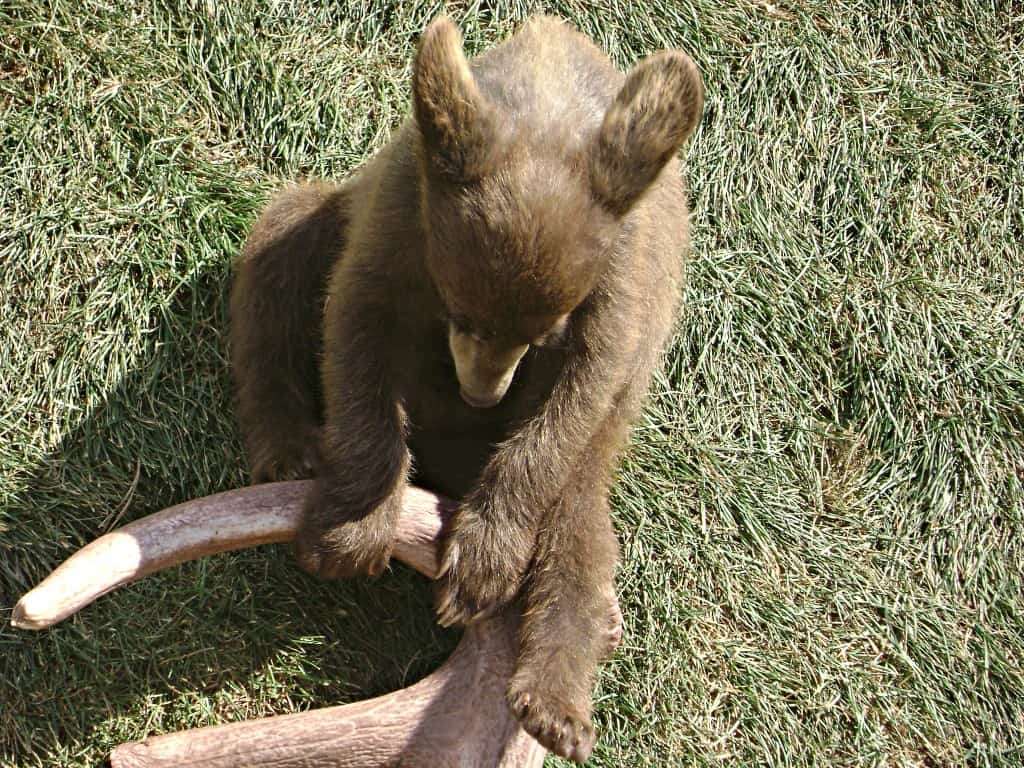 Bear Cub plays with an antler at Bear Country USA

The kiddos were so in love with this bear cub that played with the antler so close to them.

It was magical seeing a baby bear so close–they thought this one acted a lot like our puppy, Bailey Mae. 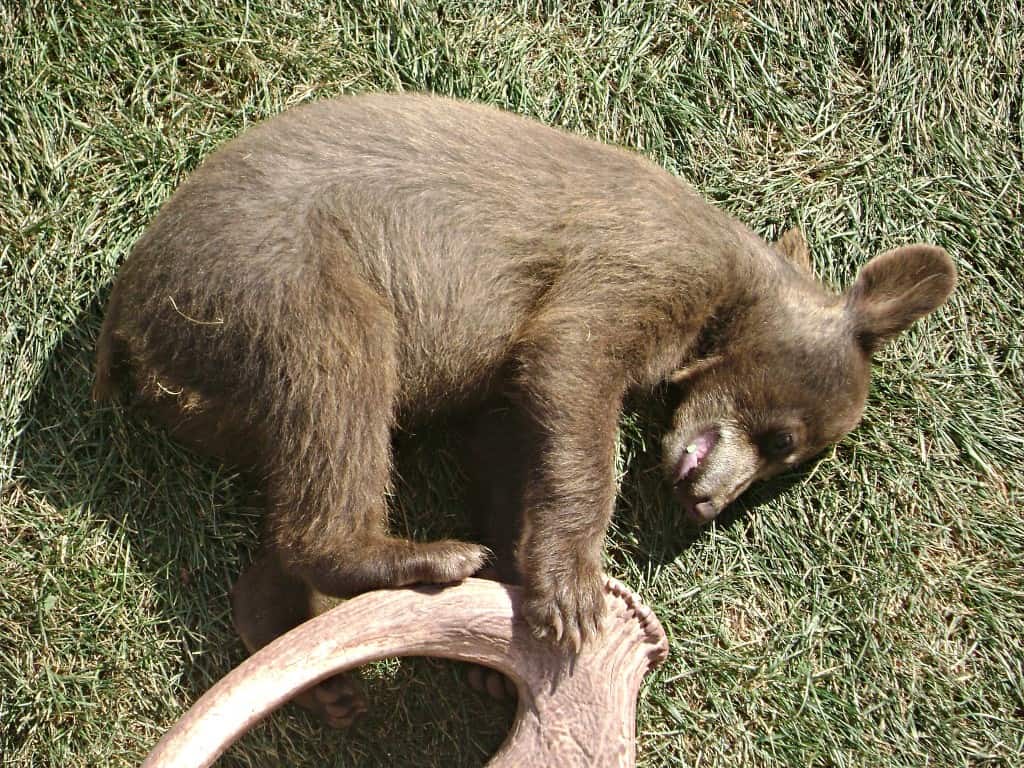 We had taken in a lot a Bear Country USA.

From our cage (the car), winding through the road that gave us a personal glimpse of animals in their environment to the walk through Babyland.

We were about half way through Babyland when the kiddos declared they needed to rest, “for just a minute”. 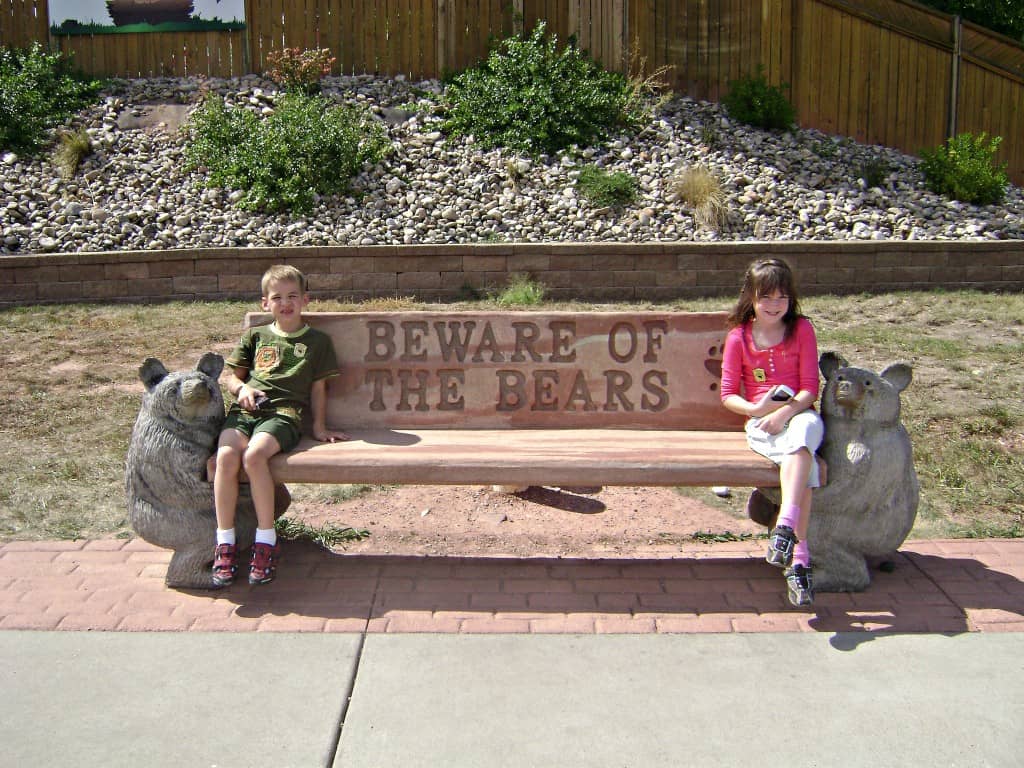 Beware of the Bears bench at Bear Country USA, the kiddos rest.

We watched the baby bears play a little more and then there was a squeal of excitement as The Divine Miss M discovered the baby Arctic Wolves. 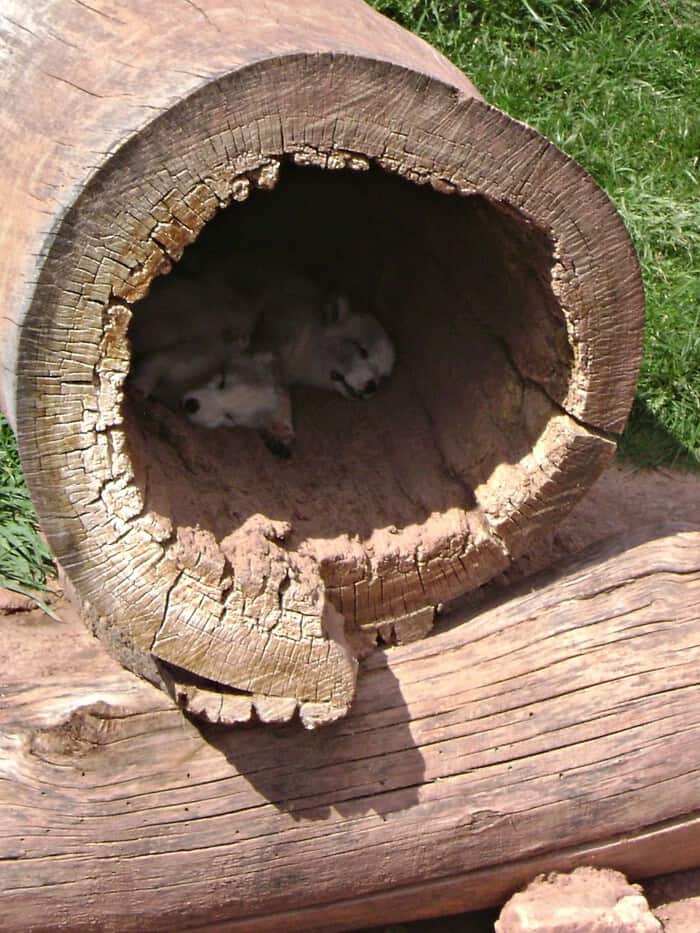 The kiddos were sad when we reached the Bear Waterfall, marking the end of our loop through Babyland. 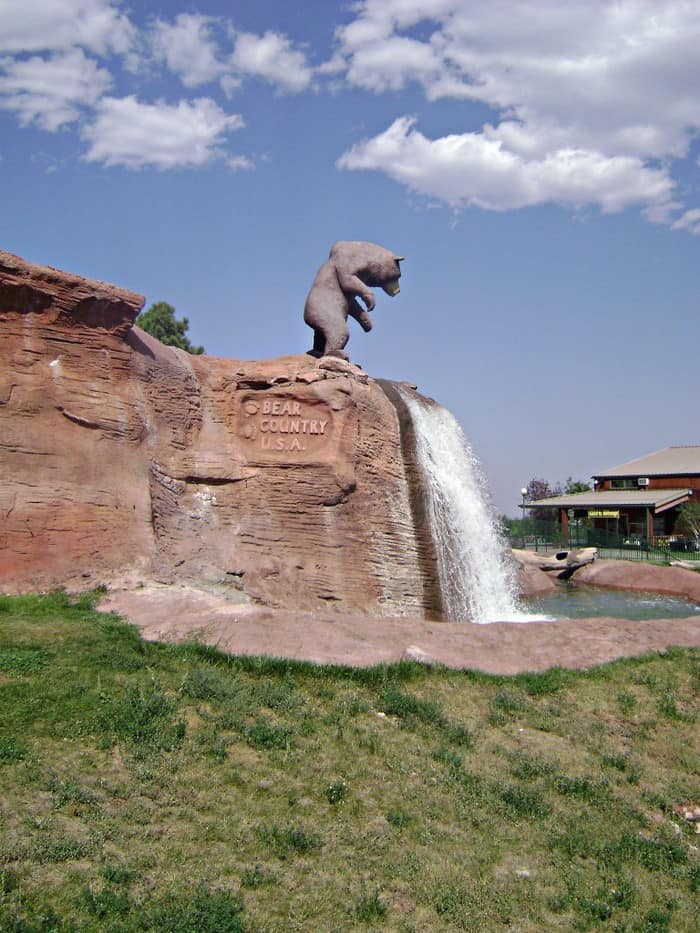 It is the same waterfall the Crocodile Hunter, Steve Irwin, and his daughter Bindi, stood in front of during the visit to Bear Country USA in April of 2006, a few months before his tragic death.

While visiting they filmed the episode, American Beauties, for Bindi’s show, Bindi the Jungle Girl. 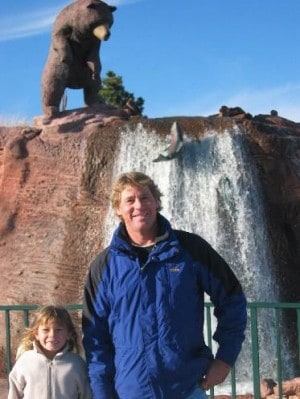 Beneath that waterfall, resides two playful otters who spend their afternoons swimming together. 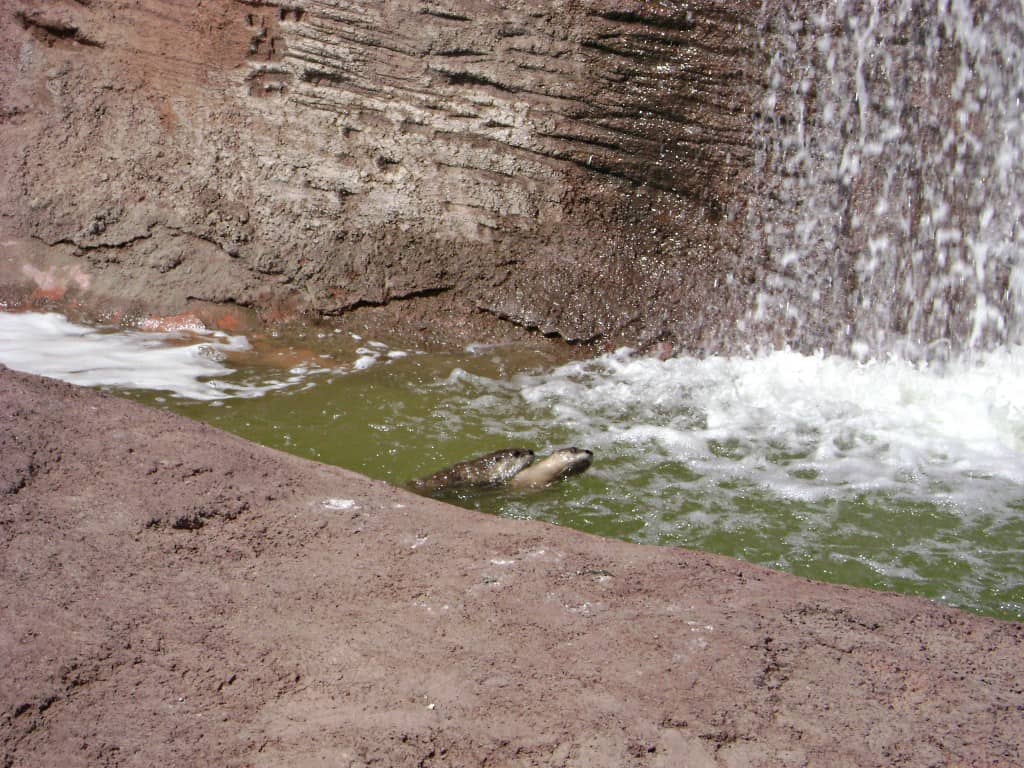 This was absolutely the kiddos most favorite time spent in South Dakota.

These are a few of the pictures we took that day, but truly Bear Country USA captured the hearts of us all as our eyes snapped pictures that appear as we remember our adventure.

Bear Country USA is open May 1 thru November 30.

The peak season is (June, July, and August).

The park opens at 8am and closes at 6pm daily.

During May and September through November, the park hours are 9am to 4pm daily.

The park is open seven days a week during their season, but inclement weather in October and November may close the park.

Plan on spending about an hour and a half enjoying the animals from the car and on the easy walk through Babyland.

It truly is a great place to visit. The bears are the star attraction and Babyland is a must see.

Never has nature been so close!

Disclosure of Material Connection: I received one or more of the products or services mentioned above for free in the hope that I would mention it on my blog. Regardless, I only recommend products or services I use personally and believe will be good for my readers. I am disclosing this in accordance with the Federal Trade Commission’s 16 CFR, Part 255: “Guides Concerning the Use of Endorsements and Testimonials in Advertising.”.

The Website uses Mediavine to manage all third-party advertising on the Website. Mediavine serves content and advertisements when you visit the Website, which may use cookies. Mediavine may collect IP addresses and location to serve personalized ads.  If you would like more information about this practice and to know your choices to opt-in or opt-out of this data collection, please visit http://www.networkadvertising.org/managing/opt_out.asp.
Necessary Always Enabled
Necessary cookies are absolutely essential for the website to function properly. This category only includes cookies that ensures basic functionalities and security features of the website. These cookies do not store any personal information.
Non-necessary
Any cookies that may not be particularly necessary for the website to function and is used specifically to collect user personal data via analytics, ads, other embedded contents are termed as non-necessary cookies. It is mandatory to procure user consent prior to running these cookies on your website.
SAVE & ACCEPT
249 shares
error: Content is protected !!