I received Ada’s Ideas: The Story of Ada Lovelace, the World’s First Computer Programmer by Fiona Robinson in exchange for this post. All opinions are my own.

I love that schools are implementing STEM. I am encouraged by the thought that girls everywhere are getting the message that they can truly be anything. I think back to that #IAmAnEngineer campaign and how far we’ve come.

Somewhere in school, I missed the lesson about Ada Lovelace, the world’s first computer programmer. Thankfully, she is the subject of Fiona Robinson’s new book, Ada’s Ideas, a compelling and stunning portrait of a woman who saw the potential for numbers to make art. 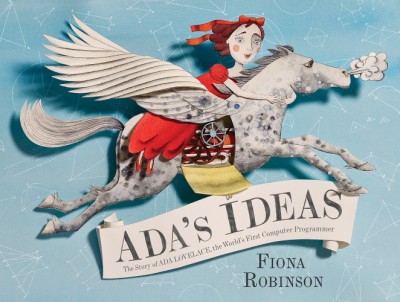 Ada Lovelace (1815-1852) was the daughter of Lord Byron, a poet, and Anna Isabella Milbanke, a mathematician. Her parents separated when she was young, and her mother insisted on a logic-focused education, rejecting Byron’s “mad” love of poetry. But Ada remained fascinated with her father and considered mathematics “poetical science”. Through her friendship with inventor Charles Babbage, she became involved in “programming his Analytical Engine, a precursor to the computer. Her notes on the engine include what is recognized as the first algorithm intended to be carried out by a machine making her the world’s first computer programmer.

Ada’s Ideas is a great book for those interested in STEM, computer programming, girl power reading, or biographies, this beautiful book champions women in the field of math and computers. Ada’s Ideas is the perfect tool to remind women, young and old, that they have the intelligence and perseverance to achieve their dreams.