The construction of the female reproductive system is quite complex, and as a result, many women may suffer from recurring diseases in this area. Some of these infections might be relatively mild and not dangerous, such as vaginal yeast infections, while others threaten the health and even life of a female. One of the most unpleasant diseases in the pelvic area is pelvic inflammatory disease. What causes this disorder, what are its symptoms, and possible treatment options?

What is pelvic inflammatory disease?

Pelvic inflammatory disease, often abbreviated as PID, is an infection in the female pelvic area.

Bacteria cause it, and it is usually transmitted sexually.

The bacteria then move from the vagina to other parts of the reproductive system, such as the uterus or ovaries.

PID might not give any severe symptoms for some time, so that’s why it’s essential to pay attention to even mild pains or infections of the vagina or ovaries.

If not treated, PID can lead to infertility and other disorders.

It is estimated that almost 2% of women in the US suffer or have suffered from this type of infection. 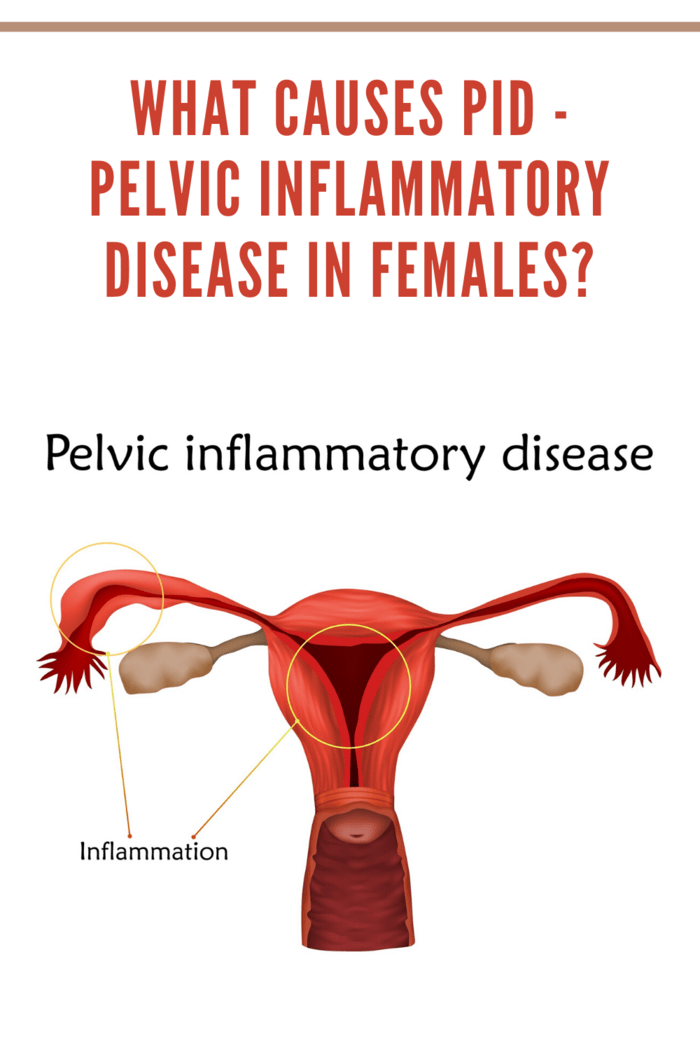 What are the symptoms of PID?

The symptoms of pelvic inflammatory disease may include pains in the lower abdomen or pelvis, abnormal, excessive vaginal discharge or bleeding, pain and discomfort during sexual intercourse, and sometimes even fever.

The signs may also involve urinating difficulties or pain, and general tiredness.

Some symptoms can be unusual and challenging to connect with the urinary tract, including back pains, vomiting, and nausea.

If you suffer from one or more symptoms, visit your doctor immediately to start proper treatment, even if they’re not severe.

The pelvic inflammatory disease may require medical or even surgical treatment.

This is an antibacterial medication that can soothe the symptoms before the doctor’s consultation.

The partner of the infected woman also should consult the doctor to get appropriate medication.

Both partners should refrain from sexual activity until the infection disappears.

It happens that the symptoms go away after a few days of treatment, though it’s advisable to finish it according to the doctor’s instructions.

This kind of bacteria is transmitted sexually.

Sometimes the bacteria can be transmitted through the cervix – this usually happens in the case of immunodeficiency, for example, after childbirth or during antibiotic therapy.

Rarely, the bacteria can get into the pelvis also during medical procedures that involve inserting medical tools into the cervix or vagina.

Bacteria are most commonly transmitted during unprotected sexual intercourse; that’s why it’s vital to take care of one’s own and partner’s sexual health.

As in the case of any disease, certain factors increase the risk of pelvic inflammatory disease.

They include, for example, having unprotected sex (without mechanical protection, e. g. a condom), having multiple sexual partners, or having a history of pelvic diseases and intimate infections.

Douching the vagina regularly also facilitates the infection because it disturbs natural bacterial flora in the vagina.

A small risk of PID has involved the insertion of the intrauterine device – a mechanical birth control method inserted into the uterus.

What complications can PID cause?

When it’s not treated, the pelvic inflammatory disease may have numerous complications.

They include, among others, problems with getting pregnant or even infertility or chronic pelvic pain.

All these diseases need immediate medical intervention as they are life-threatening and usually involve severe pains and bleeding.

How to prevent pelvic inflammatory disease?

Prevention is key when it comes to reproductive organ infections.

First, try to practice safe sex only – make sure that your partner doesn’t have any sexually transmitted diseases, and if you doubt, encourage them to test for STD.

You can also test yourself regularly for this type of infection.

Avoid vaginal douching or using scented creams and washing gels, as they may increase disease risk.

Try to wear clothes made from natural materials and avoid synthetic underwear that doesn’t allow your skin to breathe.

Reproductive system infections are quite a common problem among young and sexually active women.

Therefore, it’s vital to keep track of regular doctor check-ups and pay attention to every abnormal symptom that appears during or after intercourse or urination.

It’s also advisable to take a test if you’re not sure about your sexual health.

The Website uses Mediavine to manage all third-party advertising on the Website. Mediavine serves content and advertisements when you visit the Website, which may use cookies. Mediavine may collect IP addresses and location to serve personalized ads.  If you would like more information about this practice and to know your choices to opt-in or opt-out of this data collection, please visit http://www.networkadvertising.org/managing/opt_out.asp.
Necessary Always Enabled
Necessary cookies are absolutely essential for the website to function properly. This category only includes cookies that ensures basic functionalities and security features of the website. These cookies do not store any personal information.
Non-necessary
Any cookies that may not be particularly necessary for the website to function and is used specifically to collect user personal data via analytics, ads, other embedded contents are termed as non-necessary cookies. It is mandatory to procure user consent prior to running these cookies on your website.
SAVE & ACCEPT
35 shares
error: Content is protected !!