The increased iguana population has caused much damage, such as eating valuable landscape plants, shrubs, trees, fruits, and flowers, devastating Florida’s ecosystem. Moreover, burrows of green iguanas near seawalls have caused erosion and eventual collapse. The extensive tunnels that the green iguanas burrow are also known to damage pavements and building foundations.

Iguanas are cold-blooded animals, which means that their body temperatures are contingent on outside temperatures. Because they are cold-blooded, iguanas often bask in the sun for warmth and energy. As a result, iguana droppings can be found littered across areas where they sunbathe. Aside from the repugnant odor complaints, iguana droppings are also a potential source of salmonella bacteria, a common cause of food poisoning.

Separately, although iguanas are not generally aggressive towards humans, adult iguanas should not be underestimated. Their very sharp claws can cause severe scratch wounds, and their long tails can deliver a powerful slap if they feel threatened. This combination can be particularly dangerous for your pets. So, if you are encountering issues with pesky iguanas, these are a few things that iguanas are scared of that can help you eliminate this invasive species from your home. 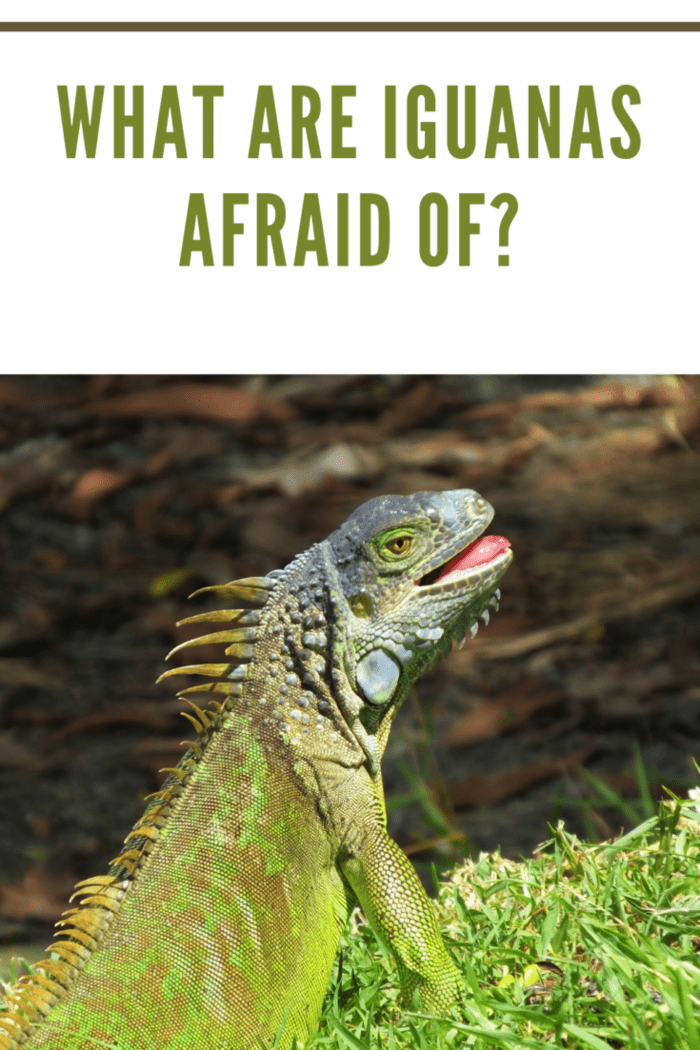 Protect Your Garden From Iguanas

If you feel as though iguanas are constantly lounging on your property, it is likely because your home is an ideal source of shelter or food. Iguanas are herbivores, which means that their diets consist of plants. Specifically, iguanas are folivores, so they typically consume leaves. It is not particularly realistic to remove every living plant from your property, nor should you give up your beautiful garden. Instead, you can protect your plants by using chicken wire or mesh as a fence around your plants. Furthermore, placing chicken wire or mesh 1 foot underground can prevent iguanas from burrowing into the ground, thus accessing the plants. The fence is not only a deterrent but can also scare away a hungry iguana.

Do NOT Leave Food Unattended

Although iguanas are herbivores, they will consume virtually anything. Therefore, it is important NEVER to leave food unattended, whether you are enjoying a backyard picnic or feeding your furry friend on the back porch. As previously mentioned, while iguanas are generally not dangerous to humans, they can cause damage to pets. The last thing you need is an iguana to fight and injure your precious pup for kibble. Iguanas are typically scared of humans. If you decide to enjoy a snack outside, be sure to stay close to your pet.

Iguanas Are Scared of Loud Noises

Iguanas are easily frightened by loud noises. Making a loud noise, such as blasting music off your speaker or banging together pots and pans, can temporarily scare away iguanas. However, constantly playing loud music or clanging together kitchenware is not a long-term solution for eliminating iguanas from your yard. Instead, purchase wind chimes and place them on your property. The wind chimes will continuously create loud sounds, even when you are not there, thus scaring away the iguanas.

If there are iguanas on your property, spraying them with water will scare them away for the time being. Although not a permanent solution, iguana control Florida experts suggest this as a temporary fix. Not only are iguanas afraid of water, but they also dislike the loud sound that gushing water makes.