It’s reported that 3 out of 4 sexually abused children get victimized by someone they know.

Most of the time abuse doesn’t just happen, predators use grooming behavior to gain trust and lure children in gradually.

That’s why knowing the signs of grooming behavior is so important for parents to know.

Recognizing these clues during the early stages can stop grooming behavior and prevent your child from going through a traumatic experience.

To keep your children safe, let’s look at 10 signs of grooming behavior. 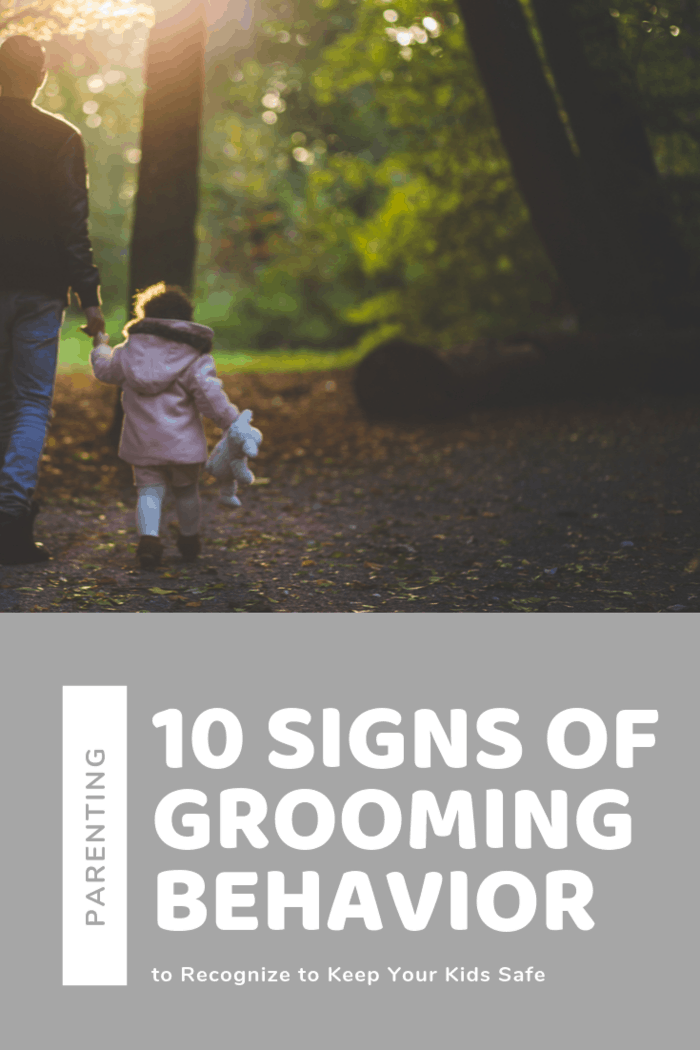 Seeks Out and Gives Special Attention to Your Child

Giving a child attention isn’t something to worry about.

It’s when an adult goes out of their way to be with your child and shower them with special attention that red flags should go up.

The child might live in a single-parent home or one where the parents work long hours.

This gives the predator an opportunity to come in and fill a void.

Has Them Believe They Are BFFs

Establishing a close bond with your child is important to a predator.

They actively seek out what your child’s interests and hobbies are in order to form things they have in common.

When they know what your child likes, a predator will say something like, “That’s my favorite candy too!” or “I love that band, we should go to a concert together!”.

Once they establish that connection, they will have your child believing they are best friends.

Becomes Useful to the Family

One way of doing this is to become useful to the family.

You’ll notice they do anything possible to make your lives easier.

Whether it be offering to give your children rides to school or practice, fixing things around the house, and providing emotional or financial support when needed.

They will go out of their way to become your friend, making you think they can do no wrong.

Giving gifts to a child on a birthday or during the holidays isn’t a red flag.

What is worrisome is if an adult is giving gifts on a regular basis, for no reason at all.

Predators like to give gifts to build trust and develop an emotional connection with a child says Healthy Child.

These gifts can start off simple, such as candy, but develop into more elaborate and expensive items.

Finds Ways to Be Alone with Your Child

A key part of grooming is for a predator to find ways of being alone with your child.

They’ll do this in a way that seems natural or that it’s helping you out.

A predator will offer to babysit a lot.

They may want to take your child out to a movie or ask if your child can come over to their house to play video games.

When an adult expresses unusual interest in being alone with a child that’s not theirs, that’s a red flag.

Convinces Your Child They Have a Special Bond

When a predator targets a vulnerable child, they will do whatever it takes to form a special bond between the two of them.

They might tell them that they understand them more than their parents do.

It’s also common to bond over similar experiences, with a predator saying, “I understand, I felt the same way when I was your age”.

Predators offer understanding and sympathy to gain access to your child and keep them coming back for more.

Has Contact with Your Child When You’re Not Around

Another big red flag is when an adult has regular contact with your child when you’re not around.

That could include phone calls and text messages, but also watch out for contact online.

Sending emails or messaging through social media outlets is a backdoor approach to connecting with your child without you knowing.

Online video games are another way for a predator to gain access to your children.

Touches or Hugs Child in Front of Parents

Testing boundaries is another part of grooming behavior.

In order for a predator to convince a child that touching is ok, they will begin to “innocently” touch a child in front of their parents.

It might begin as a hug, rubbing the back, or holding hands.

Then progress to tickle games or giving massages.

Touching allows the predator to push boundaries and see how far they can go until the child or the parents are uncomfortable.

As the grooming behavior progresses, a predator will want a child to feel less inhibited.

They’ll begin to talk about sex as a way to desensitize them and play on their natural curiosity.

It could involve telling dirty jokes or showing them pornography.

Take notice if your child starts to uncharacteristically talk about sex or display unusual sexual behavior.

If you sense something isn’t right, study what the sex abuse law in your area is so you know your options and rights.

Keeps Secrets with Your Child

A common way a predator likes to gain trust is to have secrets with your child.

It could be something innocent or personal, but they use it to form a bond that only involves the two of them.

Innocent secrets can progress to ones meant to cover up abusive acts.

They’ll say things like, “No one understands except us” to make a child feel isolated.

Talk to your children to keep an open channel of communication.

Make sure they know they can tell you anything without getting into trouble.

Talk to your children to make sure they know what behavior is appropriate and what is not.

Knowing the signs of grooming behavior will help keep your family safe and secure.

In the event, your child is sexually assaulted, act quickly, rape is a crime.

Looking for more ways to keep your children safe at home?

The Website uses Mediavine to manage all third-party advertising on the Website. Mediavine serves content and advertisements when you visit the Website, which may use cookies. Mediavine may collect IP addresses and location to serve personalized ads.  If you would like more information about this practice and to know your choices to opt-in or opt-out of this data collection, please visit http://www.networkadvertising.org/managing/opt_out.asp.
Necessary Always Enabled
Necessary cookies are absolutely essential for the website to function properly. This category only includes cookies that ensures basic functionalities and security features of the website. These cookies do not store any personal information.
Non-necessary
Any cookies that may not be particularly necessary for the website to function and is used specifically to collect user personal data via analytics, ads, other embedded contents are termed as non-necessary cookies. It is mandatory to procure user consent prior to running these cookies on your website.
SAVE & ACCEPT
16 shares
error: Content is protected !!