Our Day Hike Turned into CSI

0shares
First Hike of the Summer
This morning my husband announced we were going hiking. It was his way of putting off teaching a child to ride a two-wheeler. He selected a moderate to advanced hike up Bell’s Canyon. It’s a beautiful hike with two reservoirs and two waterfalls. I refer to the beginning of this hike as the Stair Climber from HELL! It’s steep and unforgiving.
We reached the canyon and parked in the trailhead lot. We geared up, and when we reached the trail entrance, it was closed with Crime Scene Police Tape and a note saying if we wanted to hike, we needed to use the other entrance. My heart was ecstatic when I overheard a couple talking, and the male let the female know that the other trailhead entrance was longer but easier. Snoopy Dance right there.
So we began our hike. The rocks crunched beneath our hiking boots, insects buzzed and cut through the air around us. Leaves swayed, luring us along the trail.
Near the top of one of the hills, we looked down in the canyon, and I asked my husband, “What are all those fire engines doing down there?” He told me it was the crime scene station headquarters as if we see these things on a daily basis.
Here’s what it looked like: 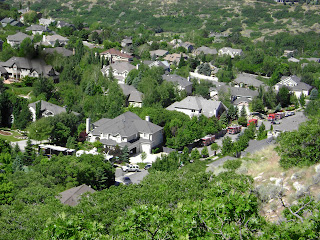 We continued, though my mind was occupied with the reason the crime scene tape was at the first trailhead and why all those fire engines were gathered below.
We reached the first reservoir. It was tranquil, and the weather was nice. The kiddos were in mode, and so we continued along the trail. Then we reached the trail to further ourselves to the waterfall, and we came to more crime scene police tape. 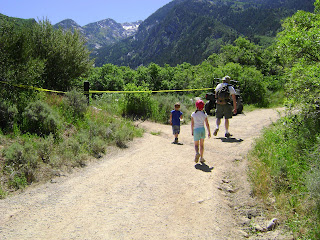 And not far from here, we reached the watershed and were at a dead end. So we turned around and decided we’d find a place by the water to eat our lunch.

We went along a trail and back by the river a couple was eating lunch, and two young women were heading out of the cover. My husband FINALLY asked what I was wanting to know, “Do you know what’s going on with all the police and tape?”

The fellow in the eating lunch couple began to tell my husband that two people had fallen off the waterfall and they were looking for them.

This was when the two young women said, “One of them is our cousin.”

A couple on a first date, Kimberly Evans and Joesph Clark went hiking. At the top of the waterfall, it narrows, and Joseph jumped across, landing safely. Kimberly followed, but slipped, Joseph tried to grab her, and both went down the waterfall. Witnesses retrieved Joseph,  and medical personnel treated him on the scene and then transported him a nearby hospital, with head and hip injuries. Kimberly, the woman who fell from Bell’s Canyon Waterfall, has not been found and is presumed dead.

I wish the Evans family peace. Godspeed to Kimberly Evans. May Joseph Clark’s memory of that moment fade away and may he be blessed with new beginnings.

Thank you for sharing photos of such a beautiful place. Hope you are enjoying and relaxing a bit...a good bit!!!

Both families involved in the accident are in my thoughts and prayers.

What beautiful pictures, and what a sad story! Good luck with that two wheeler :)

I wish it had been a peaceful, uneventful hike for you. I'm sorry to hear there was such a tragedy nearby. :(