A Golden birthday only happens once in your lifetime.

It’s when the date you were born lines up with your age.

For example, if your birth date is February fifth, then your fifth birthday is the golden birthday.

A golden birthday is an opportunity for kids to make what’s already considered a magical day even more special!

Kids will remember this kind of special event for years to come.

If you’re looking forward to throwing a party, you should know that your kids are thrilled to experience this once-in-a-lifetime event.

The party’s theme should be exciting and fun not just for the children themselves, but also for the parents since some of them will surely be attending the party to look after their kids.

A very important tip to remember is to make sure you take your time planning the party.

Kids would willingly participate in the birthday party in all aspects, including the planning process.

Involving your child in the planning and preparation will make them feel the excitement leading up to their special day.

The details of planning a golden birthday party are easy! Consider your color theme, and the number concept can also be used for decorations, invitations, party favors, gold candles, etc.

A golden birthday is a fun way to celebrate the date of your birth and make it a special birthday.

The Tradition of Golden Birthdays:

So? Where did the tradition and idea of a Golden Birthday originate?

The concept of a lucky birthday caught on with her friends and family, spreading across the world.

Pull inspiration from Joan’s genius idea by adding a little extra shine to your next birthday!

What better way for your child to show everyone that it’s their special day than with a custom party shirt outlining their age?

Imagine how amazing they’ll feel when the whole family wears a custom birthday shirt to celebrate their day.

Work with a reputable T-Shirt Printing service to have custom shirts designed for the big day.

Then surprise the birthday boy or girl by having them on when he or she wakes up. 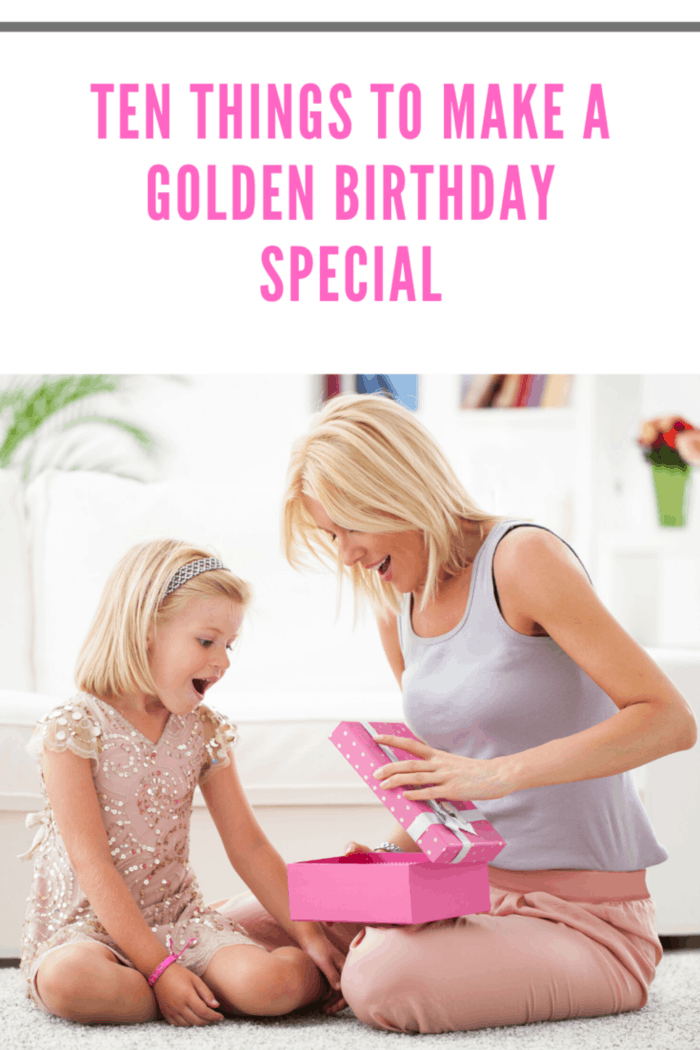 A golden birthday is an occasion you’ll want to remember.

Whether you’re having a family party or a big bash with your child’s friends, create a photo booth for them to pose and get silly with props.

If a professional photographer isn’t in the budget, create your own photo booth with a gold table cloth or streamers.

You can buy a variety of printable props from Etsy or party stores and make your own custom ones with your child’s name. 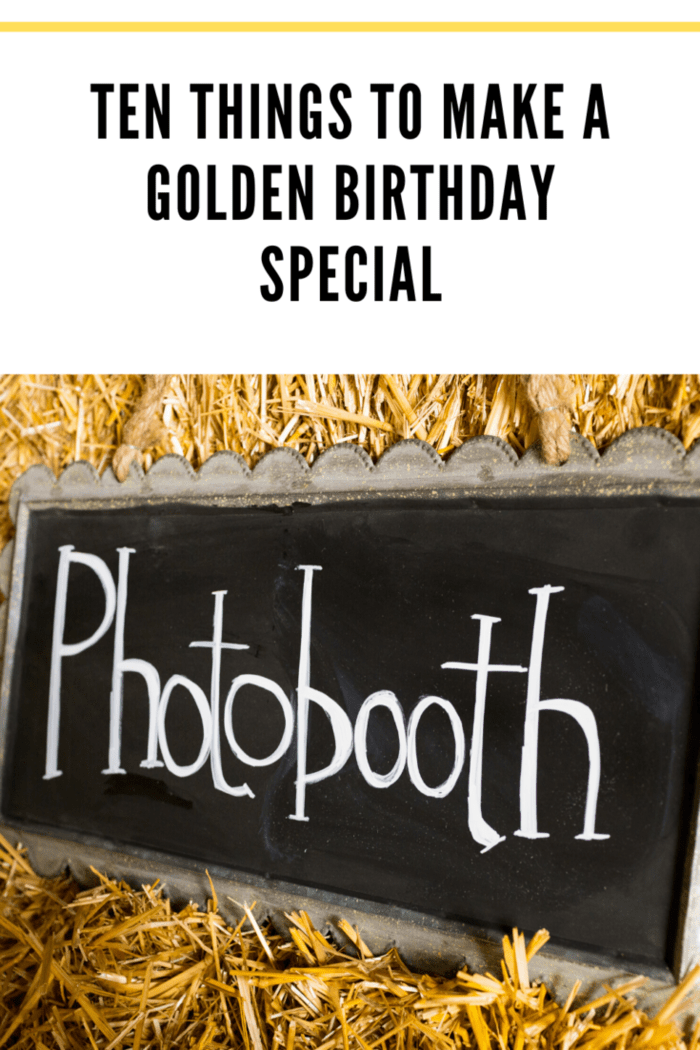 Imagine the joy and excitement on your child’s face when they wake up to a wave of balloons falling in their door.

After they go to bed at night, close the door and tape streamers across the frame.

Then, fill the space with as many golden balloons as you can.

When your child opens the door in the morning, all the balloons will fall in and greet them.

Then they can burst through the streamers and start the day with a smile. 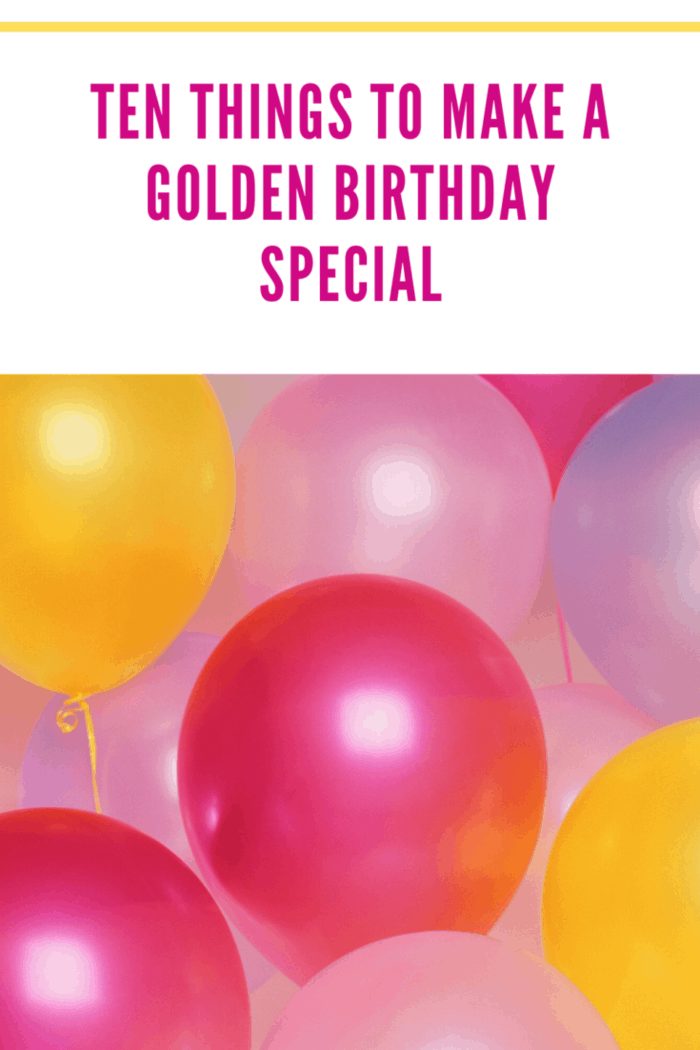 When designing a golden birthday party, it makes sense that the theme should be golden glitz and glam.

Gold paper plates, napkins and utensils, confetti, and balloons are inexpensive golden decorations such as Happy Birthday golden banners or opt for just a touch of gold with accent gold napkins and regular plates or a centerpiece with gold as the accent.

Use a golden ticket as a party invite.

Get gold decorations, plates, and utensils, and use golden wrapping paper when wrapping your gifts.

Buy a cute golden dress or golden tie and top hat for the special guest.

You can even get gold flakes and edible glitter for the cake!

For older kids, ask guests to wear black and white so that the birthday boy or girl can be decked out in gold.

Apart from gold-inspired trinkets, another good idea would be giving birthstones that match the celebrant’s birthday.

This add-on will please all the visitors, being able to bring something meaningful with them.

This theme looks incredible in pictures and works well in large events.

Using the “24K” concept is another way to elaborate on a golden theme.

Ideas here might be to wrap 24 small gifts (perhaps in gold foil), create 24 clues for a scavenger hunt, make a speech with 24 things you love about the birthday celebrant, and gather 24 pieces of advice for family members who love them and know them best.

It’s especially fun if the golden birthday is for turning 24!

About that scavenger hunt– 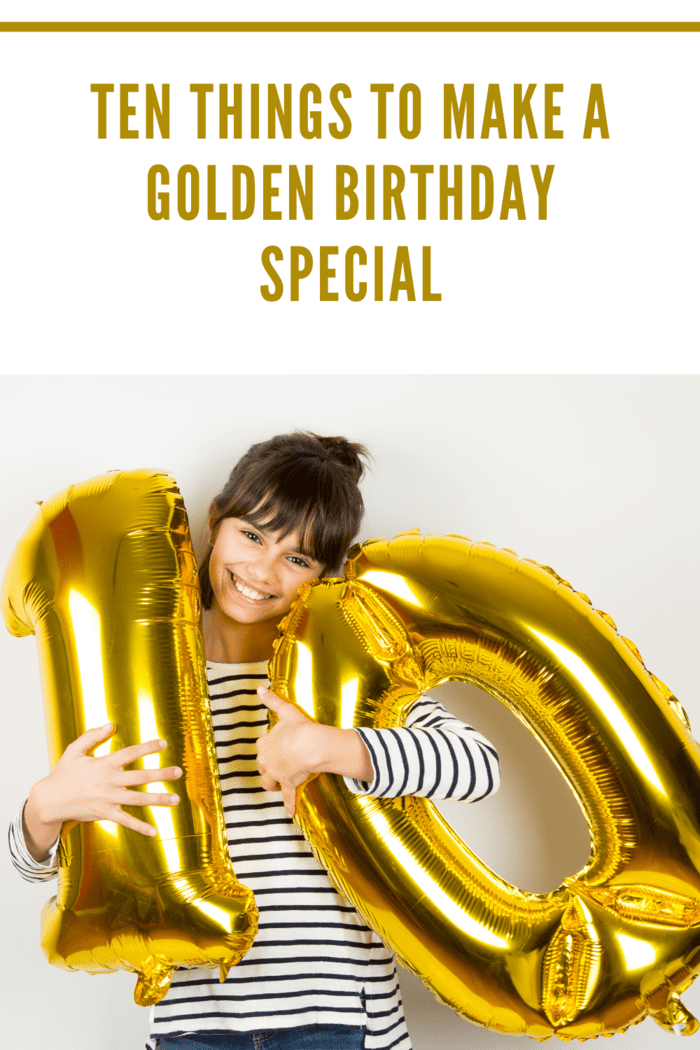 Make the birthday number an underlying theme for the day.

One of the most effective ways to do this is to create a birthday scavenger hunt.

If your child is turning eight, give them an eight-step hunt to find their presents.

Write the clues on golden cards to make it extra special.

A scavenger hunt is also a great way to pass the time at a birthday party.

Get the kids searching for various gold-painted treasures hidden around the home or have the clues lead to the birthday cake.

Nothing says “golden” like the golden age of disco.

Have a disco-themed dance party that kids of any age will love.

Think karaoke or rollerskating with disco-era hits, and give the gues a gold medal or trophy with the best Disco-themed costume.

It will keep the kids active at the party, but it will help them burn off the energy from the cake.

Get a gold disco ball and spraypaint some cheap heart-shaped glasses for guests to wear.

Your golden birthday disco can just be a portion of the party or the overarching theme, complete with costumes.

To keep both the adults and kids entertained during the party, you should hire a professional DJ who can provide a great music mix suitable for all ages.

Make a dance floor and make it a great excuse to have fun and share those dance moves.

Guaranteed, it’s not only the kids who will have themselves dancing away but the parents too.

It’s a great way to have fun while looking after the kids.

The good music (I’m singing to you doing The Hustle) will genuinely make the party memorable.

Unfortunately, popping some bubbly isn’t an option for kids who celebrate their golden birthday before reaching the legal age.

However, there are a lot of sparkling non-alcoholic beverages to use instead.

Soda water or Sprite can be used with a splash of juice to make virgin mimosas.

Create a champagne bar and decorate with told gold pretzels and a basket of treats.

Make it extra special by pouring sparkling water over champagne flutes with cotton candy inside. 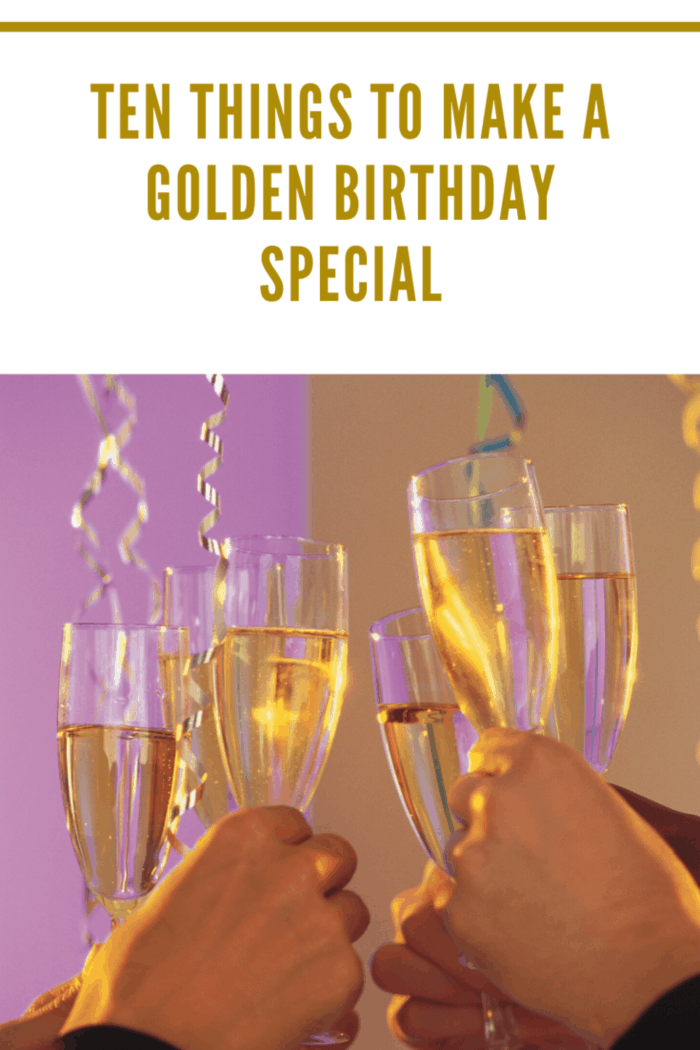 Sports enthusiasts who love competition might enjoy a series of games in the backyard with golden trophies awarded to winners.

If you’re celebrating your child’s golden birthday outside, add an element of a field day with some competitive Olympic-style games.

This is a great opportunity to pull out some classic birthday party games, such as the three-legged race or potato sack race.

Or got with classic field day games like a water balloon toss, tug of war or hula hoop contests. Guests of all ages will love these.

For little birthdays add in other activities like egg-and-spoon or sack races.

Tailor it to a more adult-friendly golden birthday with beer pong or disc golf.

You can also use Olympic events, like the long jump or some basic gymnastics.

Every time a child wins, award them with a gold medal.

Be sure to have various games that give everyone a chance to succeed.

In the end, have a closing ceremony to celebrate the day.

Having a celestial-themed golden birthday is perfect for older children who can have a party in the evening.

Light the party space with twinkle lights and golden balloons in the shape of stars and moons.

Use starry table cloths and tones of navy blue to complete the look.

When serving treats at your celestial party (marthastewart.com is a great resource), make cookies and snacks in the shape of stars and use edible glitter to bring them to life.

Shake things up with a galaxy-themed cake and astronaut food.

Give the birthday boy or girl a starry golden crown to wear as they celebrate.

For an extra special treat, hire a fortune teller or tarot reader to do for-fun readings at the party. Most people, believers are not, get a kick out of a “glimpse” into the future.

As decorating motifs, gold stars, the moon, or the sun evoke celestial parallels to a rare planetary alignment, a great analogy to a golden birthday.

All twelve signs in the zodiac are composed of either fire, water, earth, or air, so if you can incorporate foods or decorations that nod to each of the elements, all the better.

For example, food with a kick of spice such as siracha or buffalo wings can represent fire, seafood menu items such as Sicilian tuna salad is water, and more earthy foods such as mushroom smothered chicken is earth, and cotton candy is air.

Or adorn the cake with a little celestial sparkle with sparklers.

Party favors are a great way to show the guests how much you appreciate them for sharing this day with your child.

Using gold party favors is the cherry on top of the golden birthday celebration and creates an opportunity to give out sugar-free loot bags.

Alternatively, stick with the theme by offering a few golden macrons or cookies instead of mass-produced sugary treats.

You can even send guests home with a plastic champagne flute decorated with gold glitter.

All these considered, it shows that there’s so much you can do to make your child’s golden birthday special.

Don’t wait for later to make some arrangements to make the party extraordinary.

Take some time to talk to your child about their golden birthday and its meaning.

They may not want a gold theme at their party, but like some other ideas for celebrating.

Before even purchasing some supplies for the party, ask them what they want.

Kids easily change their minds, so it’s better to ensure that you’re on the same page.

Moreover, as mentioned, do everything ahead of time.

There’s a long list of tasks to do and only so much one person can handle. 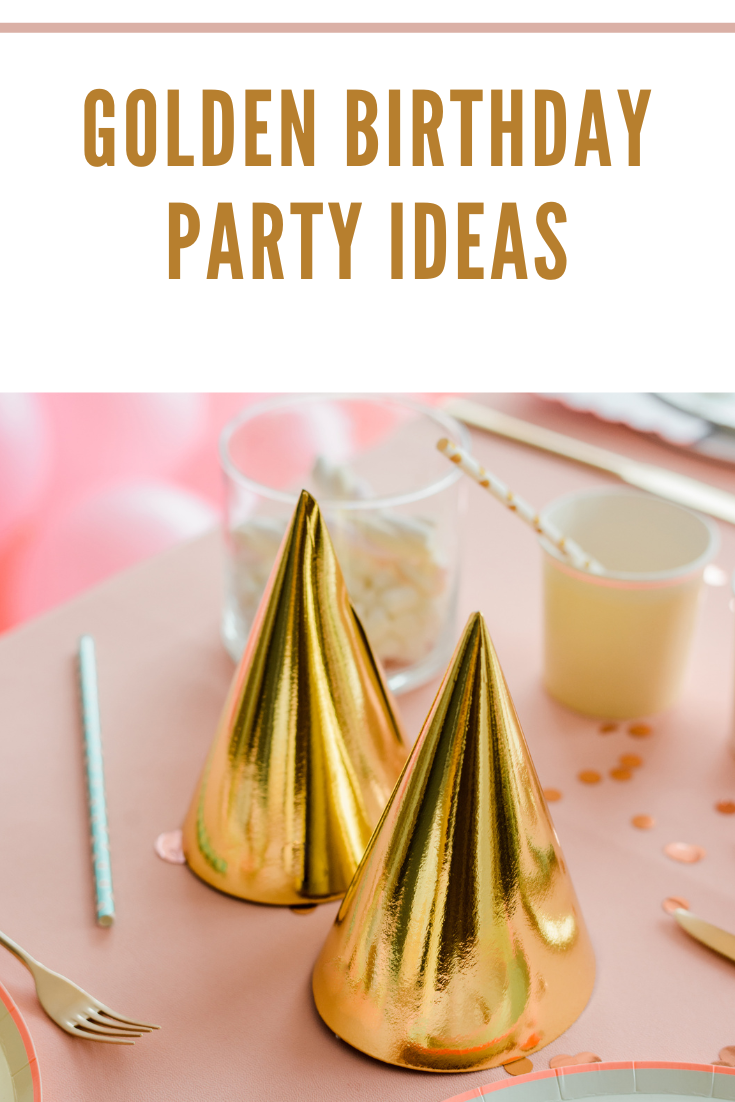 Missed the Golden Birthday? Make It Magic with a double golden birthday

You have another opportunity to celebrate with a “double golden birthday.

We send all our golden birthday wishes for a successful celebration!

The Website uses Mediavine to manage all third-party advertising on the Website. Mediavine serves content and advertisements when you visit the Website, which may use cookies. Mediavine may collect IP addresses and location to serve personalized ads.  If you would like more information about this practice and to know your choices to opt-in or opt-out of this data collection, please visit http://www.networkadvertising.org/managing/opt_out.asp.
Necessary Always Enabled
Necessary cookies are absolutely essential for the website to function properly. This category only includes cookies that ensures basic functionalities and security features of the website. These cookies do not store any personal information.
Non-necessary
Any cookies that may not be particularly necessary for the website to function and is used specifically to collect user personal data via analytics, ads, other embedded contents are termed as non-necessary cookies. It is mandatory to procure user consent prior to running these cookies on your website.
SAVE & ACCEPT
864 shares
error: Content is protected !!