Looking for a large breed dog and wondering how big do cane corsos get?

The Cane Corso is a very impressive breed, both in terms of its strong looks and grand temperament.

History of the Cane Corso

The Corso’s lineage goes back to ancient Roman times when the powerful dogs were Roman war dogs, and the breed’s name roughly translates from the Latin as “bodyguard-dog.”

But there is no doubt about it, the Cane Corso is a big, powerful breed, and it is for no amateur.

The Corso is part of the Mastiff breed of dogs.

Corsos are more lightly built than the Neapolitan Mastiff.

A working dog, corsos have been bred to guard, hunt game, and be a farmhand in rounding up cattle, pits and helping drive the animals to market.

As farming moved to more mechanized, the Corso breed came near extinction.

During the 1970s, the breed was reintroduced.

In 1983 the Society Amatori Cane Corso was formed.

In 1988, Michael Sottile brought the first litter of corsos to the United States.

The International Cane Corso Association was formed in 1993.

In 1996 corsos were recognized by the Federation Cynologique Internationale.

Recognition was granted in 2010 by the American Kennel Club.

So if you have fallen in love with the breed, and are thinking about choosing a perfect Cane Corso puppy, then here are the facts on what size, strength, and shape to prepare for!

Note: If you are seeking one of these purebred dogs, please consider adopting one who is in the care of rescue groups or shelters. 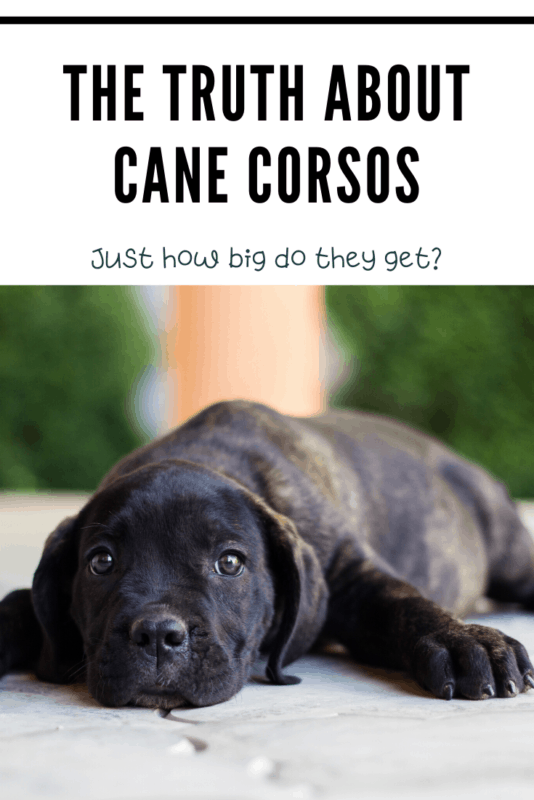 How Big do Cane Corsos Get?

According to Dog Time, the Corso is a large, muscular dog. Males stand 25 to 27.5 inches at the withers; females 23.5 to 26 inches. Weight is proportionate to height and typically ranges from 90 to 120 pounds.

The Official Standard in Europe (FCI) of a properly conformed Cane Corso:

Height at the shoulder blades:

With a slight tolerance allowed. 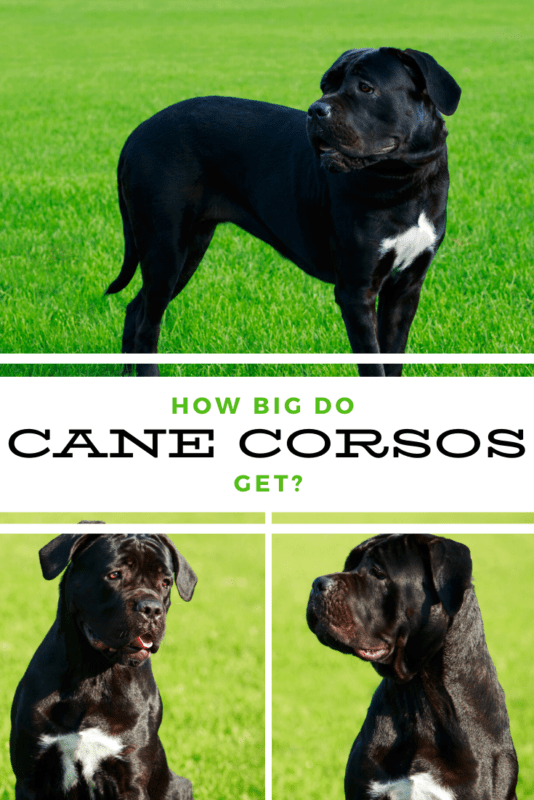 And the FCI officially defines the proper Cane Corsos appearance as such :

Cane Corso dogs are robust and sturdy dogs, nevertheless with some elegance.

Any of these colors may have a brindle pattern: irregular streaks of light and dark color.

The Corso’s ears may be cropped or uncropped. 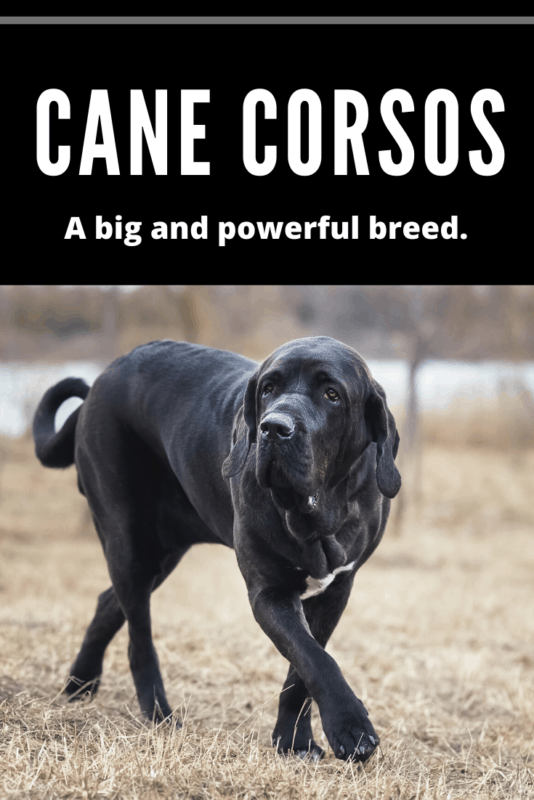 The large breed dog is rectangular in outline and is slightly longer than tall. (The length of the dog is 11% greater than the height of the dog).

The length of the head reaches 36 % of the height at the withers.[1]

The head’s total length reaches 3,6/10 of the height to the withers.

So that is what you can expect from a well-bred Cane Corso from a breeder following the breed’s correct conformation. 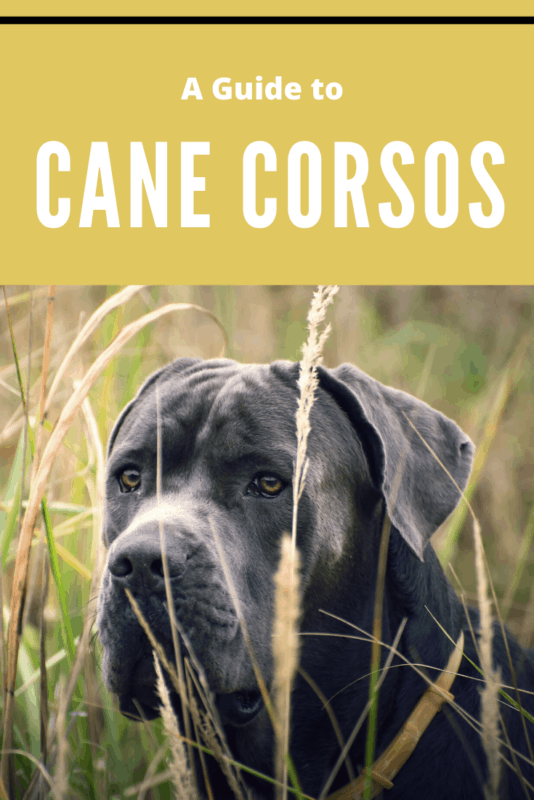 In recent years in America, some people have been breeding the Cane Corsos even bigger and stronger, so much so that this would not fall within the breed’s proper standard.

While only a little taller than the European standard, some of these dogs are bred very differently, with cane Corso breeders aiming for an even more substantial look and these adult Cane Corso weighing 180lb and above.

So be aware that if you are looking at a breeder in the U.S., you may choose a much heavier and stronger Cane Corso than you expect.

Because of these changes, some people claim that outside of Central Europe, the Cane Corso is being incorrectly bred and is losing its proper confirmation.

The Corso is not a good “first dog.”

He requires plenty of proper socialization, training, and physical exercise to be a good companion.

So if you want an ‘official’ standard Cane Corso, you should look first for a Central European breeder.

While this breed is a powerful dog, they do face health issues.

A responsible and reputable breeder will screen puppies for health conditions common within the giant breed:

When it comes to health issues with this giant dog breed, keep in mind dogs of any breed can experience health issues throughout their life.

Pet insurance can help you give your dog the best care when needed and help in the event of unexpected illness or accidents.

Most corsos are affectionate towards all, including small children.

The giant dog breed can be bossy and will dominate a home that lacks boundaries and firm owners.

It is important to let them know the rules and enforce them by training them, using rewards like dog treats.

Without proper training or in the wrong hands, the Corso can become aggressive and be a danger.

In July 2014, two Corsos were in the USAToday after they attacked and killed a jogger.

A Corso understands the tone of voice and responds well to praise and rewards and when he isn’t doing what you want.

Consistency is key with the Corso breed.

This breed enjoys time alone, such as in a confined yard or crate–start this at a young age so they understand when they are adult size.

However, the Corso requires exposure to sights, sounds, people, and experiences from an early age–preferably proper socialization before four months.

This exposure will help him be more well-rounded, friendly, and not have anxiety when left alone.

Corsos are not demonstrative, but they enjoy “talking” to their people with “woo woo woo” sounds, snorts, and other verbalizations.

Cane Corso owners find the breed to be a loyal dog.

It’s a popular choice of dog among giant breeds.

And now you know how big a Cane Corso gets.

The Website uses Mediavine to manage all third-party advertising on the Website. Mediavine serves content and advertisements when you visit the Website, which may use cookies. Mediavine may collect IP addresses and location to serve personalized ads.  If you would like more information about this practice and to know your choices to opt-in or opt-out of this data collection, please visit http://www.networkadvertising.org/managing/opt_out.asp.
Necessary Always Enabled
Necessary cookies are absolutely essential for the website to function properly. This category only includes cookies that ensures basic functionalities and security features of the website. These cookies do not store any personal information.
Non-necessary
Any cookies that may not be particularly necessary for the website to function and is used specifically to collect user personal data via analytics, ads, other embedded contents are termed as non-necessary cookies. It is mandatory to procure user consent prior to running these cookies on your website.
SAVE & ACCEPT
439 shares
error: Content is protected !!