Dreaming of a getaway to a spiritual destination?

Interested in spirituality, PsychicWorld.com utilized the online analytics tool Ahrefs to discover which spiritual destinations are searched for the most on Google globally.

In addition, PsychicWorld.com spoke exclusively to renowned Psychic Inbaal who shared insight on the significance of the highest-ranking destinations. * 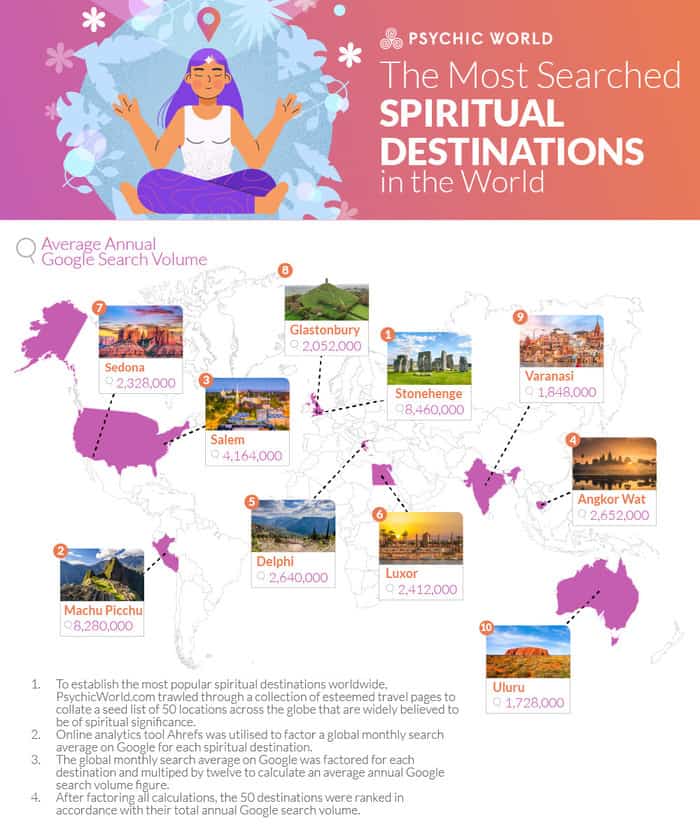 PsychicWorld.com can reveal that Stonehenge in England is the most searched for spiritual destination in the world, with a staggering 8,460,000 Google searches per year – that’s an average of 23,178 searches a day!

Inbaal notes that “this famous site is at the intersection of up to fourteen ley-lines, which are magnetic lines that criss-cross the Earth, and along with them many ancient spiritual sites can be found. Combined with Stonehenge’s alignment to the sunrise at the Summer Solstice and sunset at Midwinter, this site is the epitome of ancient spirituality in the western world.”

Ranking second is Machu Picchu in Peru with an average of 8,280,000 Google searches each year.

According to Inbaal “for those who love a journey, both physical and spiritual, the combination of this citadel’s altitudes, impressive architecture, and the deep cultural history make this a true once-in-a-lifetime experience. Built by the Inca civilization, who worshipped the Sun, this is a place to seek personal solace and motivation – popular for yoga and meditation retreats.”

In third place is Salem in Massachusetts with a yearly average of 4,164,000 Google searches.

“Salem, ‘The Witch City’ has long provided a backdrop for TV and movie escapes such as Bewitched, Hocus Pocus, and Sabrina, however, its historical significance is long overlooked. In the 17th century, this struggling community blamed its misfortune on women who were widely punished for ‘witchcraft’. Decades later Salem has become a place where women can seek spiritual strength from those who came before them.” 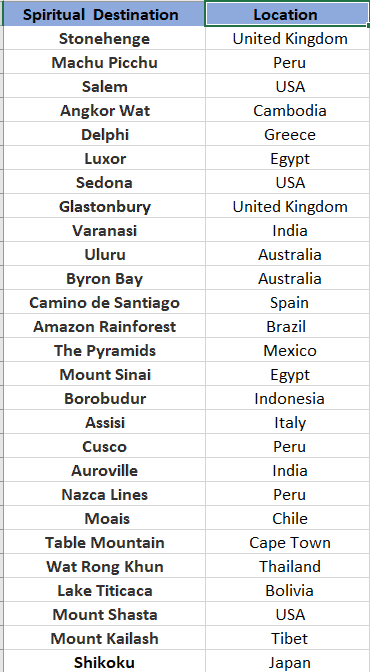