How to Make a Solar Oven (Includes Smores Recipe)

Learn how to make a solar oven (and make smores in it) by repurposing and minimal supplies.

The heat this weekend left nothing to the dreamer that summer had arrived.

It was high 90’s! We’re still doing our yard clean up and getting the summer toys in order.

My kiddos LOVE S’mores. They will do anything with the prospect of getting to make them.

So we put them to work with the promise of a HERSHEY’S CAMP BONDFIRE.

We put a little spin on the smores by building a solar oven.

This would allow us to work, check the progress, and then feast upon S’mores all in good time.

While we love a good campfire, sometimes it’s not practical at home, or even during that campout where there is a HIGH BURN day and campfires are forbidden.

It was during one such day that we decided we weren’t missing out on smores and created a solar oven.

What I love about the activity is that we do it as a family and are creating lasting memories beyond just the making of the smores.

Here’s how we build ours:

Large box (we use a pizza box)

On the top of the box, draw a square that is an inch smaller than the lid all the way around.

Use the craft knife (adults only) to cut through the cardboard along three sides, as shown, and then fold the cardboard up along the uncut line to form a flap.

Glue aluminum foil, shiny side out, to the bottom of the flap, keeping it as wrinkle-free as you can.

Glue another piece of foil to the inside bottom of the box, then tape black construction paper on top of the foil.

Tape clear plastic to the underside of the lid to seal the opening created by the flap. For the best results, the seal should be as airtight as possible.

Place your oven outdoors in direct sunlight with the flap opened toward the sun.

Once you have your oven made, it’s time to get making S’mores! 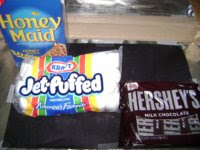 We place one graham cracker flat side up on the black paper and top with two marshmallows.

We did nine at a time.

While the solar oven started toasting the marshmallows.

The kiddos were sent to find the origin of the S’more.

They reported back that the first Smore recipe was found in “Tramping and Trailing with the Girl Scouts” in 1927. It was created (credited to) Loretta Scott Crew, who made them by the campfire for the Girl Scouts.

The marshmallows were gooey, so the kiddos unwrapped the Hershey’s bars and placed one bar on top of one graham cracker. In the solar oven, it took just 3-minutes to melt the chocolate. 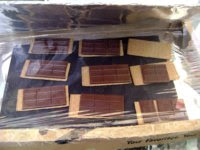 There was giddiness as the adventure of assembling the smores was the next step.

It’s been eighty-five years since the original smores recipe appeared in that Girl Scout book.
It’s a recipe that’s easy and will have everyone gathering around the campfire (or just together) creating new memories.
It’s a delicious way to celebrate family and fun..and the mess doesn’t even freak this mom out!

Carefully, the kiddos smooshed the gooey marshmallows into the melted Hershey’s bars. 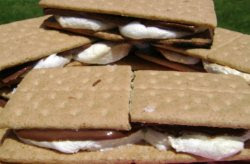 And then, the kiddos were ready to feast!

It’s been eighty-five years since the original smores recipe appeared in that Girl Scout book.
It’s a recipe that’s easy and will have everyone gathering around the campfire (or just together) creating new memories.
It’s a delicious way to celebrate family and fun..and the mess doesn’t even freak this mom out!

Hershey’s is giving families a new reason to enjoy the summertime staple by inviting consumers to gather ’round the virtual fire at Camp Bondfire™.

Now through September 7, S’mores fans nationwide can visit HERSHEY’S CAMP BONDFIRE at the Hershey’s Facebook page and discover new ways to “bond” around the campfire with your family and create S’mores-inspired memories all summer long.

Disclosure of Material Connection: This post is part of my participation in the HERSHEY’S CAMP BONDFIRE campaign I received one or more of the products or services mentioned above for free in the hope that I would mention it on my blog. Regardless, I only recommend products or services I use personally and believe will be good for my readers. I am disclosing this by the Federal Trade Commission’s 16 CFR, Part 255: “Guides Concerning the Use of Endorsements and Testimonials in Advertising.”.