Today’s recipe is this easy recipe for  Southern Chocolate Gravy is a rich, delicious chocolate gravy.

You want it right now.

We serve it over warm biscuits straight from the oven.

My kiddos love it.

In fact, MacKenzie loves it so much that in second grade, when her class was creating a cookbook to celebrate the culture of ethnicities in her class and asked to bring a recipe that was from your heritage, MacKenzie said, “Chocolate Gravy”.

When I explained we weren’t from the south, she said, “we are if that’s what it takes to get that chocolate gravy recipe.”

There was no need to argue, she wanted southern-style chocolate gravy and so I gave her the recipe for the school cookbook.

In all actuality, I think the Chocolate Gravy origin may be indigenous to the Appalachian area.

Though I have also heard it called Soppin’ Gravy further south into Mississippi and Alabama.

Some people have said it comes from Spanish Louisiana and Tennessee fusing with Mexican Style breakfast chocolate.

The Oxford Encyclopedia of Food and Drink in America theorizes that chocolate gravy could have been preserved from Spanish colonies on the East Coast in the 16th and 17th centuries by the mixed-race ethnic group known as the Melungeons.

Growing up, I lived in Appalachia.

It’s a region where the biscuits melt in your mouth and the word gravy is southern for the stuff made in mee-maw’s kitchen in her favorite skillet and thickened to a smooth sauce that smothers everything.

It’s a term that works for savory or sweet gravy

This brings us to my introduction to biscuits with chocolate gravy.

What is Chocolate Gravy?

The basic ingredients in chocolate gravy are flour, cocoa powder, fat, and sugar.

You’ll find chocolate gravy on Sunday morning in the Appalachian Mountain region, or the Missouri Arkansas Ozarks, most commonly in the Southern United States.

I use warm milk to make my chocolate gravy, but some recipes use water.

I think the milk gives it a more rich, silky texture and flavor.

You can substitute almond milk, coconut milk, any nut milk.

You may also want to check out my Pinterest Breakfast Board for other great breakfast foods like this recipe for Appalachian Chocolate Gravy. 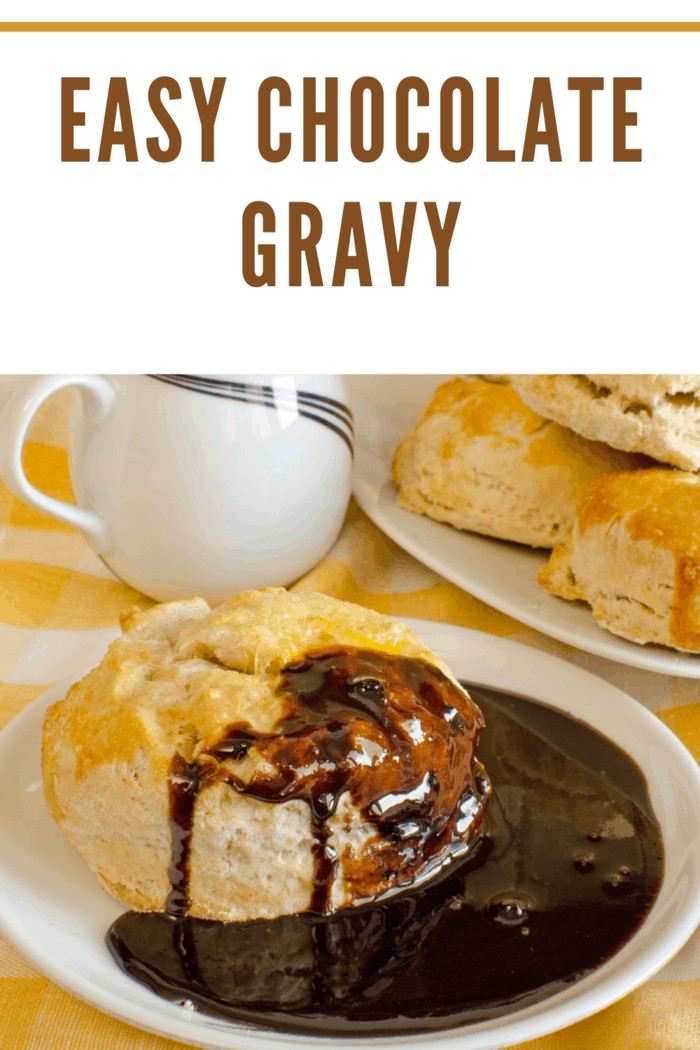 My First Experience with Chocolate Gravy

The first time many people hear of chocolate gravy is that Biscuits and Chocolate Gravy was a regular menu item at Graceland, requested by the King, Elvis Presley.

My first experience with chocolate gravy was when I was in eighth grade I spent the night at my friend, Angie’s house.

We woke up to her mom making biscuits with chocolate gravy.

The kids were all so excited. It was like Christmas for them.

I gathered it was something they only had for special celebrations.

I could only ask, “What is chocolate gravy?”

It was the morning I realized, not all gravy is made with meat. 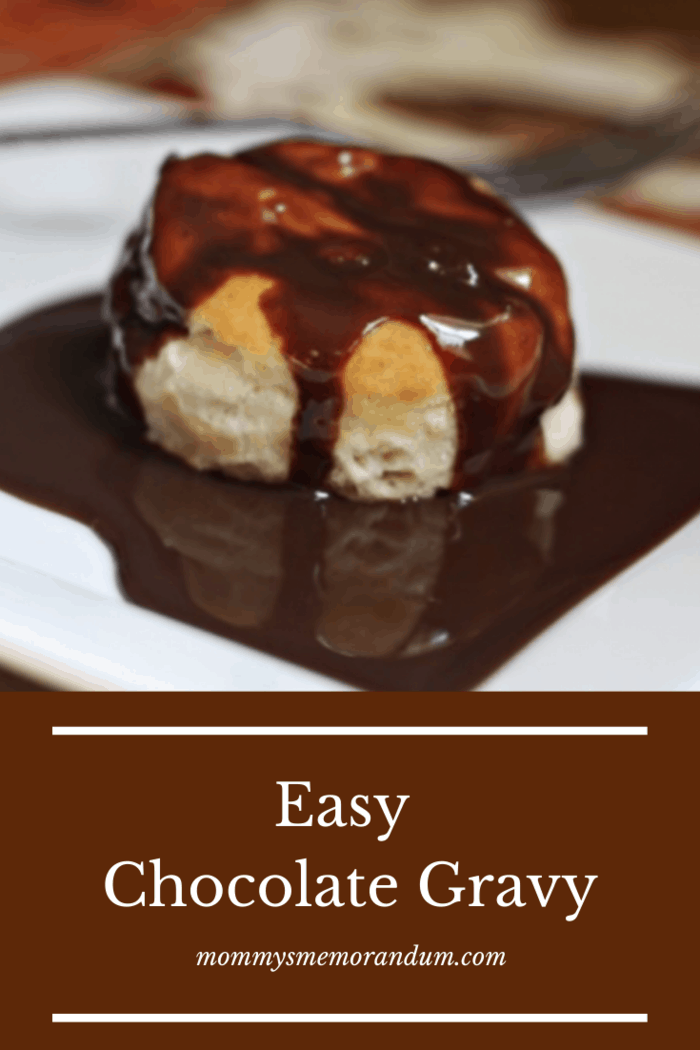 Here is how to make chocolate gravy.

If I may offer you one word of advice, it would be STIR.

Keep stirring with a wire whisk for a smooth, rich gravy.

It also helps keep the chocolate gravy from scorching. 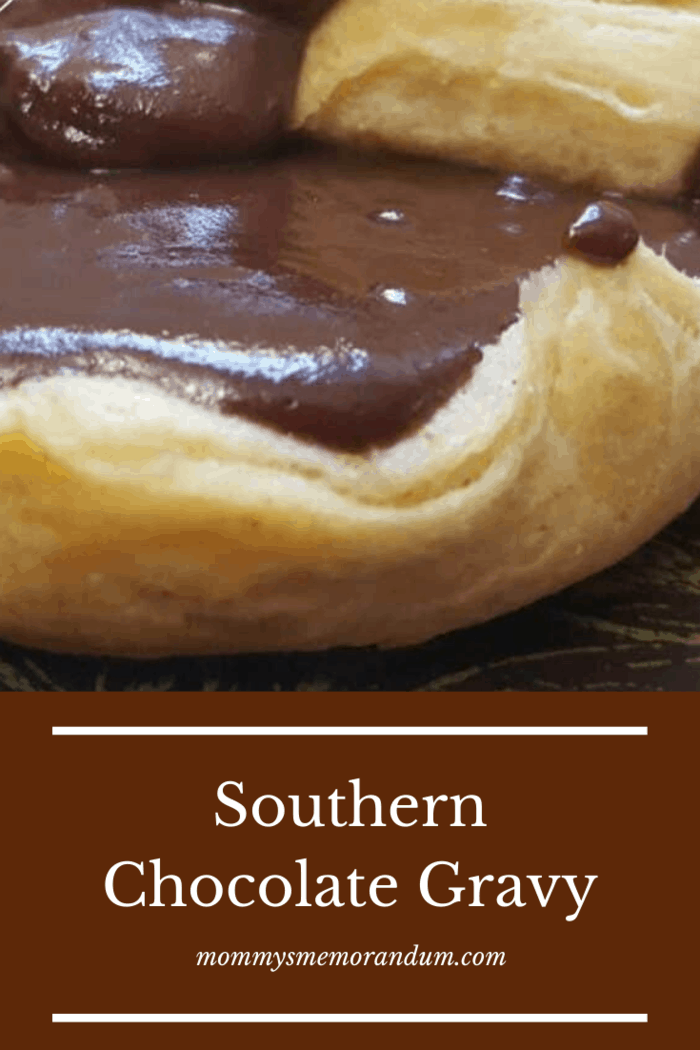 Over medium heat, begin stirring the dry mixture and slowly add the warmed milk in a slow and steady stream, whisking constantly.

Stir until it is thickened to desired consistency.

Remove from burner and add butter and vanilla and whisk until well blended.

You can garnish with fresh fruit like strawberries, berries, peaches, etc.

Give it a try.

Store any leftovers in an airtight container in the refrigerator for up to two days.

MacKenzie still loves her chocolate gravy. So much, so that it was the must-share with her first boyfriend, Cooper.

At our house, this easy chocolate gravy spooned over hot biscuits is the words of love and all things good.

Some folks, like to make chocolate gravy and then at the very end, stir in crumbles of crisp bacon.

Learn how to make perfect bacon in the oven.

Nutritionl information may not be accurate

The Website uses Mediavine to manage all third-party advertising on the Website. Mediavine serves content and advertisements when you visit the Website, which may use cookies. Mediavine may collect IP addresses and location to serve personalized ads.  If you would like more information about this practice and to know your choices to opt-in or opt-out of this data collection, please visit http://www.networkadvertising.org/managing/opt_out.asp.
Necessary Always Enabled
Necessary cookies are absolutely essential for the website to function properly. This category only includes cookies that ensures basic functionalities and security features of the website. These cookies do not store any personal information.
Non-necessary
Any cookies that may not be particularly necessary for the website to function and is used specifically to collect user personal data via analytics, ads, other embedded contents are termed as non-necessary cookies. It is mandatory to procure user consent prior to running these cookies on your website.
SAVE & ACCEPT
Skip to Recipe
6.2K shares
error: Content is protected !!