Li’l Man loves all things dinosaur. No car ride, heading south, is complete without him asking, “Can we please go to the Dinosaur Museum?” His room is dinosaur themed and our nightly reading consists of books from the Dinotopia series. Now he’s roaring about  VTech’s new Switch & Go Dinos!

VTech has long been a brand name we trust. From our first, Jake, to the last, Li’l Man, VTech has been entertaining and helping our children learn. These new Switch & Go Dinosaurs are much more than just Thunder lizards, these dinosaurs are a 2-in-1 play experience, morphing form dinosaur to vehicle and back with ease!

Designed for children ages 3 to 8, this toy line is impressive. In addition to their transforming capabilities the VTech Switch and Go Dinos include an LCD Screen feature for customized animation. Li’l Man (pictured above) demonstrates one of the facial features of his Switch and Go Dino. Here are two more:

There are seven fun dinosaurs to choose from and collect including: 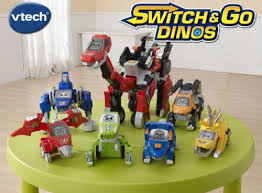 Sliver the T-Rex, T-Don the Pteranodon, Tonn the Stegosaurus and Horns the Triceratops all with a suggested retail price of $15.99

This is Brok when he is a dinosaur. Li’l Man spent the time while I was preparing dinner, pushing him across the kitchen floor and listening to him talk. Dad tried to join the conversation and say that Brachiosaurus was the biggest dinosaur that ever lived, but was quickly corrected and told that was Superasaurus. Still, Brok is a beast, just like his namesake.

Brok entertains and is the luxury dinosaur with motorized neck, flashing lights and his legs actually move up and down like he’s walking as he is pushed! He also has buttons that animate him from his eyes to his voice! Li’l Man loved the “Talk Button” and we heard all 40 phrases while preparing our meal. I laughed when I heard him say, “I’m large and in charge!” the first few times.

As you can see from the photos above, his eyes appear on an LCD screen feature. There are six animated dinosaur expressions.

VTech is known for partnering fun with learning and Brok won’t let you down. He’s programmed with fun dinosaur facts that Li’l Man just eats up. Facts like, “I’m a quadruped. I walk on four legs.”

After dinner, Lil Man spent some time transforming Brok from dinosaur to car carrier. It didn’t take him but a few simple steps to do on his own. I think this was Li’l Man’s favorite way to play. He, at first, was stoked about the small race car that launches a pterodactyl, bu then he discovered the spoiler, when pushed, launches the vehicle flying and he announced, “This is AWESOME!” Add to all this excitment 30 expressions like, “Saddle Up Partner”, along with dino facts and six animated driver faces  and, in vehicle mode as the car is pushed along the LCD screens display motion behind the driver, it’s like watching the scenery zip on by! It is the making of all things fun!

I appreciate the fact that the Switch and Go Dinos include batteries, these however, are meant for demo use only, according to the box and won’t last long. To keep your VTech Switch and Go Dino from going extinct, I recommend picking up extra AA batteries.

The entire Switch & Go Dinos line is now available at www.VTechKids.com and on-shelf at all major retailers ready to be adopted in plenty of time for the holidays!

Switch & Go Dinos are all about transforming kid’s imaginations, and VTech is excited to give kids the opportunity with the Show & Tell with Switch & Go Video Contest! They want your kiddos to use their imaginations to see what cars and dinosaurs they would combine!  It’s a pretty amazing prize pack: a  lifetime supply of toys, your video on Nickelodeon and a viewing party with your friends and family!

From NOW through October 1, visit https://www.facebook.com/vtechtoys/ to enter.

Get Social with VTech using these social media site:

“I participated in a campaign on behalf of Mom Central Consulting for VTech. I received VTech Switch & Go Dinos product samples to facilitate my review.”