School Lunch. We either love it or hate it.

I recently read an article about how the New Nutrition Standards May Make Students Healthier but Hurt the Bottom Line. It was the second paragraph that grabbed my attention:

Hannah is an 8th Grader.

As you may know, I recently attended the School Nutrition Association’s conference in Kansas City. Before that I served two terms as PTA President, and even before that, I am the mom to five children, who have all eaten school cafeteria lunch.

As the PTA President, I can tell you so many situations where “Johnny” came to school Monday morning for breakfast–the first meal he had had since school lunch on Friday. Stories where a teacher or janitor paid for a child’s SECOND lunch because they were so hungry.

Balancing it all falls on the School Nutrition Association.

New national nutrition standards for the National School Lunch Program and the School Breakfast program are, like the article says, bringing healthy changes to school cafeterias.

It’s going to take more than an 8th grader saying “school lunch is disgusting”. It’s going to take more than me calling the principal in a tizzy because I don’t think Smuckers Uncrustables are acceptable. Schools need the support of PARENTS and their communities to make positive changes. Here’s where I direct you to www.TrayTalk.org to find details and examples of successful initiatives.

But what I really want to say is it begins with US–the grown-ups. It is going to take more than us just bagging a lunch for our kiddos.

I met Marilyn Moody, senior director of child nutrition services for the Wake County school system, and we had honest-heart-to-heart discussions about what is happening in school cafeterias. She has a $50 million yearly budget, which $10 million of the comes from snack food sales. This is a la carte, the Federal Government’s regulations don’t impact a la carte until July 1, 2014. In Wake County, the 16th largest school district in the nation, K-5 is currently meeting the regulations, however “our specialty entrees at middle and high will have too much sodium to stand alone as an a la carte purchase.  (As part of the complete meal, they are fine.)”

I also recently mentioned that as new regulations are enforced and created, the cost is passed on to the consumer. the cost of changing a child nutrition label is millions. The changes are things such as a previously serving of bread was .9 ounce and now it is 1.0 ounce. Companies like Kellogg’s had to solve the issue of a cereal serving–old regulation was the same as on a box you might find in your cupboard, to now being done by weight. Think about this..the same serving of say, Raisin Bran is going to have a different weight than Corn Pops. The result, millions of dollars to adjust the container.

School’s can’t afford to NOT comply. Should they be audited and found serving the cereal in the previous regulations containers, they will be fined 27 cents for EVERY breakfast served from that point back to the beginning of school.
Marilyn Moody explains, “The bread weights have already occurred for most items. We will see the increase in costs as we bid our groceries. Lunch, then breakfast, and now a la carte regulations have been introduced gradually.”
Hopefully this explains why Moody said, “That’s why a la carte items are important to us, because we want to hold the price of the entire lunch – the price that the paying customers have to pay – as low as we possibly can to still break even.” in the article I cited above.
It really comes back to us as parents.
When was the last time you, as a parent, sat down and had a school lunch with your child?
As a PTA President I can probably count on one hand how many parents I saw through a school year come in and actually eat the food with their child.
As a mom, I reached out to Marilyn Moody and asked her if she knew the percentage of parents that ate school lunch, at least once a school year, with their child.
“I have no idea how many parents have lunch with their children. We charge parents for food individually–no “adult meals”–so that information isn’t available. We do encourage parents to eat with us and hold promotions such as Grandparents Day, Breakfast with Dads Day, and others. The events are so well received that principals will hold the events by grade levels so that the dining room will hold everyone.”
Here is a photo of a recent event where Central Office staff dressed as breakfast foods. 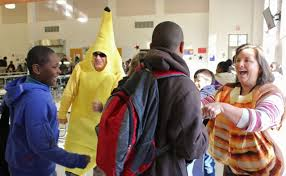 I know here, in Forsyth County, our school permits parents to bring fast food when they come for lunch, others do not. Some principals have a separate dining area for parents who choose to bring “other foods” for lunch. I can see where this is perhaps a “special occasion” but it’s not really giving us as parents the insight we need to make the changes to school lunch we want.
Marilyn Moody shared that “A few years back, the SHAC (School Health Advisory Committee) parents were charged to go to school and take photos of what they saw due to the negative perceptions.”
Here’s two of the photos that helped changed the minds of this small group of influential parents:

Perhaps this is a challenge each parent should take. Go to school lunch with your child. Take pictures. Be the voice of change at your school.
While at the School Nutrition Association Convention, I learned there are regulations that limit calories, fat, sodium, and other guidelines for specific food groups.
The vendors were honest, Schwan’s commented that under 600 mg of sodium left their pizza dough bland, “but we’re working on it”.
Here are recent national program changes that went into effect July 2012:
Schools are required to serve larger portions of fruits and vegetables.

Requires milk to be 1% or nonfat.

Weekly limits on the amount of grains and proteins served with school meals have been temporarily lifted. Congress is currently considering legislation to permanently repeal these weekly grain and protein limits. This legislation would protect calorie maximums, but provide schools more flexibility in menu planning.

Schools receive an additional six cents per lunch (not breakfast) to meet these new standards.

To help ease the financial burden of meeting these new standards, schools were given additional time to meet meal pattern requirements for school breakfast.

Think about all of that. Could you create a meal, that includes all of these items, meet the regulations and do it for $1.15 per family member (not including the cost of milk)?

I encourage each of us to have lunch at least once this upcoming school year. Taste the food. If you don’t like the taste, let someone know. I can tell you walking the SNA convention floor, there are many options. I joined Doug Davis and we were on a quest to find a grab-n-go breakfast–the options were many and there was a huge difference in taste (and in the end, cost).

Seek to be the change that creates a lunch menu at your school that works with your school’s budget and your child’s palate.