Healthy food may be good for you, but nothing tastes as good as grabbing a slice at a classic Chicago pizza joint. Between trips to Shea’s Aquarium, checking into your Chicago hotel and cheering on the team at Wrigley Field, when it’s time to nosh, you come here for the best pizza on the planet.

Here’s where the locals go:

What can you say about a pizza place so good that it took over the whole strip mall where it started out? These days, they call the place Art of Pizza Plaza. The crust is crispy and solid enough to eat with your hands, the sauce is thick without being chunky and the toppings — mostly traditional offerings with a few surprises — come with oregano sprinkled on top. Art of Pizza tastes like the Windy City — ask any local.

Staying in one of the nice but cheap hotels in Chicago and don’t want to venture out? If you’re in Northwest Chi-Town you’re in luck. La Villa isn’t the deep dish pizza you normally associate with Chicago, but it’s still a local favorite. The thin crust is crispy and square-cut, the toppings are piled high and the whole pie is covered with a second thick layer of cheese. Best of all, you can count on it to be hot when it gets there.

They’ve been on the Northwest side forever and there’s a reason for that. If you like your sauce a little on the sweet side, they’re arguably the best pie under $30. If you’re not in the mood for deep dish, go for the football or superball pie and get thin crust, which is always nice and crispy. They’re not as well-known for their pasta dishes, but they probably should be — especially the four cheese mostaccioli. As a plus, it’s easy to get to from lots of the hotels in Chicago.

These are two distinct pizza places, but mentioned together because they were founded by the same guy — Burt Katz — and their pizzas are similar. These aren’t your artisan Chicago pizzas. These are straight-forward, in your face pan pizza with bold flavor. Burt’s requires a reservation with a full 24 hours notice, but it’s worth it — he buys all the ingredients local the same day they’re served. Whatever you order from either place, the best part is the crust, which is always nice and evenly caramelized and crispy, with just the right amount of sauce and cheese. 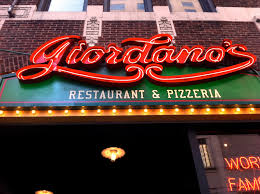 Anybody can tell you how to get to the nearest Giordano’s or to the original Pizzeria Uno’s in River North from any of the hotels in Chicago, but since they’ve franchised out, you can get them elsewhere. When you’re in the Windy City, eat like a local.